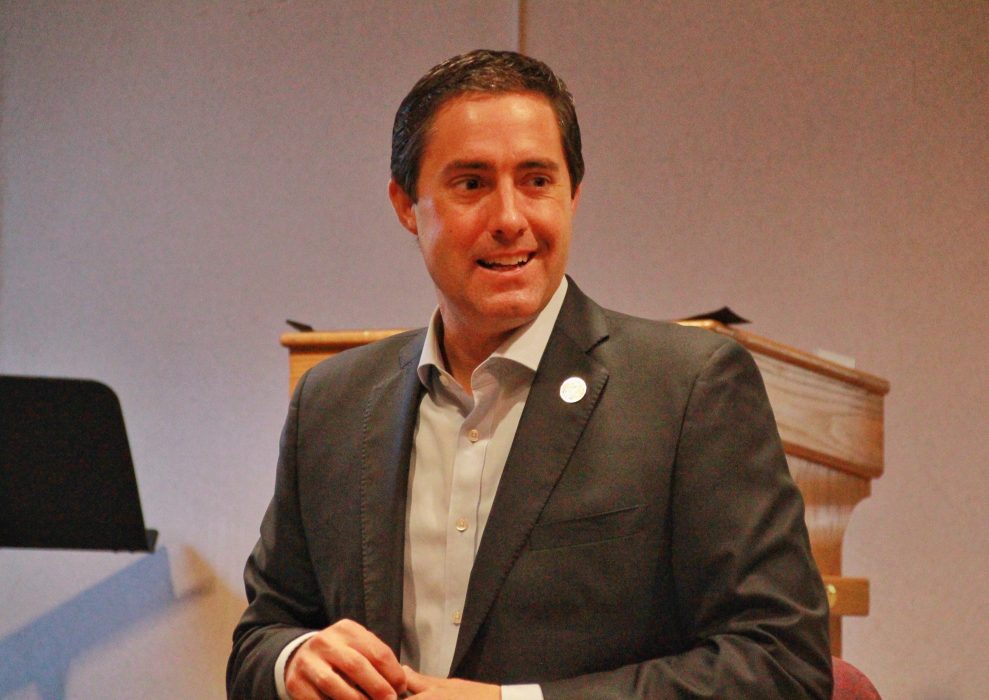 Ohio Secretary of State Frank LaRose came to Franciscan University of Steubenville the morning of Thursday, Oct. 1, to speak to students about voting in the upcoming election.

About a dozen students filled the Fireside Lounge for the event, and LaRose asked all of the students to introduce themselves before beginning his talk and then moving on to a Q&A session.

The first is to be the “front door” for new businesses by processing new business filings, he explained. “I love working with entrepreneurs and small business owners.”

“One of the things that surprises a lot of people about this year is that we’ve actually seen more small business formation this year than we’ve ever seen in our state’s history,” said LaRose. “Anybody that ever bets against the American entrepreneur is always going to be disappointed.”

LaRose’s other role as Secretary of State is to oversee the voting and election process.

LaRose applauded Ohio’s “stable, sound system of elections,” saying that not even the confusion of the pandemic can prevent people from voting.

LaRose focused in on taking advantage of absentee voting, noting that this election season has had a record-breaking number of absentee ballot requests.

“Over 2 million Ohians have already requested an absentee ballot,” he said.

In addition to being able to vote from the comfort of one’s own home, LaRose said that another benefit of absentee voting is that “you can have the most informed ballot you’ve ever cast.”

“Think about this: when you go to vote in person, you kind of have to have your decisions all made and memorized,” he said. “(W)e generally go in there knowing who we want to vote for for president or governor or U.S. senator or any of those high-level races. But when it comes down to those really important local races, like judges and city council and school board, a lot of times people don’t know. … When you vote absentee, you can take a half an hour, you can open the ballot up … and you can google these candidates.”

In addition, Ohio voters are now able to track the status of their absentee ballot through the government’s website, voteohio.gov.

LaRose emphasized to students that every vote counts. He illustrated his point with the story of an Ohio mayor who was chosen via coin flip after the election votes were tied.

“There was a mayor’s race determined by a coin flip because it was a dead tie,” said LaRose. “If one person had showed up to vote in that race, then that would’ve made the difference.”

LaRose ended his talk with three calls to action: register to vote, don’t procrastinate to request an absentee ballot and consider volunteering to work the polls.

LaRose is the 51st Ohio Secretary of State. After growing up in Akron, Ohio, he spent a decade in the military, graduated from Ohio State University, and then served two terms as a state senator for Ohio’s 27th district before being sworn in as Secretary of State in 2019.

“I think the event went very well,” said junior Alex McKenna, one of the event’s organizers.

“We had a good group of people; a lot of students had intriguing questions and pertinent questions for the election, and certainly an excitement for getting involved in the political process.”

This event was sponsored by the Political Science Association.