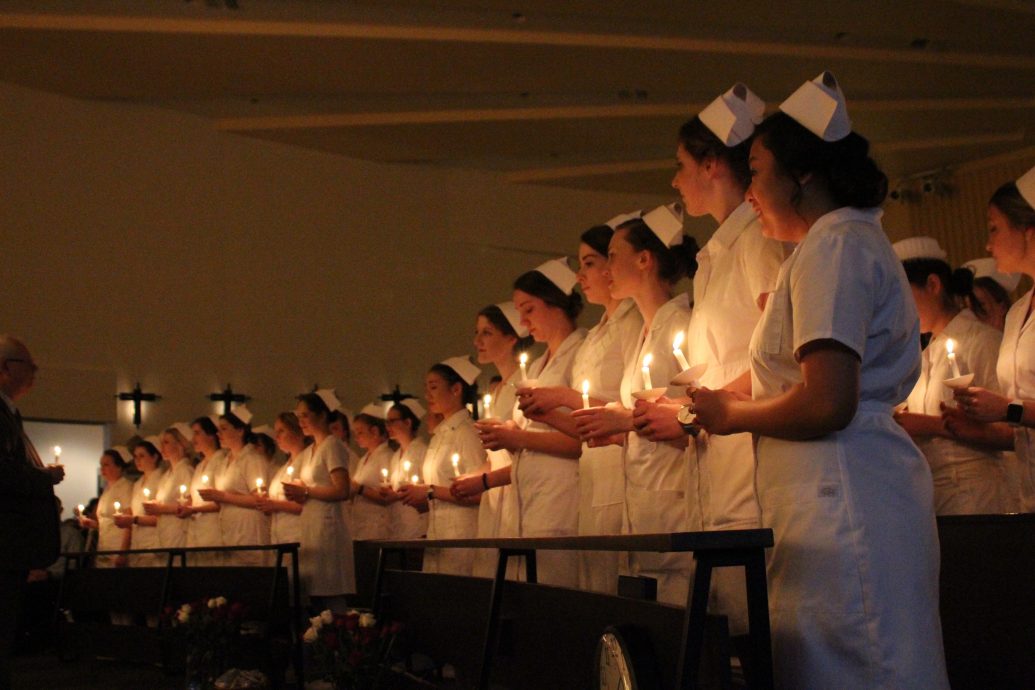 On March 29, the Nursing Class of 2020 was celebrated for the students’ achievements and dedication to the vocation of nursing through the Nursing Candlelight Ceremony in Christ the King Chapel at 7 p.m.

The ceremony opened with a candlelit procession: each student, dressed in his or her crisp white uniform, processed into the chapel individually, carrying a candle. The lights were dim, but the beaming smiles of the students and their visiting families and friends assisted the candles in lighting the whole chapel.

Once all of the nurses-to-be entered, Daniel Kempton, vice president for academic affairs, opened the ceremony, welcoming the students and attendees and supporting the future nurses in their “great and blessed calling.”

Richard J. Antinone, chairperson of the department of nursing, gave the introductory remarks, in which he recognized nursing as a vocation and encouraged the students to use their vocation to build up the culture of life. He also emphasized the difficulty of the program, the achievements of the students and the bond of the class.

Christine Guio Smalley, the education coordinator at Acuity Specialty Hospital of Ohio Valley, spoke next, drawing on her experience as a practicing nurse. She told the future nurses to prepare for life-long learning, to recognize the world-changing impact of their careers and to practice the art of nursing, passing along lessons which have inspired her own career. Finally, she inspired the nurses to draw on their individual talents and be risk-takers, listing the 10 “Be”s of nursing: be kind, be respectful, be flexible, be sincere, be honest, be accountable, be a listener, be a reader, be a teacher and be a student.

After her speech, students read passages from the Gospels of John and Luke, including the parable of the Good Samaritan, and the Rev. Sean O. Sheridan, TOR, gave a reflection and spoke on the significance of the class’s choice of Our Lady of Lourdes as the class patron, emphasizing its appropriateness and encouraging the students to turn to Mary in special way.

Next, the students received individual blessings while a choir sang “Be Still My Soul” and “Sing of Mary.”

Junior Patricia Villegas, the class president, led the congregation in a prayer for the class before the final benediction and recession.

Junior nursing major Katia Gyetvai said, “The procession was … symbolic of how special the ceremony actually is … (and) the readings tied the ceremony to the blessings we received and were a reminder of how we are entering a vocation and not just a profession.”

Gyetvai was also “very touched by the guest speaker. … Her words were so insightful and meaningful to the entire class.”

After years of hard work, the ceremony was both welcomed by and impactful for the participants and was a night they and their families will remember for the rest of their lives.