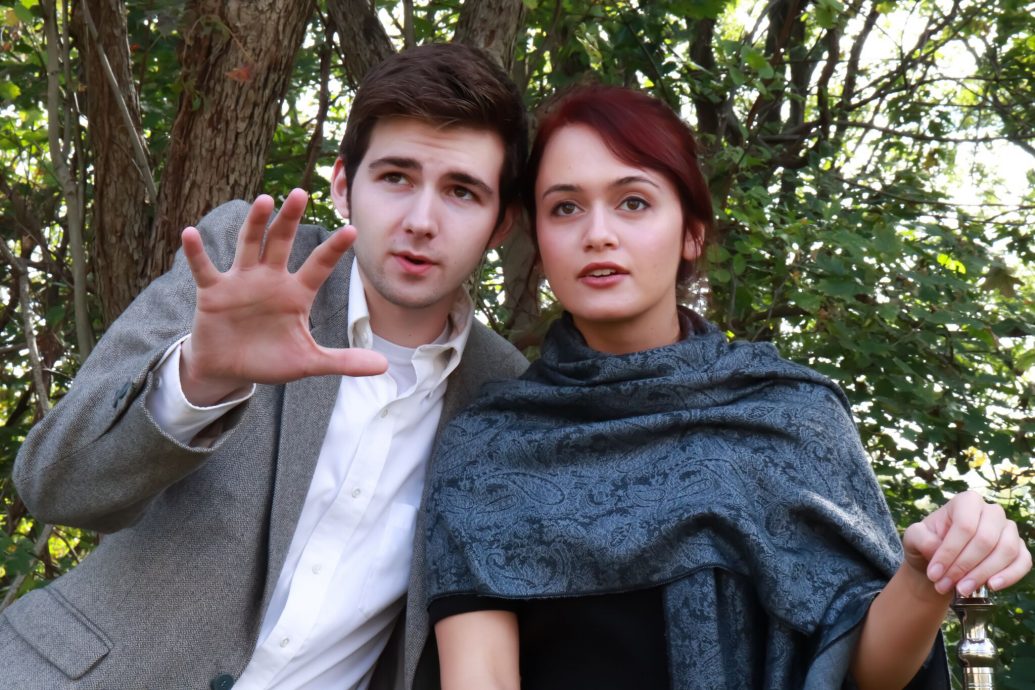 An uneven stage sets the scene of a rocky moral dilemma for the close-knit town portrayed in Anathan Theater’s upcoming production, “The Visit.”

With an unusual cross between comedy and tragedy, this German play, written by Friederich Duerrenmatt and adapted by Maurice Valency, follows a community and the decision it must make: to end the life of the most popular citizen in town for half a billion dollars or to preserve the man’s life and let the town suffer in its squalor.

“It’s such an interesting exploration of how people justify to themselves bad choices,” said Monica Anderson, who holds a doctorate in theater. Anderson chose “The Visit” as a follow-up to the fall production in 2018, “The Government Inspector.”

“I was saving this one potentially for a little bit later because it does have some similarities to the play I did last year,” she said.

Sophomore Thomas Bodoh, who plays Anton Schill, considered “The Visit” to be a sort of alternate universe compared to “The Government Inspector.”

“It’s about a corrupt town, and they’re preparing for the visit of someone very important. You have a lot of similar characteristics between the two,” Bodoh said.

The plot unfolds the harboring tension between the most popular citizen in town, Schill, who has a past to hide, and Clare Zachanassian, a billionaire who returns to the town recovering from her wounded past and now seeking revenge.

Senior Zoe Uhrich, who plays Clare, explained the struggle the billionaire has in the play. “Every villain has something you can sympathize with, but she’s this character who has … a great injustice that has been done to her,” Uhrich said.

Anderson explained the intrigue behind the production. “I find the play to be theatrically entertaining. … It’s also brutally honest about … human behavior,” she said.

Freshman Arianna Shovak, a new member of this year’s cast, said, “It almost gives you whiplash because it has elements of tragedy and comedy in it. One moment, you’ll be laughing at something, and then the next character will say a line, and you’ll be, like, ‘Wow, that got dark really fast.’”

Bodoh explained the twists and surprises in the plot bring a shocking aspect to the play. “‘The Visit’ is a play unlike any that I’ve ever performed before,” said Bodoh, “The play was shocking in some aspects. It had that shock factor to it, and I like that because it really rivets the audience and it rivets me as well.”

While the town of Gullen might not be content with their visitor, the Anathan community could not be more thrilled to welcome new members into the theater family this year.

“The town in many ways is the leading character in this play, and so it’s been nice to have a group that works so well together,” Anderson said. “We have a lot of new students in this cast. Some are theater majors; some are not. Some have a lot of experience; some have little to none.”

Seeing a fresh perspective of the cast and theater program in Anathan Theater, Shovak, who plays the comedic role of one of the two blind men in the town, was excited to be part of the production. “I felt like I fit in right away,” she said.

She appreciated the sense of community within the cast aside from the production. “That was something I was worried about coming into this because theater tends to get a little ‘clique-y,’ but especially here … (the cast) is very tight-knit, and it honestly made coming into this a lot easier,” Shovak said.

With all their hard work, Anderson hoped that it would pay off in the end. “I would hope that as many people as possible would turn out to support the efforts of such a large group of students who have been working on this show since September,” she said. “They worked really hard on this.”

2019-11-04
Previous Post: MIC brother weaves studies and chaplaincy into one ministry
Next Post: Letter to the Editor: Baron ruggers minister to local children with special needs