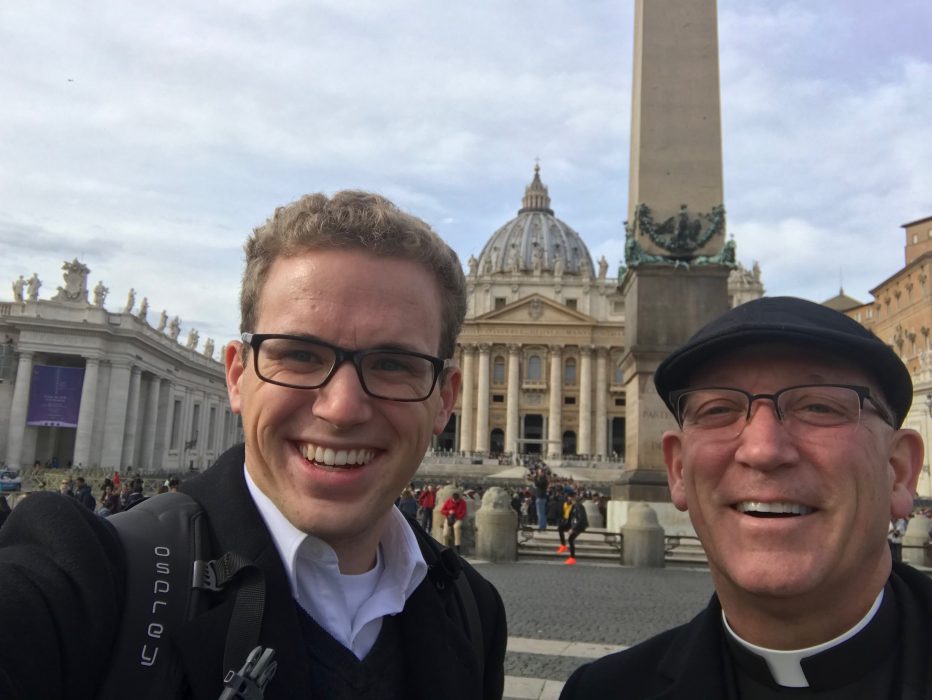 From Missouri to Italy to Gaming, Cole Bestgen, newest residence director of Franciscan University’s Trinity Hall, took a journey around the world before he finally landed in his current home of Steubenville.

“I’m happy to be here; I’m excited to be here,” said Bestgen. “It’s interesting how I got here; it wasn’t planned, just divine providence.”

After spending his undergraduate in the seminary for the archdiocese of St. Louis, Missouri, Bestgen discerned out, saying that he felt that the Lord was calling him to lay down his life in a different way.

Following this big change, one of Bestgen’s four siblings invited him to move to Italy with her, and he found a job at Santi Apostoli, an American mission parish in Florence, Italy.

While in Florence, Bestgen spent his time fostering community and taking students on excursions around Europe, which brought him to Gaming. Bestgen said that visiting the Kartause, Franciscan University of Steubenville’s Austria campus, led him to apply for the position as Trinity’s residence director (RD).

Bestgen plans to pursue his master’s degree in philosophy and business administration starting in the spring, but for now he’s “hanging out” on campus, getting to know students and coworkers.

“It’s kind of neat that sometimes it can take an hour to walk across campus because you just end up bumping into people and having conversations,” Bestgen said. “The biggest thing that I love about Franciscan is the community.”

Franciscan’s community flows from its focus, according to Bestgen. With Christ as its end, such community is much more stable and authentic than striving for community for its own sake, he said.

After arriving on campus without any previous connections, Bestgen said it was incredibly edifying to be welcomed by the community of RDs already on campus.

“I love working with my coworkers. All the other RDs have been incredibly embracing,” said Bestgen. “And then my boss, Catherine Heck, is absolutely amazing. Sometimes I think Catherine is on campus working more with students than I am, and I live here!”

Bestgen was impressed by the amount of work that is exerted to make residence life the best it can be. “There’s a lot that goes into ensuring that our students are successful,” Bestgen said, “and the neat thing about (Franciscan) is that our success is a true sense of flourishing … not just that (the students) receive an education and get a GPA and leave, but a well-rounded formation of the human person.”

When it comes to community life among students, Bestgen said, “Presence is such a huge thing. I’ve got some really amazing seniors in this dorm and them being around is a huge thing.”

He also hopes to contribute himself to the community life of Trinity Hall by bringing people together. “I like hosting events … I’ve got a lot of ideas and then they end up becoming really spur of the moment things,” he said, citing the example of inviting residents over for a meal or movie.

Bestgen’s desire is to help the young men of Trinity grow toward the heart of Christ and to have them desire that growth because he says it is the only way growth can happen. “There’s always more that we can do and we’re always looking at better ways to do that,” he said. “It’s neat to be part of the team that’s doing that.”

One example of Bestgen’s efforts is praying the liturgical hour of Night Prayer every evening at 11 p.m., which he said has been very successful in attracting residents.

Bestgen said that an easy way to get involved in facilitating growth on campus is to spend more time being present in one’s environment. “Instead of binging Netflix for an evening, walk down and talk to someone,” Bestgen recommended. “You only have four years here (and) when you put those other things aside, it’s amazing how much room you have (for other activities).”

As for himself, Bestgen is embracing the Franciscan University campus and family. He is excited to take advantage of the local hiking and backpacking, and he is enjoying getting to know the Franciscan family.

“I like the rugby guys,” Bestgey said. “They’re good guys.”

Bestgen replaced Ian Gill – who is now the RD of St. Junipero Serra Hall – as Trinity’s RD, and he is grateful for all the 170 Trinity residents, whom he looks forward to serving throughout the rest of the year.