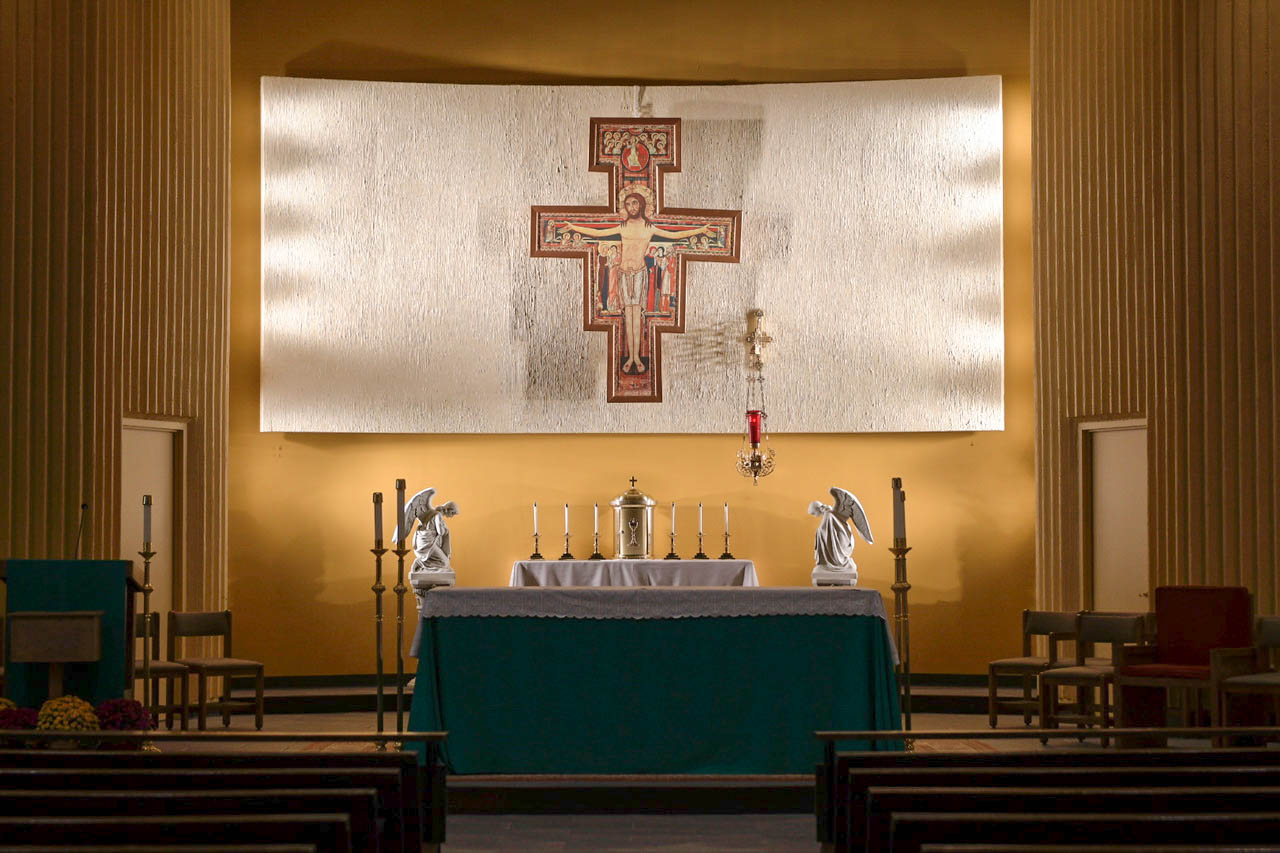 The recent renovations of Christ the King Chapel, the iconic spiritual hub for Franciscan University of Steubenville, have managed to please everyone with the chapel’s new features and redesigned layout.

This past summer, starting the day after spring graduation in May and ending June 8, the chapel underwent several changes, including new paint, new carpet, and re-sanded pews. After nearly three weeks of work, Christ the King was refurbished, making the nearly 50-year-old chapel look new again.

Christ the King has been a landmark of Franciscan University since 1969, and several generations of students, faculty and families have attended Mass at this historic chapel. Its recognizable design is a prominent feature in the university’s logo. However, after 48 years, the chapel needed several upgrades to make sure that it lasts another 50.

Chuck White, Franciscan’s manager of facility maintenance, led the improvements of Christ the King Chapel. He was in charge of hiring the contractors, coordinating with the Physical Plant department, buying the supplies and overseeing the restorations. Several contractors, including the MacLachlan, Cornelius, & Filoni Architects and Panhandle Cleaning and Renovation, were hired to clean the chapel, including the air ducts, and transform the chapel into a beautiful place of worship.

“I like it,” said White when asked about his thoughts on the new look. “Way past due.”

The changes to Christ the King have surpassed all expectations. Not only were the pews, walls and floors redone, but the overall layout of the chapel has shifted as well. One noticeable change is the moving of the tabernacle from the side of the chapel to the very center, behind the altar.

This transition to a more visible location helps to put more focus on God and worship. Upperclassmen and staff were especially excited about this change. “Thank God they put Jesus in the middle!” said senior Alicia Libetti.

Because of the tabernacle shift, the choir stand has now moved from the front side of the altar to the rear of the chapel, again guiding more focus to the Blessed Sacrament. Even though they are currently standing in the back, the Rev. Sean O. Sheridan, TOR, hopes to get a riser for music ministry and their equipment, according to White.

Another big addition to the Christ the King Chapel is the new Marian shrine where the adoration chapel used to be. The shrine features a simple Mary statue surrounded by flowers, a feature which also delighted students. One such student, junior Cindy Wolfe, said, “The new image of Mary invites you with outstretched arms to embrace simplicity, humility and love. … She looks down lovingly upon us and listens to our every prayer.”

Along with the new décor, the chapel has also gotten approval for a new sound system and a change in the lighting of the altar area, approved by the Rev. Shawn Roberson, TOR, the university chaplain. The lights now shine on the tabernacle, guiding one’s attention towards the center of the chapel, as well as giving it a warm and inviting feeling.

Not only is the inside of Christ the King refurbished, but the outside will be as well. Mariani & Richards Inc. was hired to clean the outside walls as well as apply a color coating around the stained glass windows. After this, physical plant HVAC technicians will replace two old roof top units with new ones once the weather cools down.

However, even though the chapel has undergone these revisions, White says that there are still plans for another chapel within the next few years. The university is still in the decision process for this project. Until then, the beautiful Christ the King Chapel will serve students, faculty and visitors for years to come.