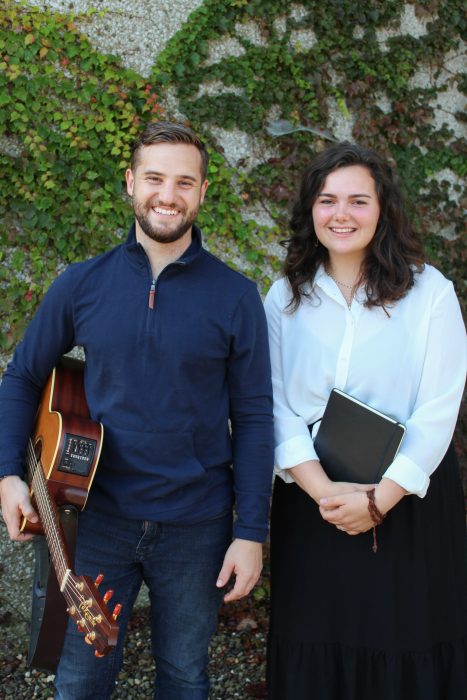 Music ministry has grown two new heads this year. What was originally one position has now split into two to create a deeper experience of the Mass, praise and worship and Festivals of Praise, or FOPs.

“I work more with just the day-to-day Mass groups and sort of just taking care of practical needs,” Salamida said.

She helps with the auditions for music ministry, checks the calendar to keep everyone aware of any changes and sees that everything involving music is in order for Mass.

Speaking about his role, von Arx said, “I feel more like a youth minister as it pertains to music on campus.” His position focuses on meeting up with the groups and helping them grow into a musical setting.

Von Arx said he appreciates helping the students be comfortable on stage and teaching them to lead others in prayer through music.

“(The students) want to pray and they pray so beautifully,” he said. “Then there is sometimes a little bit of a gap and a divide between having that for yourself but then feeling confident where you can lead other people in that.”

He said it can be daunting for students to perform on stage in the Finnegan Fieldhouse in front of so many people. “It’s all about praying and helping other people enter into what’s going on in the Mass. It’s cool to be able to give people that little encouragement.”

By giving students confidence to play in the fieldhouse for Mass, von Arx hopes to get students on the stage for the FOPs. “I’m just trying to get students up to speed (for when) they can lead those again. It’s kind of a specific skill set,” he said.

Salamida said, “The heart of it is the same … but there was just such an invitation from the Lord to go deeper with music ministry. There was just an opportunity to really encounter the students.”

When university administration decided to expand music ministry, it allowed Salamida and von Arx more freedom in their positions to be present to the ministry itself.

“Both of us were heavily involved with music ministry when we were students here and so we had a pretty good understanding of how it worked already,” said von Arx.

“We probably, with two of us here, are able to divvy up the workload in a way that allows us to be present to the students,” he said.

“We want people to grow and pray and to just feel free!” she said.

Another change to music ministry this year is the addition of music workshops for those students who did not make it onto a Mass group this semester.

“Lot’s of students auditioned for music ministry,” said von Arx. “There were only so many spots and some of those decisions were really, really hard. … We felt like we turned students away for something so minor that they could’ve easily been on a Mass group.”

The workshops are designed to help students who aren’t in music ministry grow in their musical abilities. The workshops focus on guitar, vocals and other instruments. There will be four sessions in November, with more information coming soon.

“My hope is that the students are attentive to the Holy Spirit working in their hearts as they pray with the music … and that we are able to serve our brothers and sisters on campus as they seek to encounter the Lord,” von Arx said.