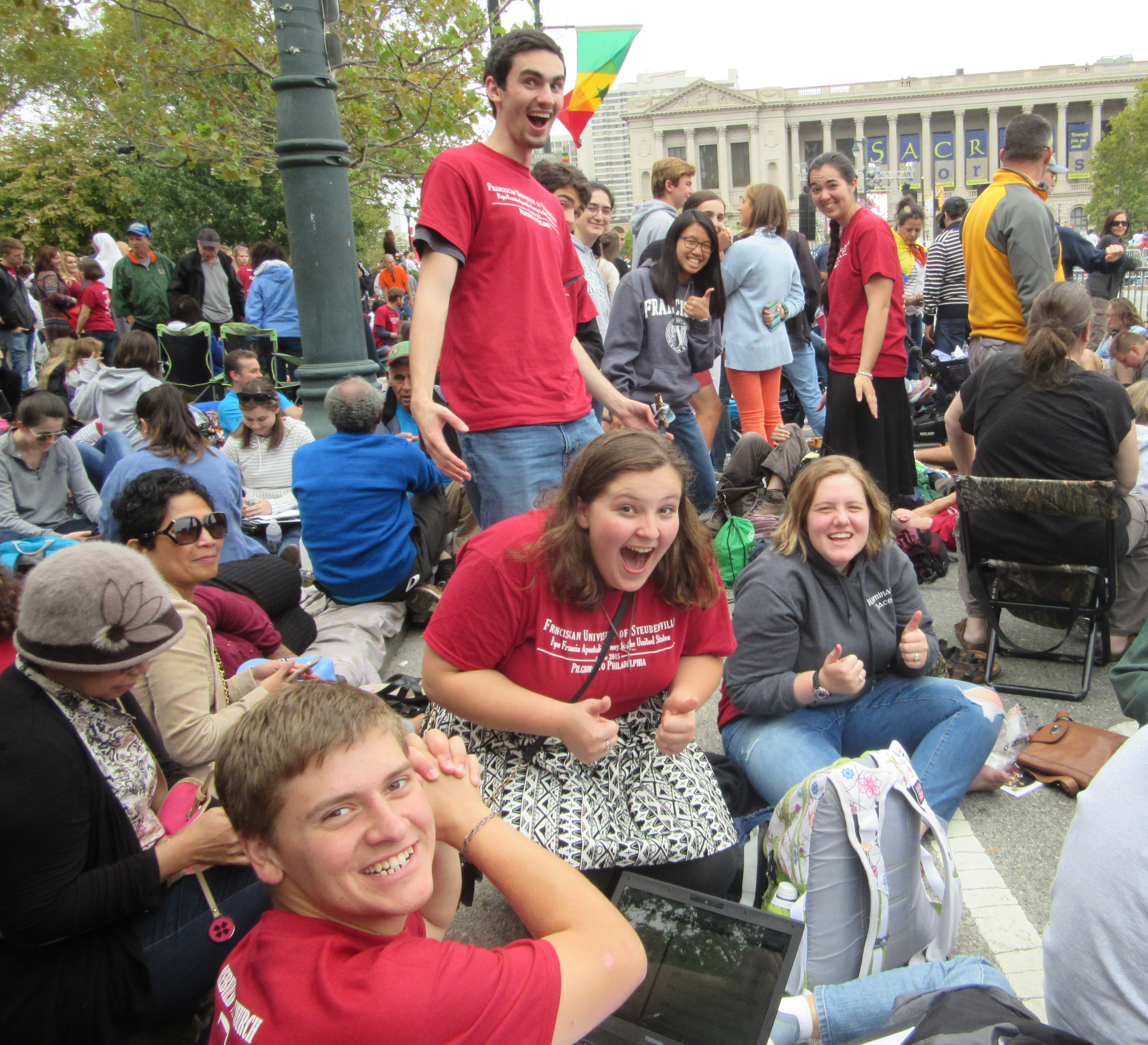 Students from Franciscan University traveled to Philadelphia on Sept. 27 to attend an open-air Mass celebrated by Pope Francis, to hear his message about familial love and to receive Jesus in the Eucharist.

“There was kind of (a) cool parallel that happened,” said freshman Rachel Shumar. “We pressed against the bars and each other to see the pope and get closer, then the same thing happened with Jesus. We pressed close to receive him.”

She continued, “Getting to have Communion at Mass was a big deal; we didn’t think we would get it.”

Shumar, a theology and catechetics major, was one of the 220 students who traveled to Philadelphia. The pilgrims from Franciscan got a quick glimpse of Francis as he greeted the crowds in his iconic “popemobile.”

The altar for Mass was not in the group’s line of vision, but large screens and speakers were posted throughout the parkway so all of the people present could participate. There has not been a final count of how many people were present at the Mass, but officials expected numbers to reach up to 1.2 million people in the 33-acre space.

In his homily, Francis emphasized that love within a family “is shown by little things, by attention to small daily signs which make us feel at home.” He cited examples including giving a loved one a hug after a long day of work, making meals for loved ones and blessings before going to sleep.

“These little gestures are those we learn at home, in the family; they get lost amid all the other things we do, yet they do make each day different,” he said.

Students loaded four buses at 12:30 a.m. on Sunday. Once they were in the city, they had to walk from where the buses were parked at the Sports Complex to Benjamin Franklin Parkway where Mass was being held. They arrived back on campus at 4:00 a.m. on Monday.

In the middle of their 5- mile walk, the pilgrims stopped at the Shrine of Saint Rita of Cascia to receive a blessing from the Augustinian monks who manage the shrine.

“When the pope comes, expect surprises,” said the Rev. Gregory Plow, TOR, during a prayer service prior to the buses’ departure. “This is not a field trip; it’s a pilgrimage. Be prepared to offer up any pains, joy and sufferings. The risen Jesus walks with us.”

The eighth World Meeting of Families was Francis’ final stop on his 10-day apostolic journey. Besides Philadelphia, he visited Cuba, Washington, D.C., New York City and the United Nations Headquarters.

The World Meeting of Families was originally started in Rome by Pope Saint John Paul II in 1994. His goal was to strengthen the bonds of the family through faith and love. It is the largest gathering of Catholic families in the world. It is hosted every three years, the next one being in 2018 in Dublin, Ireland. The universal church turned much of its attention towards this year’s meeting in anticipation for the Synod of Bishops on the family occurring this October in Rome.