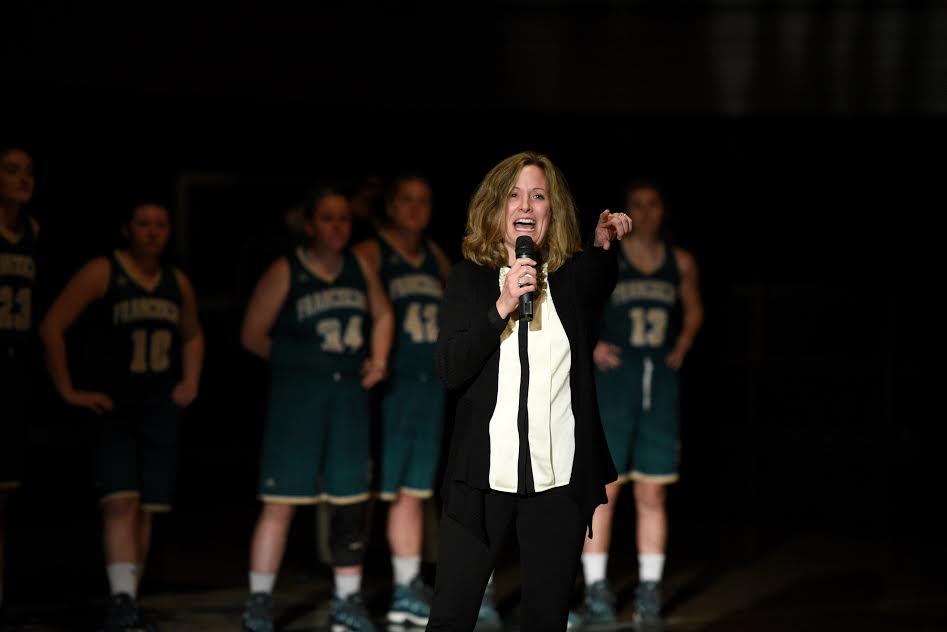 Midnight Madness ushered in the basketball season Saturday, Oct. 22, with students lining up outside to be the first through the Finnegan Fieldhouse doors at 10 p.m.

Free pizza and T-shirts greeted students as they entered the gym to celebrate the basketball season’s kick off. The crowd quickly filled the bleachers in anticipation for the night’s events.

The night included musical performances by senior Mary Ciaccia singing “God Bless America” and the trio Wine in a Whiskey Barrel, who opened and closed the night. Their final performance of a mash-up they called “Shut Up and Dance with Somebody” brought students onto the court to dance. Performances by Franciscan’s dance team the Baronettes and baton-twirler Clarice Orteza also drew cheers from the crowd.

Students had the chance to show their skills on the court in a game of knock-out and in a free throw competition, where two students won gift cards provided by Student Government. The “Superfan” competition was another chance to win a prize, with the crowd judging which student had the most school spirit.

Joe Wallace, new head coach for the men’s basketball team, told the crowd that at Franciscan University, “the school spirit is unbelievable.”

He said, “We have the best home-court advantage in the Allegheny Mountain conference.”

Suzy Delaney, head coach for the women’s team, thanked students for coming out to show support. She encouraged students to come to the first games of the season.

Huge cheers greeted the men’s and women’s teams as they made their debut at the end of the night. The teams went head to head in a free throw competition, with the men winning by a narrow margin of 40 to 38.

Freshman Cianna Vaughan, member of the team, said that she is excited for the season. She said she feels confident in the team and that their “coach is awesome.”

“I think our team is going to be really close this year, too,” said freshman Rose Judge. “All the girls are really good, everyone gets along.”

The Rev. Nathan Malavolti, TOR, opened the celebration with a prayer for the players. Then four ROTC members provided the Color Guard during the National Anthem.

Sophomore Patrick O’Brien said that he’s excited to attend the games this season. He’s looking forward to being able to “help them out and cheer them on.”

2016-10-31
Previous Post: Conservative Column: Voting with a conscience, voting pro-life
Next Post: Behind the scenes of “Much Ado”