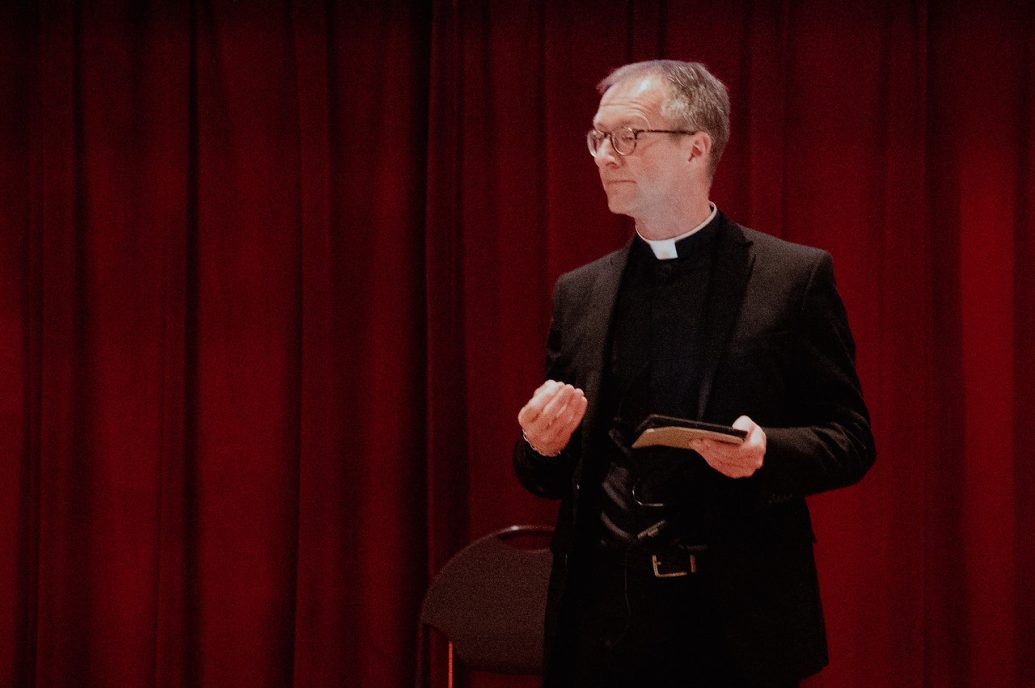 A guest speaker said it is important to have a method to avoid distractions during prayer and offered guidelines for four stages to master mental prayer at a talk Friday at 7 p.m. in the Gentile Gallery.

The Rev. Dylan James, professor of moral theology at Pontifical College Josephinum in Columbus, Ohio, gave a talk titled “The Benefits of Mental Prayer: Why and How according to St. Theresa of Avila” that outlined mental prayer as an intimate friendship and conversation with God.

James said vocal prayer, on the other hand, is recited and read prayers.

“If you’re saying a vocal prayer properly, it becomes a mental prayer,” he said.

The first step in James’ method is concentration. In this step, the person praying should first ask God to help him or her pray, he said. The person should ask the Holy Spirit to pray with him or her.

James said the second step to mental prayer is consideration, which is when a person ponders the chosen topic.

“The aim of this stage of mental prayer is to find something for conversation with the Lord,” James said.

The third step is a conversation, which is discussing the topic with God.

The last stage of mental prayer is the conclusion, when the person praying condenses his or her conversation into specific resolutions. James suggested creating a motto that can be thought about throughout the day.

After addressing the steps of the method, James spoke about the importance of a plan of life.

He said, “You need to personally, for yourself, make a plan about how to become a saint.”

James gave five suggestions for this plan of life. He recommended weekly Mass, a daily rosary, regular confessions, daily spiritual reading and mental prayer. He also gave examples for beginners, such as saying a decade of the rosary at different times throughout the day instead of the rosary altogether.

Sophomore Maise Leonard said, “It gave fruitful advice on how to engage in mental prayer.”

The talk was sponsored by Residence Life.