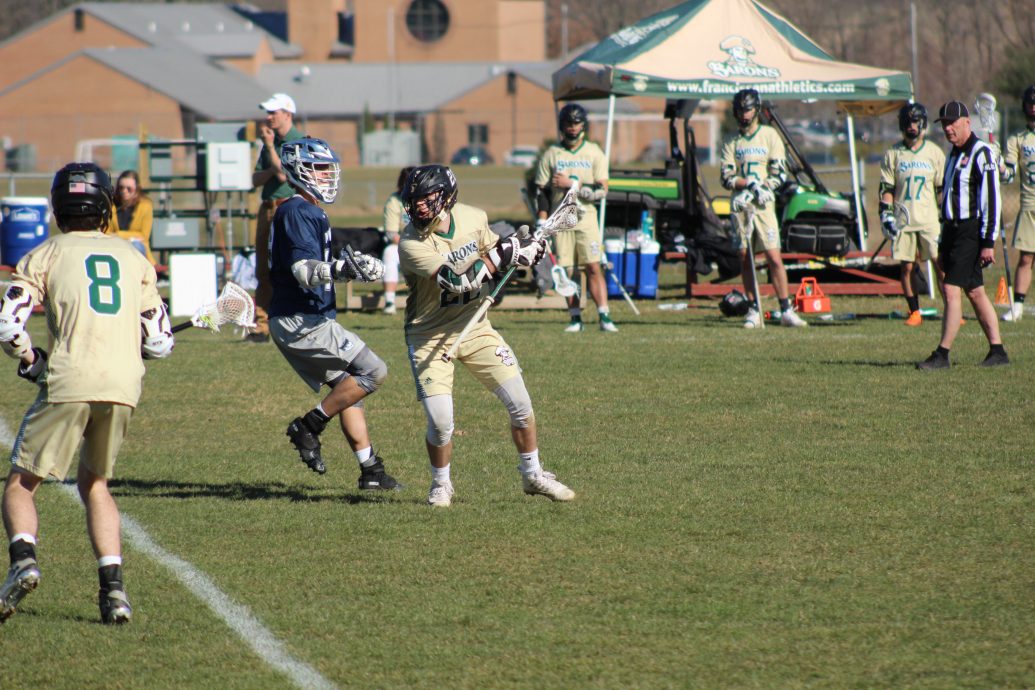 Despite a fourth quarter comeback attempt, the Franciscan University of Steubenville men’s lacrosse team fell to Marietta College 18-6 on Wednesday, March 28, at 4 p.m.

The Barons had a strong start as senior midfielder Danny McCartney scored the first two goals of the game within the first five minutes, giving the Barons a 2-0 lead. But the Pioneers answered back with four quick ones of their own. Marietta scored four goals before the end of the first quarter, making the score 4-2 going into the second.

The Pioneers continued their dominating performance in the second quarter, scoring another six consecutive goals and stretching their lead to 10-2 at halftime.

Despite Marietta’s 10-point run, McCartney refused to let up, and he halted the Pioneer’s streak, scoring his third goal of the game and 19th goal of the season. The Pioneers stole another five points from the Barons, making the score 15-3 going into the fourth quarter.

The fourth quarter began with the Pioneers racking up another three points. However, as the Barons trailed 18-3 with less than five minutes left to play, they forced a Pioneers turnover and Franciscan regained control of the game.

With 4:36 left in the fourth, senior midfielder Jonathan Lee snagged his fifth goal of the season, making the score 18-4. Franciscan won the next face-off and freshman attack Gavin Brown posted his second goal of the year with just 2:45 left to play.

Just over a minute later, junior forward Michael Araps scored another goal for the Barons, his seventh goal of the year. Unfortunately, despite the Barons’ great effort in the fourth, the final score was in the favor of the Pioneers, 18-6.

McCartney had three of the Baron’s goals and picked up 14 ground balls. Sophomore defender William Muraski caused seven turnovers, a team-high for the Barons this season.

The Barons will return to Memorial Field on Saturday, March 30, to face their first-ever Presidents’ Athletic Conference opponent, Bethany College, at 1 p.m.