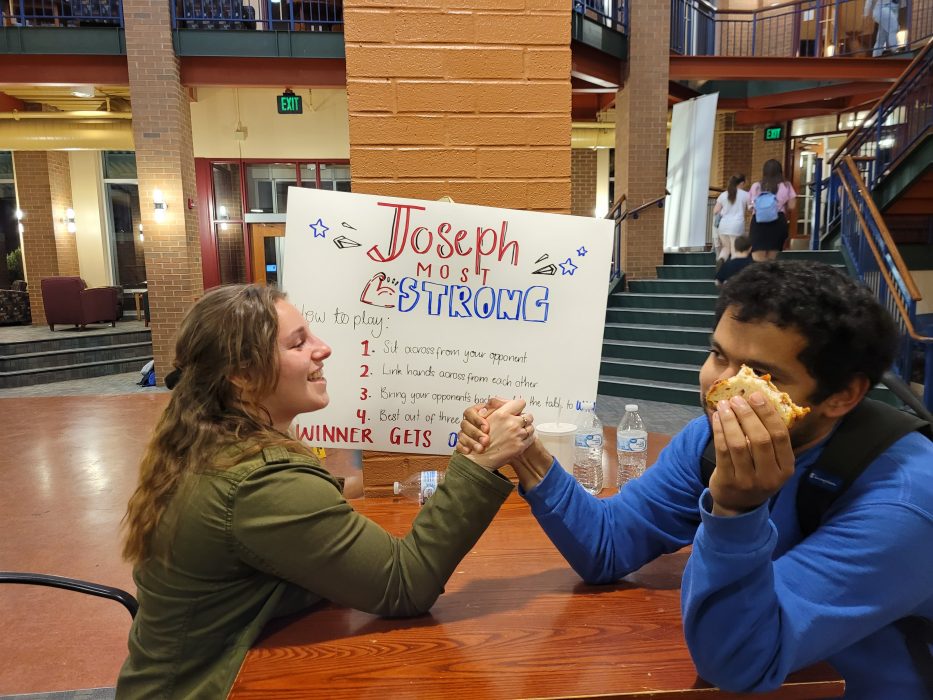 Students filtered in and out from 7-11 p.m. to play games and make crafts. Apprentices of St. Joseph (ASJ), the men’s household that hosted the event to honor their patron, handed out grilled peanut butter and jelly sandwiches and led attendees in competitions.

Games had St. Joseph themed titles, including “Light of Patriarchs,” a blindfolded obstacle course through cones; “Terror of Demons,” a cup pyramid game; “Joseph Most Strong,” which was arm wrestling competitions; and “Model of Workmen and Artisans,” where people made constructions from popsicle sticks.

In the Gentile Gallery, participants played battleship, a game where five players stood on either side of a curtain partition and threw balls over, attempting to hit opponents.

With each game, contestants won different numbers of tickets. Tickets were traded for small toys, and 50 tickets could be traded to go on a date with any ASJ intent or member.

Students crowded the Gallery around 9 p.m. and cheered loudly as ASJ members linked arms on the stage to sing. The first song they sang was “Threat Girl,” written by sophomore Joey Greve, who led with vocals and guitar. ASJ then sang its household song, “Hail Joseph” by Aaron Richards.

One attendee, junior Lucy Lateweic, said “Threat Girl” was the best song she ever heard.

“It should be the campus theme song,” she said.

While the feast of St. Joseph happened during spring break on March 19, ASJ said they wanted to celebrate their patron saint with the university when students returned.

Freshman Noah Ryan, a member of ASJ, said, “We wanted to do a big thing just to get everyone together and get them excited about the saint.”

With support from Student Government, the event was free for all because “it’s just about community,” Ryan said.

Sophomore Michael Ferraro, one of the ASJ coordinators, said that, as the household has grown over the past year, they have felt called to foster community growth.

“We are one, holy, Catholic, apostolic church — let’s live like that,” he said. “Let’s just build community and just be together. … We’re made for community.”

Ferraro said the turnout was unexpected.

“The response was incredible,” he said. “There was just life the whole time; people were really enjoying themselves … and the games. And, as a coordinator, it was just absolutely incredible to see it all come together. … The Lord has just blessed it.”

During the event, ASJ invited everyone to join them Thursdays from 9-10 p.m. in Christ the King chapel for their holy hour commitment with praise and worship.