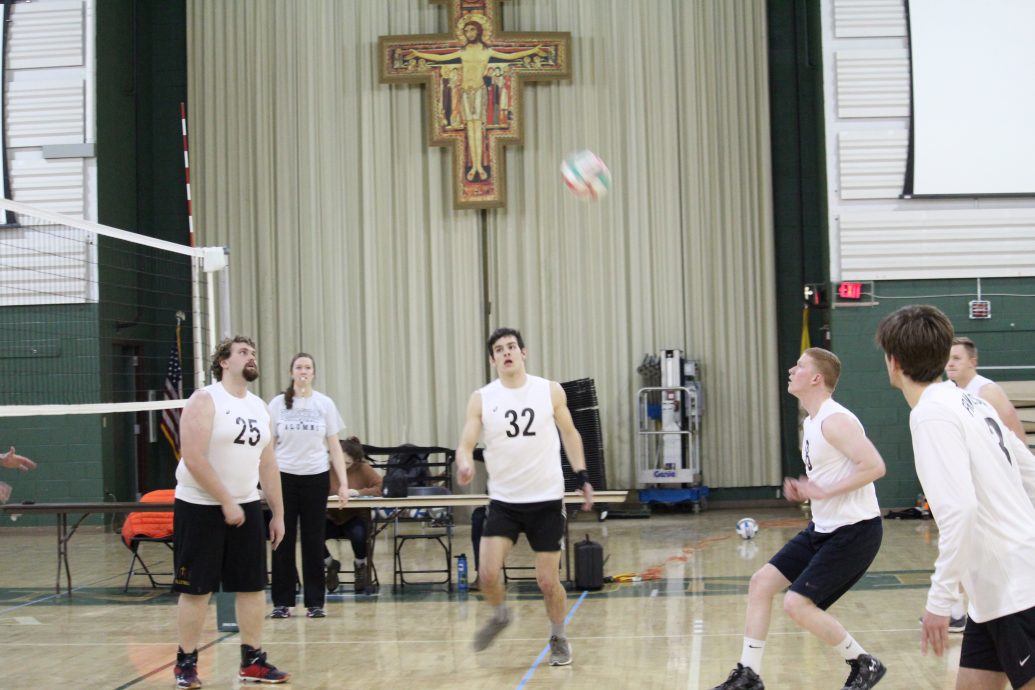 Franciscan University of Steubenville’s men’s club volleyball team played its first ever home game on Kuzma Court on Saturday, Feb. 16, at 6 p.m. against Robert Morris University, and after a match that could have gone either way, the Barons lost in the fifth set to the Colonials, ending the game 3-2.

The Barons started off the first set by quickly scoring the first point, but the Colonials soon took control and went on a scoring streak which left the Barons trailing 13-4. After a timeout, the Barons made a comeback with help especially from senior setter Michael Olenchuk and FOCUS missionary and outside hitter Sean Finan, bringing the score up to 15-11 Colonials. The two teams scored back and forth for the remainder of the set, but the Barons were not able to catch up, and they ultimately lost the set 25-16.

Though the third set began with a point for the Colonials, the Barons did not give up hope, and thanks to impressive plays by Olenchuk, Finan, freshman opposite hitter Matthew Kuefler and freshman libero Gabriel Schoone, the Barons brought the score to 13-13 and maintained the tie for the next couple plays. The Barons then went on a scoring streak, thanks especially to serves by junior setter Joe Ferrante, and half of the crowd jumped to its feet as the Barons won the set 25-18.

In the fourth set, the two teams went on alternating scoring streaks, beginning with the Colonials scoring four points right off the bat. The game intensified with some powerful serves and spikes, especially by Olenchuk, and the Barons won this set 25-17.

In the fifth set, the two evenly-matched teams went back and forth for points, remaining neck-and-neck at first. However, the Colonials gained the lead shortly before the teams switched sides of the court halfway through. The excited chants of the invested spectators were not enough to cinch the victory for the Barons, and they ended the final set 15-9, thus ending the match 3-2 Colonials.

Olenchuk, the team captain, was not disappointed by his team’s play, however. “We played well,” he said. “The nerves of this being the first ever official home game in Franciscan history (for the men’s club volleyball team) had us playing rough in the first two games. We came back with something to prove and played some of our best ball. … I am overjoyed and overcome with emotion that so many people came out to support us, and I hope we gave them a good show!”

The men’s club volleyball team will continue to practice this semester and play other club teams in the area.

2019-02-17
Previous Post: Alternate side of Homeric epic revealed in academic lecture
Next Post: Explorers of the Past club members travel internationally within Pittsburgh