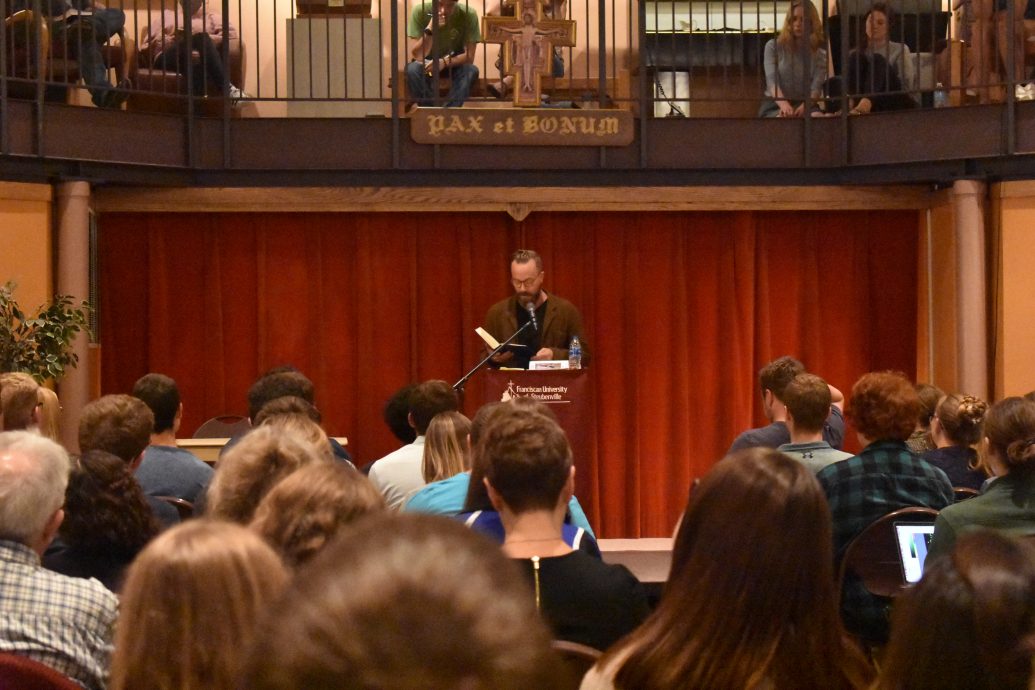 In a talk given in the Gentile Gallery Friday, a well-known Catholic speaker and author said that it is impossible to find true happiness in this life, but that there are remedies for anxieties.

While this was not his first speaking engagement at Franciscan University of Steubenville, Matt Fradd is a newcomer to the town of Steubenville. Fradd moved here in January for the community, he said, and not the sights.

“It’s better to be in love in the Bronx than divorced in Hawaii,” said Fradd, quoting advice Catholic theologian Peter Kreeft gave to him.

Students packed the Gallery with pens and paper in hand to hear Fradd’s talk. Fradd stood by the door to greet students, take pictures and sign books.

Fradd’s talk follows the debut of his new book “How to Be Happy: Saint Thomas’ Secret to a Good Life.” Fradd said he wanted to bring his message to young college students whom he thinks are inhibited by the false promises of the modern world, particularly modern technology.

“I think I tried to emphasize our use of technology,” said Fradd. “I believe our phones are the cause and relief of our anxiety.”

Fradd’s hypothesis is simple: it is impossible to find happiness in this life. Based on Thomas Aquinas’ “Summa Theologiae,” Fradd offered five remedies for anxieties: do something pleasurable, cry and groan, seek the sympathy of friends, contemplate truth, and sleep and bathe.

These coping mechanisms allow for growth in virtue, which Aquinas would say is the one way to achieve some happiness in this life, said Fradd. However, this happiness is dependent on the promises of eternal life.

Fradd said that we absolutely can and should find rest in secular edifying activities.

The talk was followed by questions, where students chose to ask about his personal opinions separate from the content of the talk.