Luke Conrad: The new kid on the block 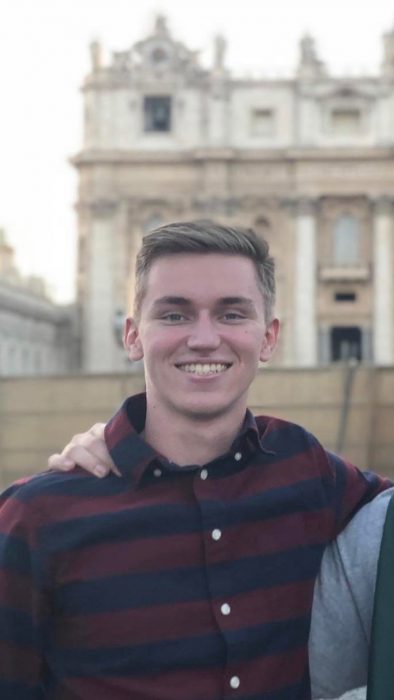 Luke Conrad, 2018 recipient of the AMCC men’s tennis Newcomer of the Year award, did not always have tennis on the brain. His favorite sports memory actually came from baseball.

“I had gone the entire season without a hit batting right handed,” said Conrad, “so for the last game of the season I decided to just hit lefty. I stepped up to the plate and hit a dribbler down the third baseline that made its way into left field for my first hit of the season.”

After growing up playing baseball in Bethlehem, Pennsylvania, Conrad switched to tennis when he was 12 years old, though not by his own choice. “When I quit baseball, my mom told me I had to play something, so she signed me up for tennis,” he said. “My mom not only got me into tennis, but she was really supportive and motivating. She also was quick to sign me up for lessons once I started getting serious.”

Now Conrad is playing tennis here at Franciscan University of Steubenville while studying computer science and communication arts with a multimedia concentration, and he is hoping to improve his tennis skills even more this season.

When asked about his goals, however, Conrad spoke of his team’s goals rather than his own. “We’re trying to win our seventh conference championship in a row, even after the loss of some really good guys,” he said. “We’d also like to go further into the NCAA tourney than we ever have before.”

Conrad describes himself as an offensive baseline player who still crowds the court. This means that he doesn’t try to volley often, but he still plays aggressively off the bounce. “I like to hit on my forehand a lot and try to put it on my opponent’s backhand. I like to play off the bounce, but I don’t sit back and wait for the ball,” he said.

Conrad credits his mom for his tennis success, along with his sister Madelyn Conrad, who also plays tennis at Franciscan. “Who wins one-on-one with Madelyn? Definitely me. She won’t admit that, but it’s definitely me.”

In addition to support from his family, Conrad said that he is also inspired by another type of athlete: “Professional bowlers inspire me because they too play a sport that no one cares about.”

Catch Conrad and the rest of the Barons tennis team in action at their first home game on Friday, Mar. 29, at 7 p.m. against Mount Aloysius College.