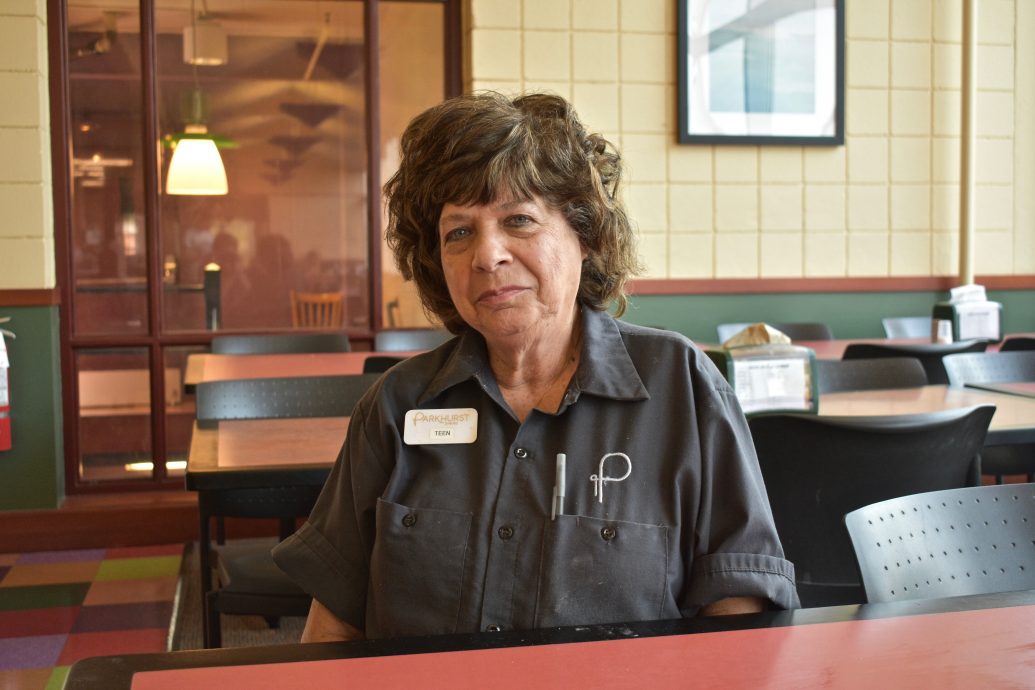 Anyone searching for a new friend or some sunny conversation to start the day should look no further than Antonian Hall, where Teen Fornsaglio makes all who enter feel welcome.

Fornsaglio works in the dining hall on Mondays and Tuesdays from breakfast through lunch, and she looks forward to talking to each and every student who comes in to eat.

Whether she is wiping down tables, refilling the cereal canisters or serving food in the Spoon and Fork, Fornsaglio will strike up a conversation with anyone and take the time to personally get to know each new face individually.

Over the past four years that she has worked in the dining hall, Fornsaglio has met multiple students with whom she has built friendships, which have even sometimes lasted past graduation.

The students are what she says make her job so special. “I love them,” said Fornsaglio. “They all get to know me by Teen. If they need something, they know who to go to. I get to know them better than just ‘good morning.’ They tell me their names and where they’re from. We get to be friends.”

Fornsaglio especially enjoys her role of making freshmen feel welcome and comfortable. She will talk to them about home and loves to listen to what they have to say about the families that they miss.

In fact, Fornsaglio says one of her happiest achievements in life is being able to greet and serve the students of Franciscan University of Steubenville. It is a sad time for her when the upperclassmen move off of campus or graduate, but it makes her day when they come back to check up on her.

Fornsaglio welcomes correspondence from any of her Franciscan friends, telling them to just send it to the mail room and it will make its way to her. “When they graduate,” Fornsaglio said, “some of them still keep in touch with me. When they get married, they send me a picture.”

Although she has been at Franciscan for over three decades, Fornsaglio only recently started work in the dining hall. For over 28 years she worked in the administration offices for the various dining services that have come and gone in Antonian Hall.

Despite her long years of service here, she finds herself unable to leave. “I just can’t leave because I love the students,” she said. “They are the heart of this campus.”

Fornsaglio is a lifelong native of Steubenville, where she grew up, raised her daughter and watched her granddaughter grow up and leave the nest for college. She takes great pride in her granddaughter, who is a second-year college student studying genetic counseling and who made the dean’s list her first year.

Fornsaglio doesn’t ask for much more in life than to be able to make the Franciscan students at home in the cafeteria. However, she does have a dream of learning to play the guitar someday. She enjoys listening to guitar music and wishes she could play it herself. She fondly remembers one student who used to bring in his guitar and talk with her about it.

In her spare time, Fornsaglio enjoys going for walks, shopping at the Robinson Mall in Pittsburgh and traveling with her husband. Every year, she and her husband pick a new place to go to on vacation, whether in the states or out of the country.

Just this past year, Fornsaglio traveled the coast of California from San Francisco to Los Angeles, which she says was a wonderful experience. To date, her favorite trip was to Italy.

Fornsaglio also enjoys watching football, proudly holding her ground as a long-suffering Browns fan. “They have let me down for many a year,” she said, “but I’m still a fan. I’ve been one for years.” Another recreational activity Fornsaglio enjoys is playing Chickenfoot, a variation of dominos, with her friends.

Fornsaglio’s cheery face and friendly conversation are sure to make the day for any student stopping in at Antonian. Students should be sure to come in on Mondays or Tuesdays and fill their sails for the day with her encouraging words. As she says, “I am here to serve my students!”

2019-09-16
Previous Post: Austria Column: Travel will not change your life
Next Post: There and back again: A friar’s tale