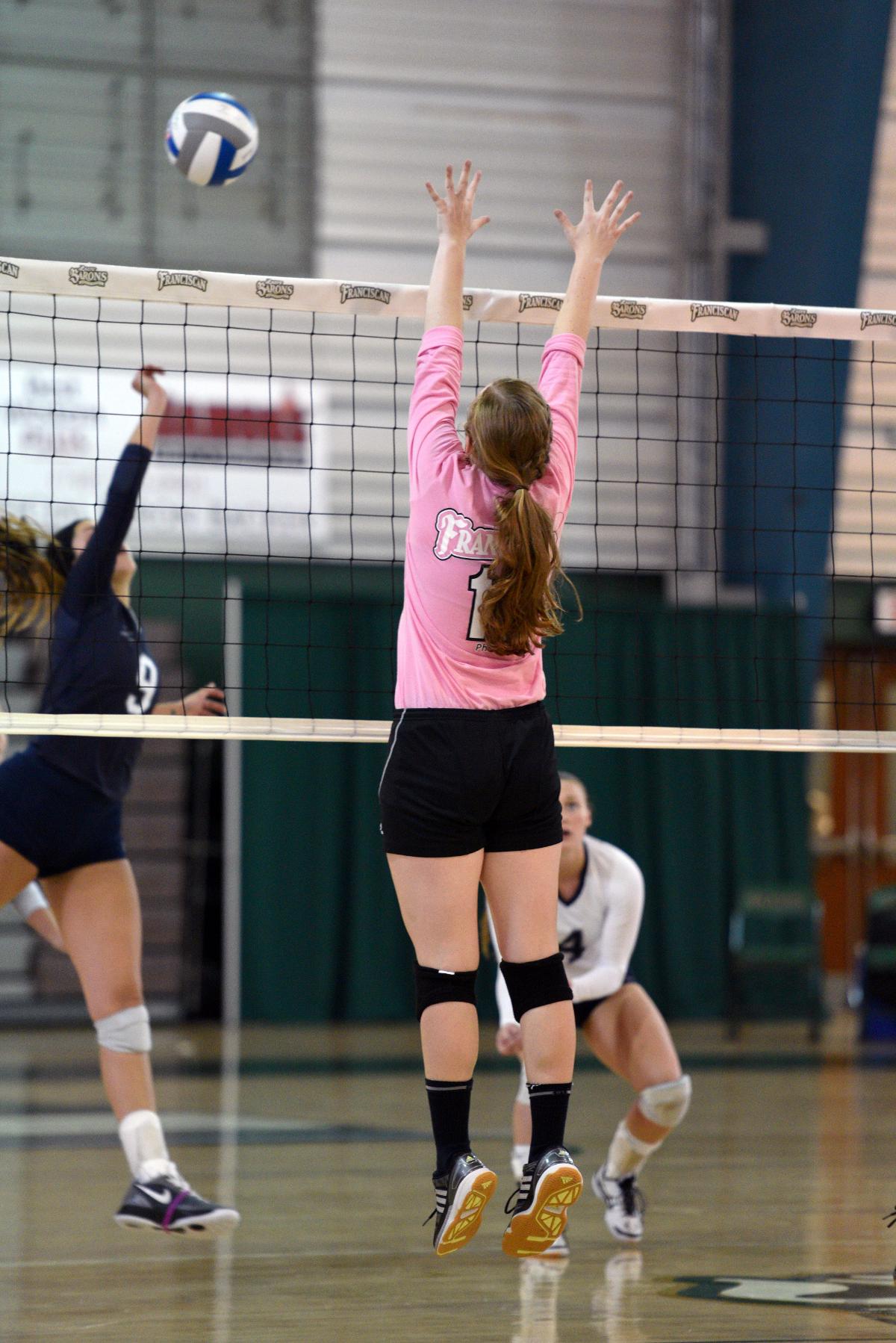 The Lady Barons won their second match of the season against Marietta College in their annual Dig Pink game on Saturday, September 10.

The first set of the match started off slow, with Marietta taking a 7-2 lead early. After a short timeout, the Lady Barons came back to the court with fire in their eyes. “They were acting tired,” Head Coach Kelly Herrmann said, in reference to the fact that the team had played another match the night before. “I told them that the other team played two matches last night, and that woke them up a little.”

Despite the slow start, the Lady Barons came back and won the first set by a close score of 25-23. With new determination, the team dominated in the next two sets, winning each 25-18 with a heavy lead both times.

After the first set, the Lady Barons’ hitting percentage shot up, thanks in part to sophomore outside hitter Maria Ciola, who ended the match with an impressive overall .247 percentage. Ciola led the team in kills, with 10 kills throughout the game. According to Herrmann, it is very important to have a strong outside hitter, and Maria’s “strength as an outside hitter has been really impressive.” Sophomore setter and right hitter Becca Haven was also a great asset in the day’s victory, with 28 assists throughout the three sets.

“Overall, we played a solid game. We dug ourselves in a hole at the beginning, but we came back and won the game,” commented Herrmann.

But this victory was not only for Franciscan University’s volleyball players. The game was part of the Dig Pink event, meaning that all of the money raised on Saturday was donated to organizations dedicated to finding a cure for and treating cancer. 75% of the proceeds from the day were donated to Dig Pink through the Side-Out Foundation, and the other 25% were donated to the local TEAR Fund.

According to Herrmann, Dig Pink is so important because everyone knows someone whose life has been touched by cancer. She went on to say that “when you’ve been close to someone who had cancer and you have the chance to do something, this is a good opportunity to think outside of yourself.”

Herrmann said that in raising money for people who have suffered through cancer, this event is a great opportunity to remind everyone, fans and players alike, of how much there really is to be thankful for.

The game ended with a touching presentation in which people who had fought or were fighting cancer were asked to stand up and receive a rose from one of the Franciscan players.

The next few weeks hold tough matches for the Lady Barons. Herrmann, intent on making improvements where they need to be made, is determined to better prepare her athletes for conference play.

The Lady Barons’ next match is this Monday, Sept. 12, at 7 p.m. at Baldwin Wallace University.