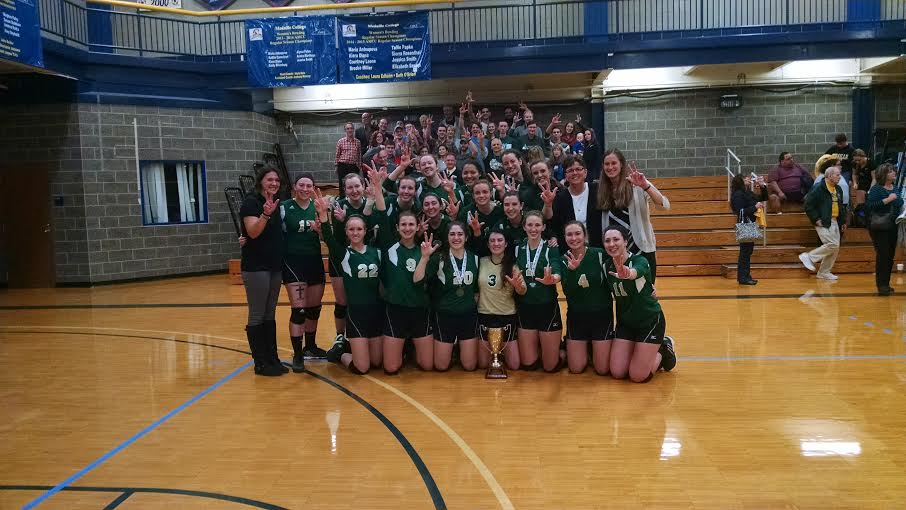 Medaille earned the no. 1 seed and hosting privileges in the tournament by finishing 7-2 in the conference, including a four-set win over the Lady Barons in early October. The Lady Mavericks advanced to the finals with a four-set win over no. 5 La Roche College in the semifinals while the Lady Barons had to beat Mount Aloysius College in the first round and Penn St.- Altoona in the semifinals in order to compete for the Franciscan’s second championship.

“Our motto was foot on the gas,” said Head Coach Kelly Herrmann. “We had a rough couple of weeks there in the middle of October. We came here and lost a very tough match. I keep telling the girls to learn from everything that happens as you go through the season. It’s not a sprint; it’s a marathon. You have to be ready to go when you get close to the finish line, and our last four matches have been indicative of that.”

Being the defending champions, the Lady Barons knew exactly what they needed to do in order to come out on top of the conference once again, namely, playing like a team with a lot of confidence.

“It was just a total team effort,” said Herrmann. “Our girls just played with such confidence, fearlessness and joy. I’m really proud that our women are those kind of women, and you see it in everything they do. It really does inspire you on the volleyball court to play well. They played really, really well together.”

Senior outside hitter Christina Lawrence again had a strong performance early with five of her 11 kills in the first set, setting the pace for the Lady Barons right from the start. Fellow senior outside hitter Dani Link also contributed 11 kills of her own. Both Lawrence and Link were named to the All-Tournament Team following the match.

“Experience teaches you so much,” said Herrmann about the seniors’ leadership. “You saw that on the court today because we have three very seasoned seniors. I just wanted this so badly for them and they deserve it.”

Overall, the Lady Barons finished with a .300 hitting percentage in the match, a season high. However, no matter how well Franciscan played on its side of the net, Herrmann knew that Medaille was still going to present a challenge, particularly with middle hitter Susan Muldoon and setter Simmone Talford.

“I really thought we did play well but that doesn’t mean you’re going to win,” said Herrmann. “It depends on how the other team plays, too. We knew that if we were really aggressive, that would help us limit their offense, particularly their ability to involve Muldoon in their offense. We were able to do that a little bit and it worked in our favor.”

Junior middle hitters Ellie Waldsmith and Emily Baznik were able to shut down Muldoon, taking out Medaille’s most potent hitter and giving the Lady Barons’ defense a boost as well.

“They have some really strong middle attack, and I thought our block was a huge key to the match and our defense,” said Herrmann. “Middles don’t often get a lot of credit but without their performance today, it would have been a different story for sure.”

Herrmann also credits her setters junior Mary Moore and freshman Becca Haven with exceptional performances, as the team could not have hit .300 without them. Haven particularly bounced back well after a shaky semifinal game and finished with 16 assists while Moore added 18.

“Our setters, Mary and Becca, I cannot say enough about their play, just so strong,” said Herrmann. “For Becca to bounce back after a match where she was a little up and down yesterday, I am very proud of her as a freshman. She grew up a lot this season.”

Another freshman was able to make a strong impact despite not playing at all against Altoona in the semifinals. Defensive specialist Callahan Hickey came in during a close second set and was able to tally nine digs by the end of the match.

With a second conference championship in their pockets, the Lady Barons’ season is not over yet as the team received the AMCC’s automatic bid to the NCAA Division III volleyball tournament. It will be the team’s second appearance at the national level after losing to Juniata College in straight sets in last year’s tournament. Having that experience, Herrmann is confident in her team’s ability to prepare for the stronger competition they will face.

The Lady Barons will play in the first round of the NCAA tournament with the opponent, date and time all to be determined.