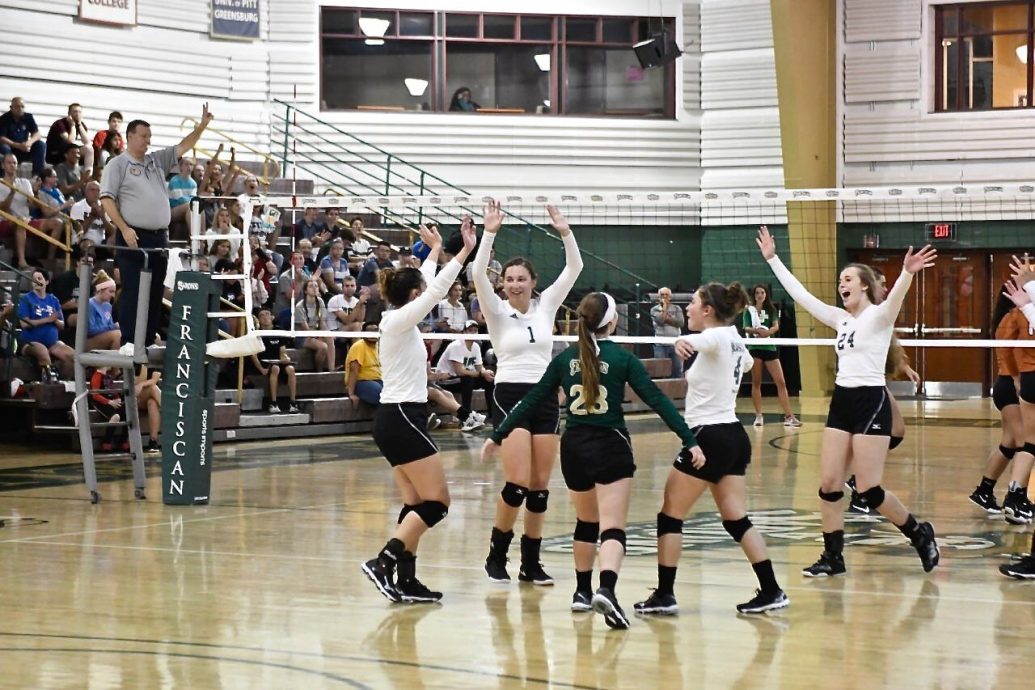 The Lady Barons volleyball team emerged victorious on Sept. 5 after an intense 3-1 match against Waynesburg University on the Barons’ home court.

The teams fought neck and neck for the first three sets until the Franciscan University of Steubenville team secured its victory with a strong win in the final set. Gripping and tense, the four sets were hard-fought and mostly decided by point differences of four or less.

“Our team battled really hard,” said head coach Kelly Hermann after the game. “They never struggle for lack of effort, but we really got to work to be more consistent and stay focused through the match. We talked about it before the match, we talked about it during the match, and it’s just something that we have to work on.”

The second set saw a long starting volley. Freshman right side hitter Malorie Hussey performed the set’s first kill, set up by Riley. The set also saw a few powerful kills by Bayer and Antonelli, set up by sophomore middle hitter Caite O’Malley. O’Malley followed those up with her own service ace, bringing the Lady Barons into a lead. Finally, a critical block by Hussey and sophomore setter Emily Nutter allowed the Lady Barons to spring forward into a 26-23 victory.

Riley’s immediate service ace began the third set with a bang. Despite the Lady Barons’ net guard, Waynesburg was able to pull ahead early on. A couple decisive kills by Antonelli tied the game 15-15 near the turn of the set. However, it would not be enough to ensure a win, and Waynesburg took the third set with a marginal lead, 25-21.

Hoping for one more victory, the Lady Barons guaranteed a solid lead through kill after kill in the fourth set. The set ended with a service ace by Riley, wrapping up with a score of 25-15 and ending the game 3-1 for Franciscan.

Commenting on the Lady Barons’ performance, coach Hermann said, “We’ll be (in the Fieldhouse) at 6 a.m. tomorrow, and we’ll spend a lot of time working on serve receives. So, I’m glad we won, but we definitely have things to work on.”

The Lady Barons’ next home game will be their Dig Pink event on Sept. 14 at 5 p.m. against La Roche University.