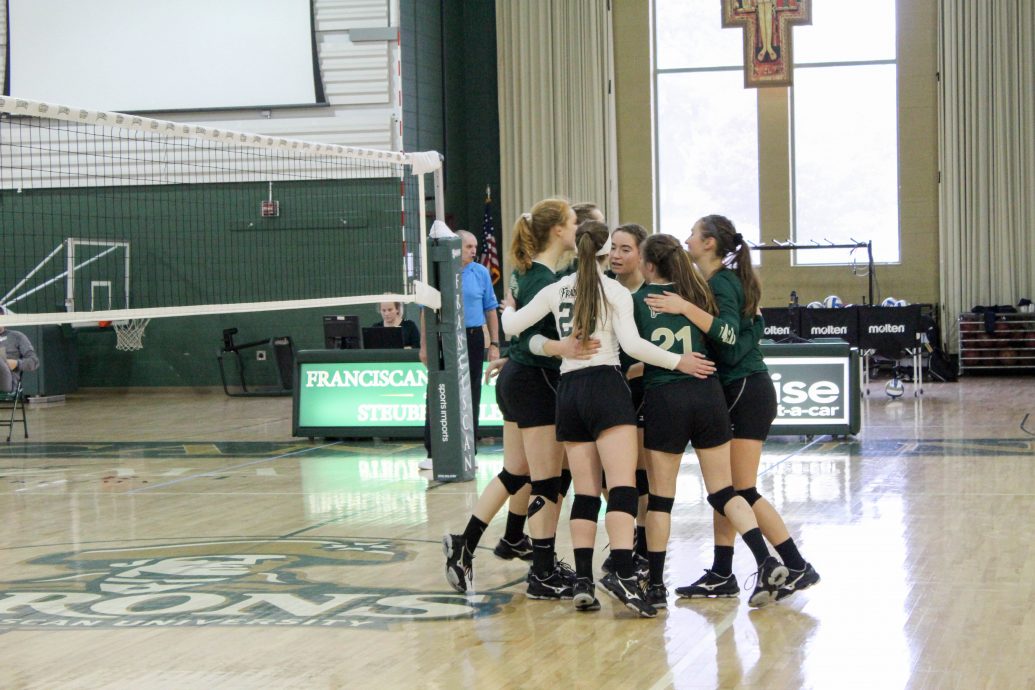 After fighting hard to win their first set, the Lady Barons handily won the second and third, defeating Hilbert in honor of their senior teammates.

Play proceeded very quickly during the first set as the Lady Barons fought to establish control of the court. For the majority of the game, Hilbert remained neck-and-neck with Franciscan, trailing by only a few points.

The Lady Barons continued to fight, however, and with skillful plays, including an impressive block and kill by senior outside hitter Maria Ciola, they took the first game with a comfortable lead of 25-19.

The second game began as quickly as the first, although Hilbert had much more trouble dealing with the Lady Barons’ offense this time around. There were several times during the game when a spike from Franciscan bounced off one of the Hawks and out of bounds, much to the Hawks’ dismay. Between that and several reception errors, the Hawks were unable to overcome the Lady Barons, who took a massive lead early on in the game and won 25-14.

The third game was no less exciting, and the Lady Barons put on a show, beginning with a massive block at the net by Ciola and freshman Caitlin O’Malley, which shot the ball straight down to the floor.

Later, freshman setter Emily Nutter set the ball just over the top of the net, giving freshman middle hitter Maria Bosco a clean attack opportunity, which she took, ending the play with a dramatic kill and adding another point to Franciscan’s lead.

Towards the end of the game, senior setter and right-side hitter Theresa Moore ran all the way across the court and out of bounds to return a spike that had been hit deep, to the excitement of the crowd.

The cheering echoed off the walls and through the fieldhouse as Franciscan took the third game 25-18 and the match 3-0.

After the match, head coach Kelly Herrmann spoke in an appreciation ceremony. “Today’s match was emotional for everyone, especially the seniors, Maria Ciola and Theresa Moore,” she said. She praised the two seniors for their hard work and dedication before speaking highly of the team as a whole.

“In spite of the challenges that we faced,” she said, “our young team would never get discouraged, never give up and always make our Franciscan family proud!”

This match concludes the Lady Barons’ season. They will be back in action in the fall of 2019.