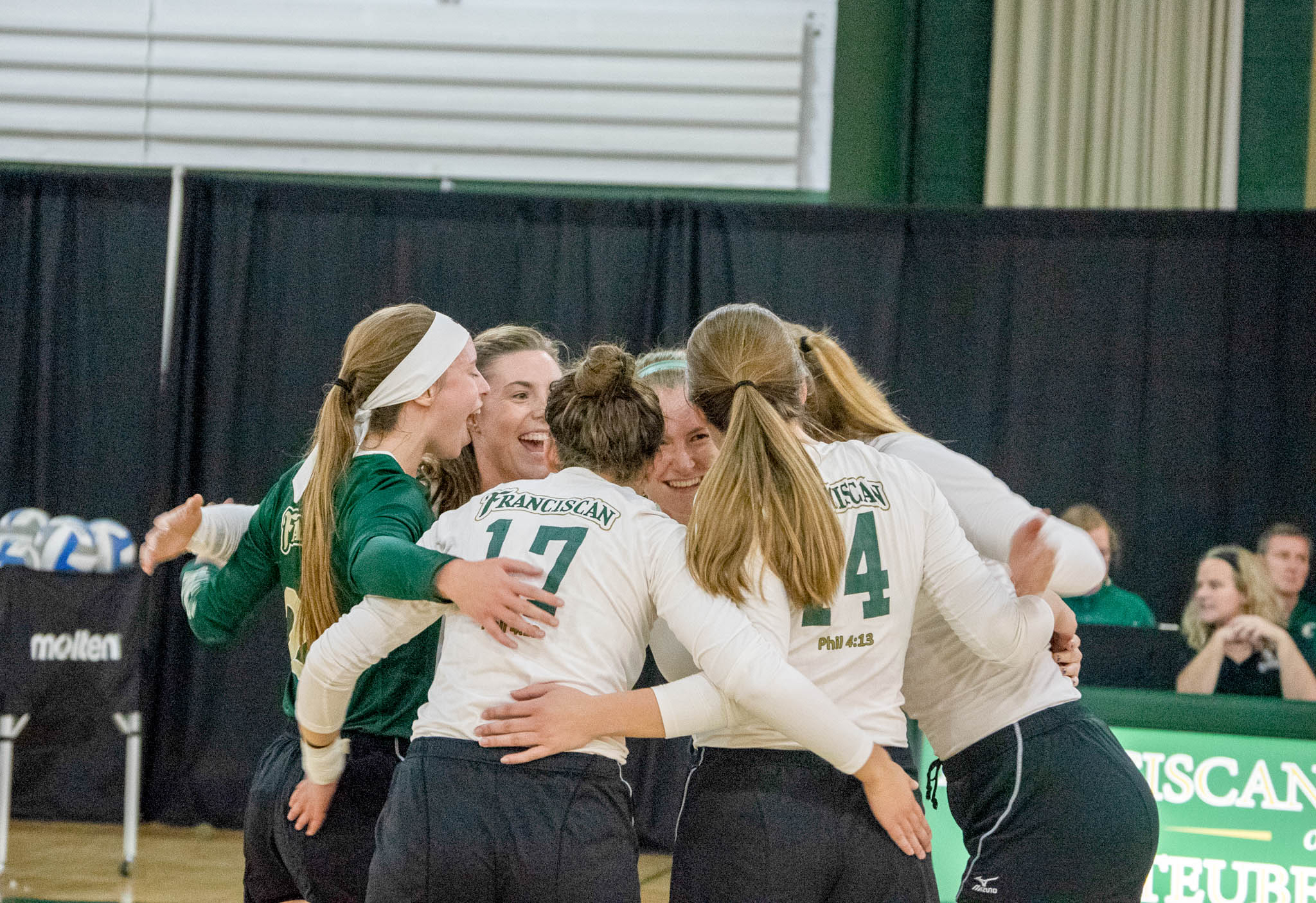 The Lady Barons volleyball team broke their eight-game losing streak last Wednesday as they defeated Pitt-Greensburg in a close four-set match, with a final score of 3-1. The match began at 7 p.m., and following a prayer from Sr. Maria Clare, TOR, the ladies rushed eagerly onto the court.

The match began with the Pitt-Greensburg Bobcats taking the first serve, and the two teams playing aggressively from the very beginning. The Lady Barons gained an initial lead of 7-3, but the Bobcats continued to resist. Regardless, Franciscan quickly padded its lead to 16-11, thanks in part to an impressive block made by freshman middle hitter Emma Birong and senior outside hitter Maria Ciola.

The Lady Barons further solidified their lead, and they took the first set 25-15, thanks to a final kill by freshman middle hitter Maria Bosco.

The second set unfolded more slowly, and the score remained very close until junior defensive specialist and libero Sarah Murgia connected on a spike to give the Barons a score of 8-6.

After several minutes of back-and-forth play, Franciscan called a time out, and then another a few moments later. The score was 20-15 Barons when the Bobcats called their own timeout. The excitement in the room picked up as play resumed, and the set ended a few minutes later when Pitt-Greensburg hit the ball into the net, ending the game 25-17 Barons.

The Bobcats rallied for the third set and maintained a tie for much of the early game, despite several net-serves from both teams. Eventually Pitt-Greensburg took a lead and, despite the Lady Barons’ best efforts, was able to hold it for the rest of the set, resulting in a score of 25-19 Bobcats.

Franciscan began the fourth set strong, taking a big lead early on. The rest of the set proceeded with much action, including the loss of one of the Lady Baron’s shoes after a low slide and a ball that bounced off the ceiling and back into the court. After an eventful set and a tag-team defense by Bosco and freshman setter Emily Nutter, the Lady Barons took the fourth and final set 25-21, giving them a match score of 3-1.

Head Coach Kelly Herrmann was pleased by the girls’ resilience. “I was proud of the way the girls never collapse or give up,” she said. “Our girls are really good at that. They don’t get sorry for themselves; they don’t get their feelings hurt.”

The Lady Barons’ next home game will be on Oct. 6 at 2 p.m. during homecoming weekend. The team will play against Franciscan University alumni.