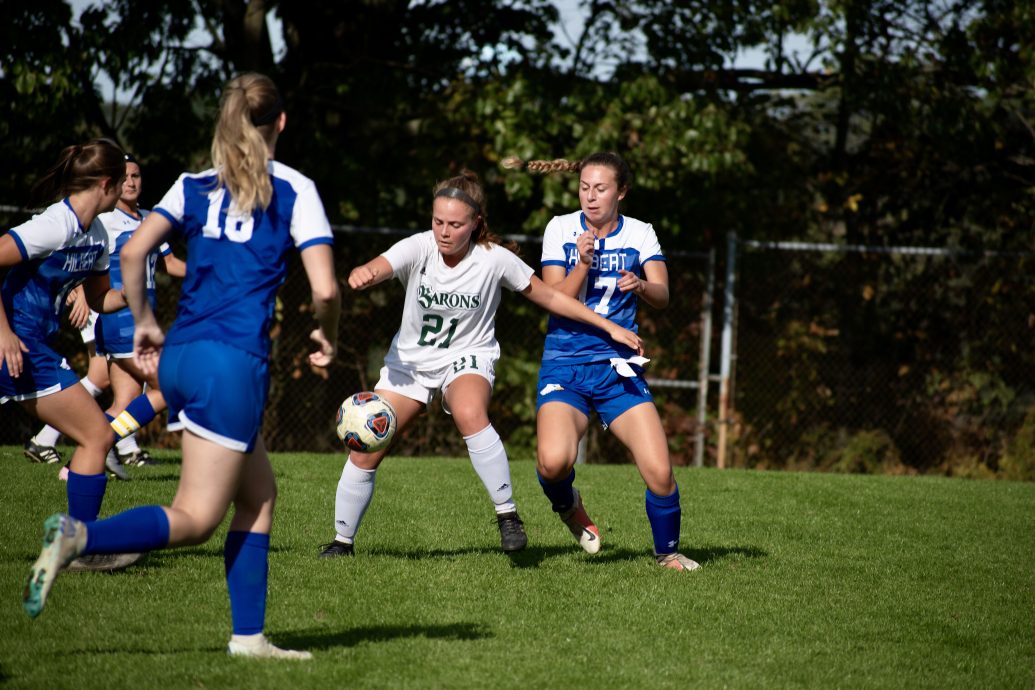 The Franciscan University of Steubenville women’s soccer team put up eight goals in an 8-0 shutout against the Hilbert College Hawks Saturday afternoon.

The Lady Barons took the field on Saturday after a disappointing showing against the number one team in the conference the previous Tuesday. Looking to get back on track coming off a loss, concentration seemed to be at an all-time high.

The home team seemed to be locked in as they began the game and scored just six minutes into the match. Senior defender Emma Cross scored her third goal of the season off an assist from sophomore forward Claire Dawyot. Just seven minutes later, senior defender Glorianne Trippe scored her first goal of her Franciscan soccer career.

Trippe’s shot that resulted in a goal was the eighth shot in 10 minutes. The Lady Barons would have 47 total shots with 25 on net, compared to the Hawks’ one shot on goal.

The first half ended with another goal by Cross, off an assist from junior defender Olivia Deel, bringing the game to a comfortable 3-0 lead.

The second half started with a goal from senior midfielder Kelsey Scott-Avery assisted by senior attack Sarah Cocozza. Cocozza continued to contribute as she put one in unassisted to push the lead to 5-0.

Freshman midfielder Ellie Scanlon scored her first career goal to make the score 6-0, and Cross put in her third of the game to add to the lead.

To round out the scoring, junior midfielder Annie Beckman scored with just eight minutes left to play. The buzzer sounded, and the Lady Barons walked off the field with newfound confidence as the scoreboard read 8-0 in favor of the home team.

“(The) girls played up to their potential,” said Bobak, “and it very much showed. It was good preparation for our competition this coming weekend, and we are ready to turn our focus onto that.”

The Lady Barons will take on the D’youville College Spartans Saturday, Oct. 26 at 3:15 p.m. This will be senior day for both Baron soccer teams, so students are encouraged to come out and support the teams!