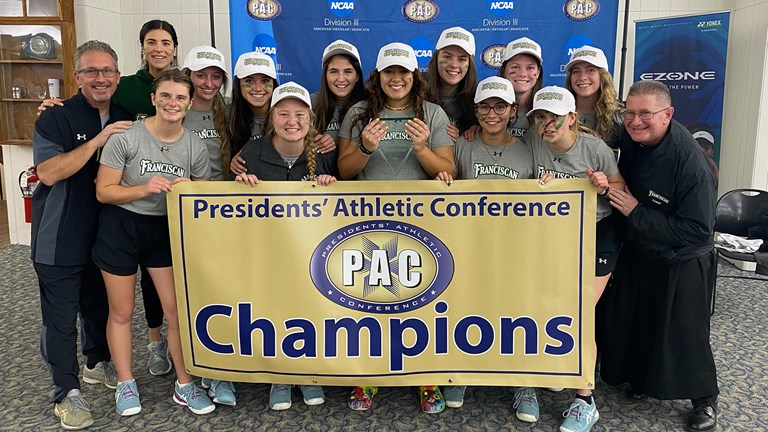 After three postponed attempts to wrap up the season’s President’s Athletic Conference, the Lady Barons tennis team finally emerged victorious from the championship in Greensburg, Pennsylvania, claiming a 5-0 win against Washington and Jefferson College.

This is the sixth consecutive year that the team has won a conference championship, with four wins coming in the Allegheny Mountain Collegiate Conference from 2016-2019.

Despite repeated postponements, which resulted in the final championship taking place 13 days later than originally planned, the Lady Barons maintained the same positive energy and enthusiasm to the end that they have developed throughout the season, said Scott Greve, women’s tennis coach and athletic director at Franciscan.

Greve said after the announcement came that postponed the finals Oct. 27, for the third time, he asked the team what they wanted to do instead. Their response surprised him.

Greve said that was one of his favorite moments of the season.

Greve, as coach, knew what his team was going through but he said the players were almost more focused than he was.

“My response to that question was not ‘Let’s go practice,’” he said. “But that’s what we did; we immediately went out to the courts and practiced for two hours.”

Greve said what has helped the team on the tennis court this season is the strong mental and spiritual preparation as a team.

“When it comes to prayer, they are just a juggernaut of a force,” he said. “They spend as much time in prayer as they do on the court preparing. And I think that shows in the way that they are able to be so focused in, not just wins and losses, but their focus on the purpose that God is calling them to.”

After almost every match this season, Greve has had coaches approach him and congratulate him on what a great group of ladies are on the tennis team.

“It’s because of the preparation that they do ahead of time in prayer,” Greve said. “They really seek God’s guidance and what he’s calling them to in every moment. … When they step out onto a court, the reaction that they get from their opponents is probably the thing that I’m most proud of.

“When we walk out on the court, are we looking to win every match? Absolutely. That’s what we’re geared to do. But at the same time, there’s just as much emphasis put on the way that we communicate God’s love to our opponents and how we communicate that love to them.”

The Lady Barons, undefeated in Conference, have also taken on higher level Division II teams this season. Although they ended in losses for the Lady Barons, they were able to score several points in the matches.

Greve said the biggest highlight of the season overall for him is how the Lady Barons have handled their biggest rivals: Grove City College, Washington and Jefferson and Westminster College.

“Those are three very good teams,” Greve said. “(The Lady Barons’) preparation for matches is as good as any team that I’ve coached. When we get to practice, they focus, they do what we need to do in order to prepare for our match. And when they get into those matches, it shows. They’re ready to go and they play well. We would expect and hope that in the final we’re going to see the same thing.”

As athletic director of the university, Greve said it is a pleasure to see the well-balanced preparation that each team carries out.

“As the women’s tennis coach, it’s just really neat to see that personified in my own team, and to know that it’s not just them; it’s each of our athletic teams, and how committed they are to really serving God and each other, and serving their opponents,” Greve said. “It’s just a real blessing to be associated with these student athletes and see what they’re doing.”

The Lady Barons now have an automatic qualifying bid into the NCAA Division III Championships, which are projected to begin May 12. They will begin their spring season March 14.

2021-11-12
Previous Post: New club is par for course among Frisbee fans
Next Post: From suicide to fantasy, theatre one-acts will showcase seniors’ skills