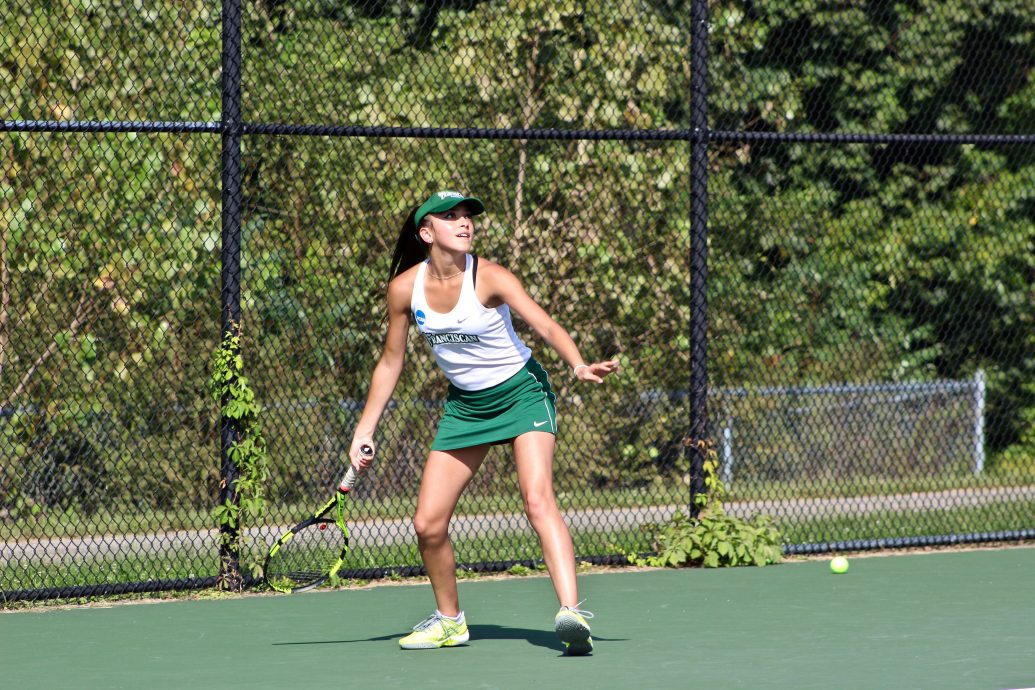 The Lady Barons took an early lead in doubles as senior Madelyn Conrad and junior Ana Victoria Haddad Garcia quickly handed Franciscan the first point of the match on the No. 1 court with a score of 8-2.

At No. 2 doubles, senior Grace Hammel and sophomore Zoey Stapleton fell just short of a win as the Raiders took the match 8-6. Similarly, freshman duo Estelle Leon and Haley Davinsizer were unable to pull out the win on the No. 3 doubles court, losing 8-5 in a close contest.

Down 2-1 going into the singles portion of the match, the Lady Barons stayed positive and competitive. The freshman shined against the Raiders, showing their strength in singles.

Freshman Caroline Picard walked off the court with a 6-1, 6-0 win against her opponent at No. 6 singles. Leon followed suit with a close and exciting 7-6, 6-4 win at No. 3 singles.

Two more tiebreaks took place throughout the course of the match as the No. 4 and No. 5 singles competitors battled for wins on their courts. After a hard-fought first set and a Raider comeback in the second, Hammel ultimately fell to her opponent in a 7-5, 6-0, 10-3 tiebreak at No. 4.

At No. 2 singles, Haddad played hard with deep groundstrokes and excellent net play. However, the consistency of her Raider opponent proved to be too much in a 6-2, 6-1 loss.

“It was another tough non-conference competition for our ladies,” said head coach Scott Greve. “They continue to battle and show their determination. This match easily could have gone our way, but we faced a great team in Mount Union who had just a little more than we did. Our freshmen continue their winning ways, which is very encouraging.”

The Lady Barons look to get an out–of-conference win against Grove City College Tuesday, Sept. 24 at 3:30 on Franciscan’s home courts.