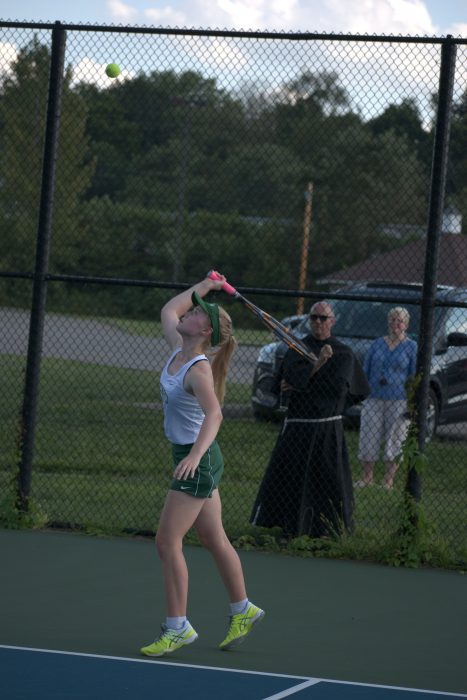 Franciscan University of Steubenville’s women’s tennis team opened its 2019 season with a 5-4 loss in a hard-fought, competitive match against the Westminster Titans on  Friday, Aug. 30.

Senior Madelyn Conrad and junior Ana Victoria Haddad Garcia began with an offensive start at No. 1 doubles. The duo set the tone of the match with aggressive net play and strong serves, but the Titans fought back with consistent strokes and smart shots, eventually taking the match 8-4.

At No. 2 doubles, senior Grace Hammel and sophomore Zoey Stapleton fell just short of a victory after their strong baseline game was not enough to keep the Titans from coming out on top, 8-6.

Freshman duo Estelle Leon and Haley Davinsizer earned their spot in the lineup, picking up the first point of the match for Franciscan. The new Lady Barons won an intense 7-2 tie-break and took the match 8-7 at No. 3 doubles.

Conrad began at No. 1 singles but, after a brief struggle, was defeated 6-0, 6-3. Playing at No. 3 singles, Hammel showed off her solid ground strokes and fast serves; however, she ultimately fell to her opponent 6-2, 6-0.

After dropping the first set at her No. 2 singles match 6-1, Haddad turned the match around with consistent groundstrokes and fantastic net play, winning the second set 6-2 and forcing a tie-break. With the other courts around her cleared and the full support of her teammates and fans, Haddad claimed the match 10-8.

Stapleton picked up the third point for the Lady Barons after a comeback at No. 4 singles, taking the second set 7-5 and eventually winning the tie-break 10-4 for the match.

After dropping the first set 6-2 at No. 5 singles, Leon refused to leave the court without a fight. She played competitively and took the second set 6-3 before falling 10-4 in a long and exciting tie-break.

Freshman Caroline Picard played an impressive and quick match at No. 6 singles. Picard’s consistent strokes gained her a 6-2, 6-1 victory and her first collegiate win.

Head coach Scott Greve said, “We still have some work to do to get into match shape, but overall, they played through injuries and provided a real grit I have not seen from them before. The freshmen were particularly impressive in their first NCAA match.”

The Lady Barons will return to the Belleview courts in Steubenville on Tuesday, Sept. 3 at 3:30 p.m. to face Baldwin Wallace.