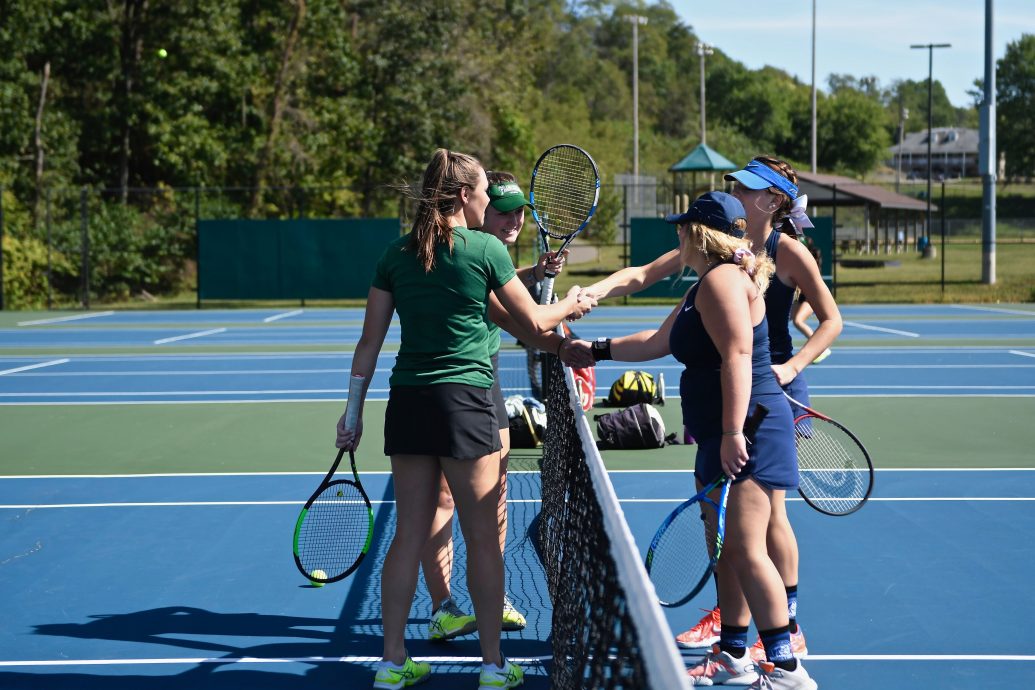 Starting senior day off strong, seniors Madelyn Conrad and Grace Hammel reunited as doubles partners for their final home match as Lady Barons. The dynamic duo shut out their Mountie opponents in a quick 8-1 set.

Second off the court was freshman duo Estelle Leon and Haley Davinsizer. The Lady Barons swept their opponents 8-0 at No. 3 doubles.

On the No. 2 doubles court, junior Ana Victoria Haddad Garcia and sophomore Zoey Stapleton played together for the first time this season. The new doubles pair earned the third point for Franciscan with an 8-3 win.

Going into the singles portion of the match, Conrad picked up a 6-3, 6-2 victory at No. 1, wrapping up her regular conference career with another undefeated season.

At No. 3 singles, Leon continued her streak of dominant conference play with a seemingly easy 6-0, 6-1 win. Similarly, Stapleton swept her Mountie opponent 6-0, 6-0 on court No. 5.

At No. 4 singles, Hammel finished out her last regular season career with a quick 6-0, 6-0 shutout against her opponent. Hammel walked off the court with yet another undefeated conference season.

In an abbreviated lineup, Davinsizer quickly wrapped up her match with a 6-2, 6-3 victory at No. 6 singles.

After an impressive first set at No. 2 singles, Haddad was unable to pull out the win. Her Mountie opponent wrapped up the match 7-5, 6-0.

Head coach Scott Greve expressed his admiration for the seniors on the team on senior day. “It was a nice end to the regular season,” he said, “and being able to see Madel and Gracie play doubles together was a wonderful treat. Their chemistry picked up right where it left off two seasons ago. They both played great singles matches as well.”

Greve also looks forward to championships in the weeks to come. “I believe we are well prepared for the Conference Championship in two weeks, and we’ll use the days ahead to work out a few things,” said Greve. “The ladies are starting to peak at just the right time.”

The Lady Barons will take the No. 1 seed in the AMCC tournament beginning Oct. 18 in Erie, Pennsylvania.