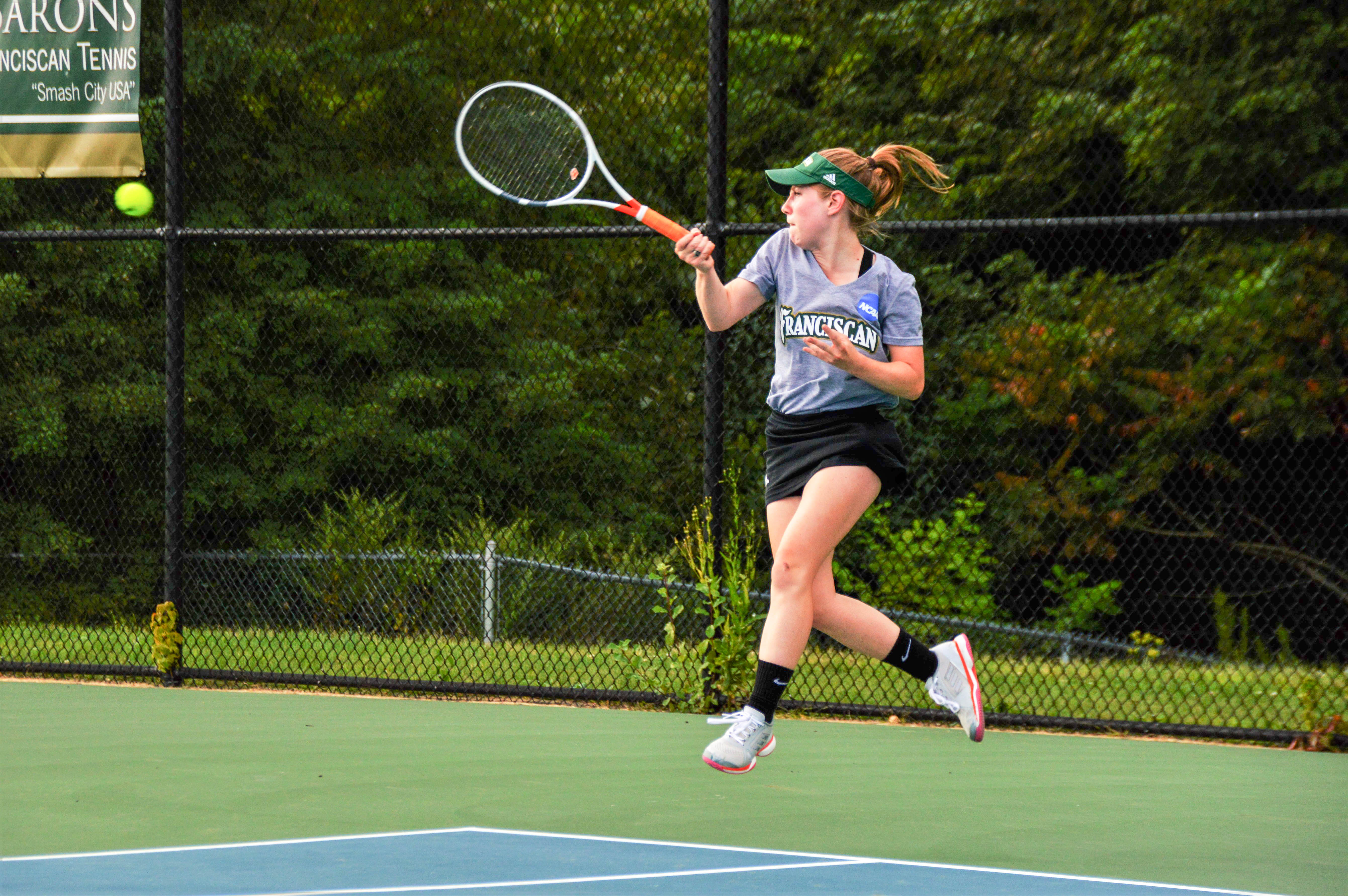 A perfect 27-0 in their last three matches played, the Franciscan University women’s tennis team put their 4-1 record on the line Tuesday against Allegheny College. Under cloudy, threatening skies, the Lady Barons began play at 4 p.m., just after team introductions and warm-ups.

It was immediately apparent that each match was to be a dogfight. Facing formidable opposition at No. 3 doubles, senior Emmy Mathias and sophomore Gracie Hammel were the first of Franciscan’s three doubles teams to go down an early 1-0. The match appeared closer to the eye than the score indicated down the stretch, given that Hammel’s punctual groundstrokes and Mathias’ decisive volleys sent a number of points their way. The duo demonstrated on-court chemistry during their 8-1 loss.

On the first court, sophomore Madelyn Conrad and junior captain Maria Binette together surprised their Allegheny No. 1 doubles counterparts from the first point. The pair moved well together on the court, in a fiery match featuring several Binette down-the-line winners. Down 4-3 and a break, lengthy rallies continued to characterize the Lady Barons’ style of play, though Allegheny pulled away for the 8-3 victory.

No. 2 doubles remained, for much of the match, a story of baseline consistency. Juniors Julia Razook and Taranee Karimpour kept the match competitive despite going down a break, often taking the net before Allegheny could capitalize on short service returns. Razook was all over the court in Franciscan’s closest doubles match of the afternoon, registering multiple passing shots before materializing at the net for the volley putaway only points later. On serve and up only 5-4, Allegheny pulled away for the 8-4 win.

After the conclusion of doubles play, an extended period because of a 14-minute rain delay, the Lady Barons appeared eager to erase a 3-0 deficit as they took the courts for the onset of singles play.

At. No. 5 singles, Mathias succeeded in gaining consistent leverage over her opponent via steady groundstrokes. She won the majority of points that saw her finish at the net, before surrendering a 6-2, 6-2 loss.

Anchoring the No. 2 singles spot, Binette traded topspin-heavy groundstrokes deep into both sets. She consistently attacked vulnerable second serves, though her opponent’s net presence and overbearing consistency proved too much in a 6-2, 6-1 loss.

Conrad pulled out all of the stops during her No. 1 singles match. Faced with formidable Allegheny opposition, she shortened groundstrokes on both sides, redirecting deep serves courtesy of an abbreviated return motion. Things got even closer after a 6-2 first set loss, when rallies lengthened to reflect each winded athlete’s respective efforts. Down 5-4 in the second set, Conrad fell just a few points short of forcing continued play, losing 6-4.

The Lady Barons have smart tennis to thank for their lone match victory on the day, courtesy of Karimpour’s No. 5 singles effort. After a 6-2 first set went Franciscan’s way, Karimpour refused to alter her style of play despite a second set deficit. The picture of consistency, she rebounded in a third set tiebreak, taking the series 10-5, for the match win.

Razook seamlessly carried over a punishing style of doubles play onto the singles court. Returning her opponent’s heavy serves with impressive consistency, the junior reached the net at regular intervals in one of the better matches she’s played since the season’s onset. Razook fell 6-3, 6-3 after an encouraging showing.

Hammel’s backhand strokes were the focus of her No. 3 singles match. Her opponent forced the ball there early and often, and Hammel responded largely with a positive showing, despite brief groundstroke inconsistencies late in each set. The sophomore played an exciting match from beginning to end, and will look to increase groundstroke consistency as the season progresses.

After falling 8-1 to difficult, non-conference Allegheny opposition, the Lady Barons must quickly regroup. They travel to Washington, D.C. for a match against The Catholic University of America. Their next home match begins at 4 p.m. on Sept. 21.