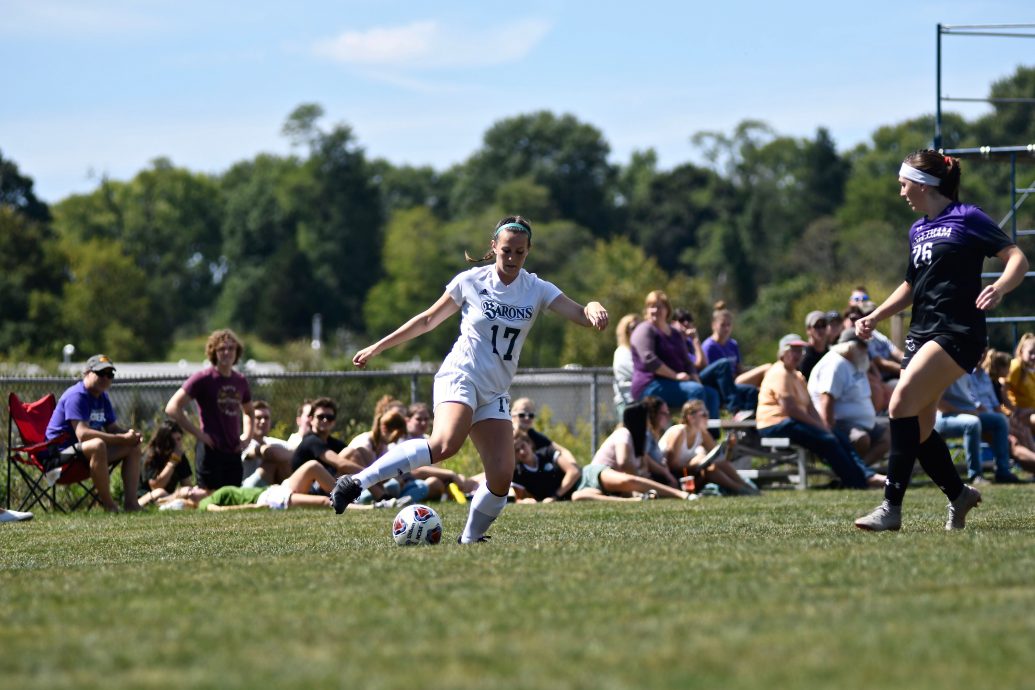 After a well–fought match, the Lady Barons soccer team triumphed over Chatham University in a 3-2 home win Saturday Sept. 14.

The first half started out slow, but the Lady Barons picked up the intensity level and fought hard for possession of the ball. Promptly following more aggressive play from the home team, freshman forward Bella Rubino landed the perfect shot on net, making the score 1-0 in the 22nd minute.

As the first half of the match continued, both teams attempted to penetrate the backline but to no avail until junior forward Kaitrin O’Leary gave the Lady Barons a 2-0 lead with an assist from sophomore defense Claire Dawyot. This lit a fire under the Lady Barons and led to them closing the half successfully with the lead intact.

The second half started with Chatham possessing the ball more convincingly and finding scoring chances. Ten minutes into the second half, Chatham scored their first goal of the game off a corner kick.

The Lady Barons responded with energy and a will to keep the lead and seal this game with a victory. Their efforts came to fruition as senior midfield Sara Cocozza scored with an assist from freshman midfielder Ellie Scanlon with 20 minutes left in the match.

Unfortunately, Chatham would not let up, and the Cougars scored just 6 minutes later. For the remainder of the game, both defenses turned up the intensity, resulting in a back-and-forth with no further scores. The Lady Barons walked away with the victory, 3-2, marking their second win of the season.

Head coach Christyn Bobak praised the team, saying, “The girls came out, knew what they needed to do, and they were hungry to execute. They came out mentally ready to own this game, and they did a great job.”

The Lady Barons anticipate their next home game, which will take place Wednesday, Sept. 18 at 3 p.m. against Waynesburg University.