Lady Barons give their all in loss against D’Youville 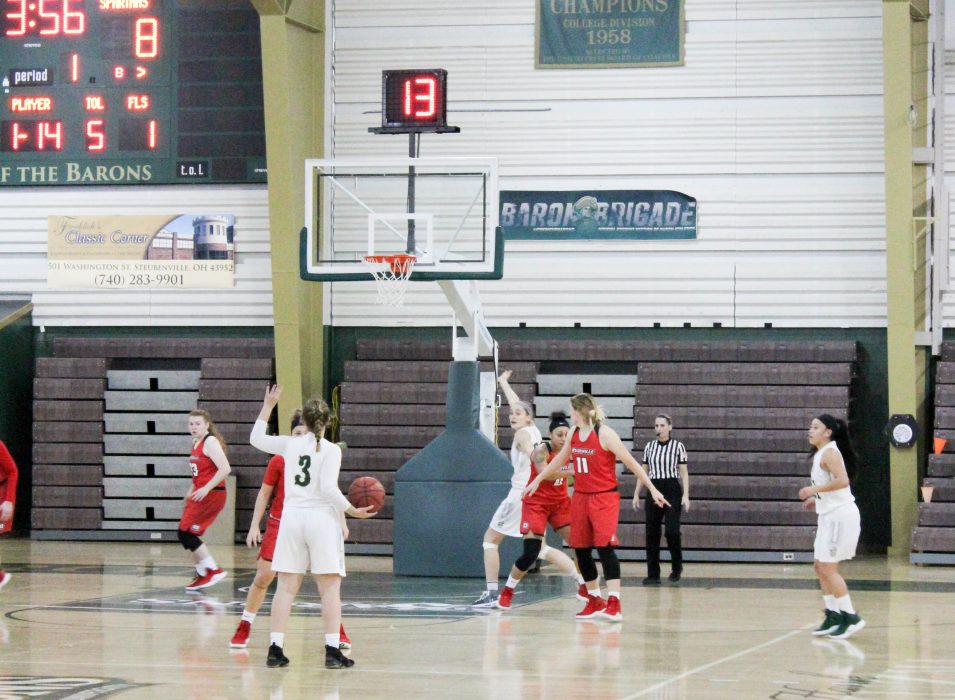 The Lady Barons basketball team showed up to Kuzma Court with a diligent sense of competition despite a 64-47 loss in its match against the D’Youville Spartans at 1 p.m. on Dec. 1.

Freshman forward Angela Starre started the Lady Barons off strong with back-to-back layups in the first two minutes of action. The next few minutes saw back and forth buckets from the two teams before junior guard Abby Baierl netted two jumpers and a free throw within 30 seconds, bringing the score to 9-6, Barons. Starre and Baierl, who scored six and nine points respectively, led their team to a lead of 13-15 in the first quarter.

However, a 3-pointer by D’Youville in the first 30 seconds of quarter two gave the Spartans a lead that would last for the rest of the game.

By the end of the first half, D’Youville had taken over the court, scoring over 20 points and holding the lead for the majority of the second quarter. The Lady Barons never let down their efforts and managed to stay less than 15 points behind D’Youville throughout the quarter, ending the top half with a score of 35-23.

The Lady Barons came out strong in the third quarter. Starre was the first to score with a 3-pointer after the first minute. Throughout the quarter, the Lady Barons matched D’Youville point for point, earning nearly the same amount of points as their rivals and ending the quarter at 53-40.

The fourth quarter showed continued Spartan scoring. The Lady Barons struggled to get going offensively, and it showed in the final blowout score. The game ended at 64-47 and D’Youville left the gym victorious.

Starre ended up with 18 points and two blocks, while junior guard Kaitlyn Sonneberger set her season high with 12 points in a refreshing showing of offense.

Head Coach Suzy Delaney had positive feedback for the team after the tough conference loss. “We again saw a lot of positives in all aspects of the game. We just have to keep working hard to make those positives a consistent part of the entire 40 minutes and that effort will translate into wins,” she said. “We are excited to get back to work on Monday to prepare for our next AMCC matchup at Mount Aloysius on Wednesday.”

As coach Delaney said, the Lady Barons look forward to their next matchup at Mount Aloysius College on Wednesday, Dec. 5, at 6 p.m.

2018-12-03
Previous Post: Barons fall to D’Youville in a devastating loss
Next Post: Letter from the Editor: Trusting God in letting go