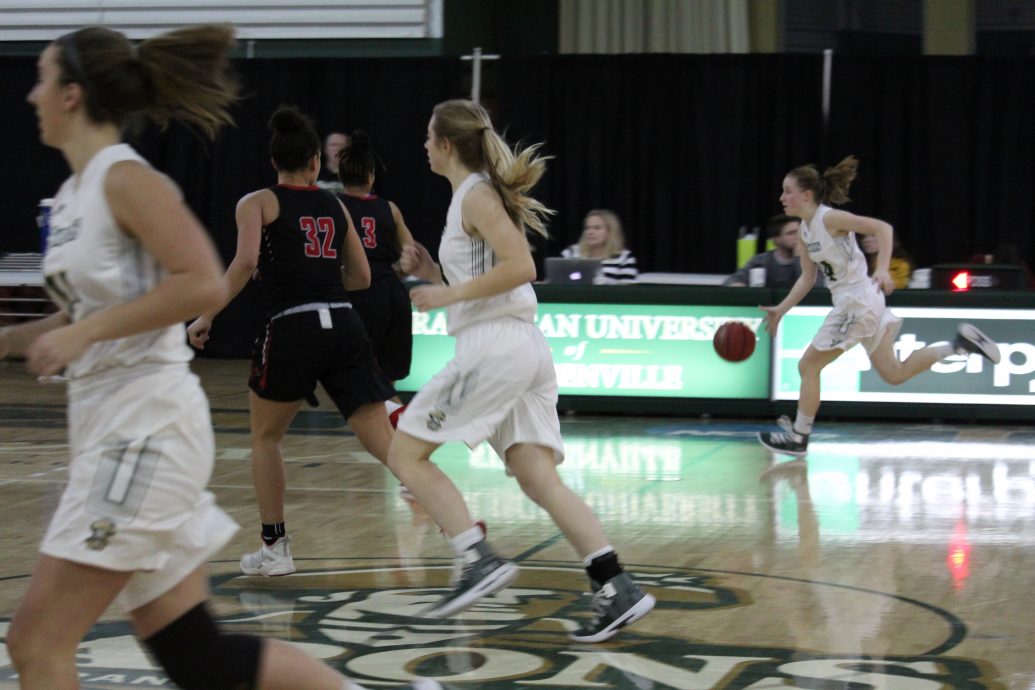 The Lady Barons basketball team fought hard but could not complete the comeback against the La Roche Redhawks in a 68-62 loss on Wednesday, Feb. 6, at 6 p.m.

After suffering a loss with a large deficit the Saturday before, the Lady Barons had something to prove in this game, and it truly showed with a strong effort from the home team, though the effort ultimately fell short of success.

The first quarter was full of lead changes as Franciscan managed to score with the Redhawks, trading buckets one after another. Freshman forward Grace Godich got the scoring started in the first with a tough finish in the paint, and junior and senior guards Abby Baierl and Raegan Stead carried the offense after that. Baierl scored in a variety of ways while Stead knocked down a pair of threes. The score after one stood at 18-15, Franciscan.

A La Roche 3-pointer tied up the game to start the second quarter, and the Redhawks started to get their offense rolling. However, more sharp shooting from Baierl sparked the Lady Barons and got other players going as well. Baierl hit two 3-pointers in this quarter. Junior guard and forward Kaitlynn Sonneberger finished a layup off of a Baierl assist, and shortly after, Baierl blocked a shot on the defensive end. Godich and Sonneberger added a few more shots of their own to contribute to what was starting to become the Baierl show before the half came to a close. The Redhawks’ scoring in this half gave them a slight lead at 37-34.

The third quarter shifted the game as both teams played a tough defense and struggled to score. The Redhawks kicked off the half with a made 3-pointer to give them a 6-point lead. Baierl answered with back-to-back layups on consecutive possessions and then another after a few minutes of no scoring from both teams. Senior guard Gaby De Jesus blew by defenders for two points and brought the deficit to three, and the quarter finished scoreless after that, giving the Redhawks a 52-49 lead.

The last quarter of the game was wild, to say the least, as the Barons gained and lost the lead throughout the course of the 10 minutes presented promptly on the clock. After a layup from freshman forward Angela Starre, Stead hit a three to tie the game and Baierl took the lead with a finesse move in the paint. The Lady Barons tried to hold onto their lead, but La Roche proved to be relentless on offense, scoring some quick buckets to regain its stranglehold on the game. The Lady Barons had some chances to come back but failed to capitalize, and the Redhawks managed to come out on top, ending the game at 68-62.

Head Coach Suzy Delaney was impressed by how her team played this game, especially after the results of the previous two games. “Our team went punch for punch with La Roche tonight, and I’m very proud of the effort,” she said. “We obviously didn’t get the job done, but we’re excited about the opportunity to honor our seniors on Saturday versus Hilbert.”

The Lady Barons will take on the Hilbert Hawks on Saturday, Feb. 9, at 2 p.m. on Kuzma Court.