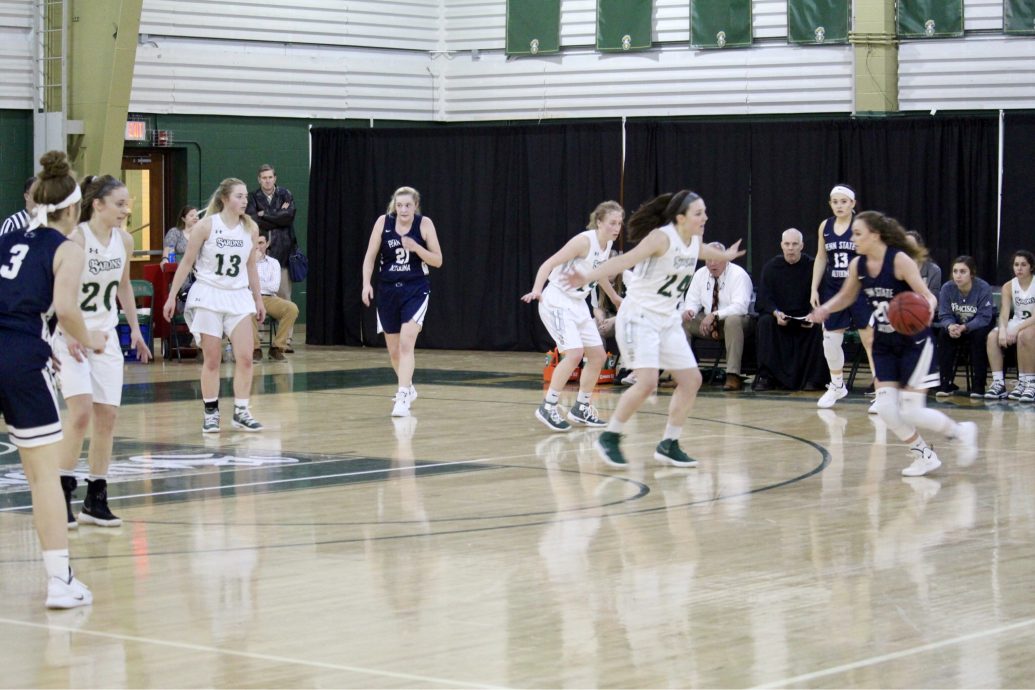 The Lady Barons opened their academic semester with a soaring victory against the Penn State-Altoona Lions at Kuzma Court on the evening of Jan. 16.

Although Penn State-Altoona netted the first 3-pointer of the night, junior guard Abby Baierl and freshman forward Angela Starre each knocked down a deep 3-pointer apiece in the next minute of play. An assist from senior guard Gaby De Jesus led junior guard Kaitlyn Sonneberger to land a jumper, putting Franciscan in the lead that led them through the rest of the match. A pair of free throws by De Jesus brought the final score in the first quarter 22-14, Barons.

With an assist from Starre, Sonneberger set the tone for the second quarter with a jumper in the paint during the first minute of play. The Lions responded with a layup in the paint, but Baierl was right behind her, scoring another layup for the Lady Barons and starting a two-minute break in scoring, which was eventually broken by more field goals on both sides of the court. Senior guard Raegan Stead put a jumper and a layup on the board for the Lady Barons, and a final jumper by junior forward Rose Judge started halftime with 34-21, Barons.

The Lady Barons broke out of the gates for quarter three with four points from Sonneberger and a 3-pointer by Starre. Meanwhile, the Lions found a stride and went on an 10-2 scoring run before the Lady Barons restored their consistent 10-point lead and ended the quarter at 51-37, Barons.

The Lions opened the final quarter with a series of free throws and fought to match the Lady Barons point-for-point, but their effort was not enough to close the gap that at one point spanned 19 points. An impressive fast break 3-pointer by the Lions brought the final score to 77-61, Barons, gaining the Lady Barons another victory in the books and their second straight.

Head Coach Suzy Delaney had high praise for her team following its second win of the season. “I’m really proud of the team and the effort they displayed tonight on both ends of the court. This win was a total team effort – each of them stepped up when we needed them,” she said. “De Jesus really came out with fire and set the tone for the rest of the game. We had a balanced attack and I think that’s a key for our continued success.”

Baierl put up a stunning double double in her stats, scoring 13 points and grabbing 10 rebounds. Starre, Stead and Sonneberger each put up double-digit scores that night, scoring 15, 11 and 10 points respectively.

The Lady Barons look forward to their next home match against Medaille College on Saturday, Jan. 26, at 2 p.m.