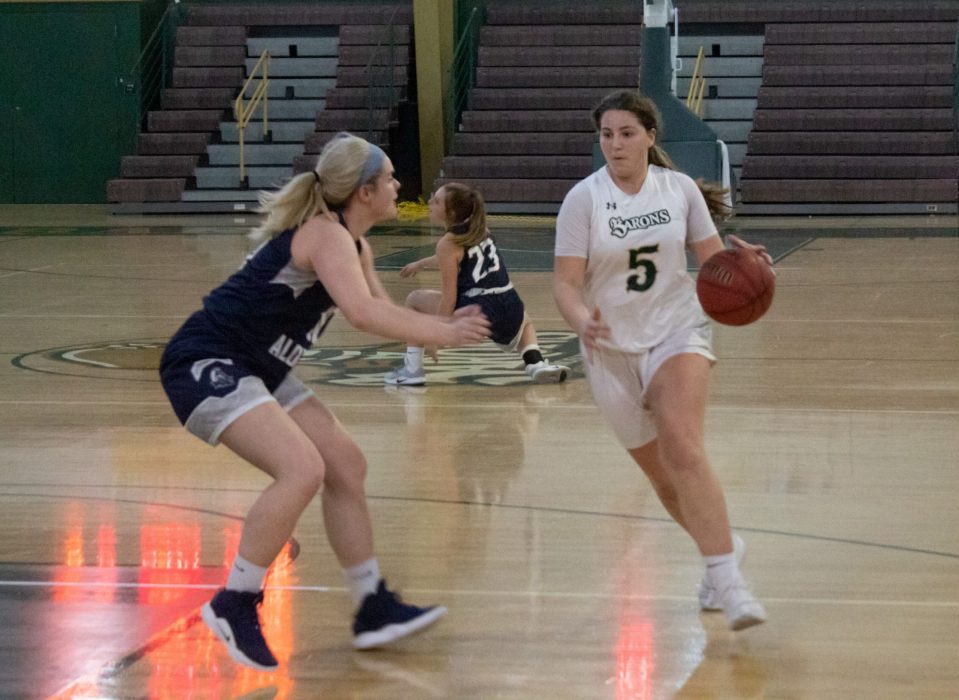 The Lady Barons won 62-50 against the Mount Aloysius Mounties Wednesday at 8 p.m., playing a defensive game that allowed them to make their fourth win in a row.

The first quarter was low scoring as both teams kept up a tight defense. It ended with the Lady Barons leading by only one point, 6-5.

The second quarter started off with a score made by senior guard Abby Baierl within the first 15 seconds. Defense remained tight as both teams struggled to get to the basket.

After repeatedly tying the score, the Mounties pulled ahead with a 3-pointer, making it 19-16 with two minutes left in the quarter. Another 3-pointer from the Mounties brought the score to 22-16 before the first half closed.

In the third quarter, both teams made several 3-pointers, racking up the score quickly. Sophomore forward Angela Starre made nine straight points within the first few minutes, and senior guard Kelsey Scott-Avery made two 3-pointers towards the latter part of the quarter.

Though the Lady Barons pulled ahead towards the end of the quarter, the score was still close at 39-34, Mounties.

The fourth quarter brought some heavy defensive playing with multiple fouls on both teams. The Lady Barons carried out some slick passes and pushed hard for the basket.

Baierl and Starre both made 3-pointers within the first minute of the quarter, stabilizing the Lady Barons in the lead, which they held until the end of the game.

In the last four minutes of the game, players on both teams were continuously called for the foul as the fight for the ball became more intense. The score climbed as free throws were made.

Senior guard Kaitlyn Sonneberger was fouled within the last 30 seconds of the game and made both free throws, bringing the score to 62-49, Lady Barons.

Audience participation gained intensity as the Mount Aloysius supporters made their voices heard in the bleachers. Franciscan supporters rivalled them, cheering energetically for the Lady Barons as the game ended.

The game ended after Mount Aloysius made one free shot that brought the score to 62-50, Lady Barons.

“We weren’t playing like the team that just won three in a row,” said head coach Sean Kirk. “We were playing like a complacent team. … The second half … we stepped it up, on both ends of the floor, especially offensive. It was a heck of a game by all players involved.”

The Lady Baron’s next home game is Saturday, Feb 15, at 4 p.m. against the D’Youville Spartans.