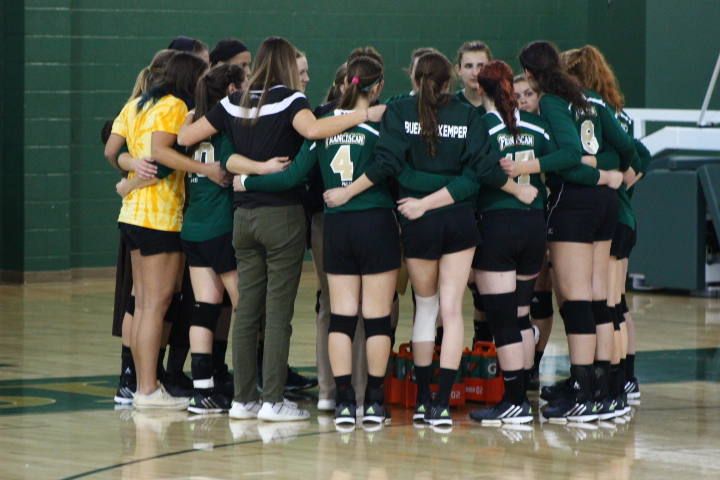 Senior outside hitter Dani Link hit the 1,000 career kill mark in the first set of no. 3 Franciscan University’s 25-21, 25-20 and 25-13 straight set win against no. 6 Mount Aloysius College in the first round of the Allegheny Mountain Collegiate Conference (AMCC) tournament.

“It’s awesome that it’s at home,” Link said. “That’s just amazing. But really, it doesn’t mean all that much. It’s more about the team and what we accomplish together. I wouldn’t be able to have 1,000 kills if it wasn’t for every single girl that’s played with me over the last four years. It’s really just a team effort and it shows.”

Head Coach Kelly Herrmann added, “I think it was perfect. You see Dani out there just playing to win. Seven kills in the first game, totally focused. She wasn’t counting anything. Not that she didn’t know about it or was aware of it or anything but she was focused on helping her team win.”

Like her senior captain, Herrmann emphasized that the first round win was really a team win, right down to the players on the bench and even injured outside hitter sophomore Juli Buehnerkemper, who has not been able to play all season.

“I think Juli epitomizes our team,” Herrmann said. “She is as engaged as anyone in helping her team. Her selfless example to the young women on our team has been really good. That’s an example of how the most unlikely people can affect a team so much and she’s a player who hasn’t even played one point.”

Franciscan and Mount Aloysius played just one week ago with the Mounties emerging victorious in four sets and handing the Lady Barons their third conference loss of the season. Determined to put the loss behind them and move forward in the conference tournament, the Lady Barons were not going to let the Mounties get the best of them again.

“Probably the best thing that happened to us is losing that match last Wednesday because it changes your mental psyche,” Herrmann said. “We came into this match fired up and determined, and we were not going to let that happen again. We expected their best and we got it. It was a tough match, and we just went for it.”

Led by Link’s seven kills in the first set alone, the Lady Barons’ offense came out on fire, which the Mounties could not put out. Franciscan finished with a .248 hitting percentage and only eight hitting errors on the night, tied for a season low in hitting errors.

“I feel like Mary and Becca are making really good decisions,” Herrmann said. “Right now, our setters are playing really, really well and that certainly is a huge reason why the hitters can hit.”

Mount Aloysius’s season is finished while the Lady Barons advance to the semifinals of the AMCC tournament where no. 2 seeded Penn St.- Altoona awaits on Nov. 7.

In the regular season, Franciscan beat Altoona in straight sets.  This was a rematch of last year’s dramatic five-set upset of the Lady Lions in the 2014 AMCC championship match.

Herrmann stressed the importance of just taking one match at a time and trying not to focus on who the opponent is on the other side of the net.

“Playing like a team is our strength,” Herrmann said. “When we play like a team like we did on Saturday, like we did tonight, good things will happen. Altoona is not going to come in and lay an egg in our match on Saturday. We are going to get their best and we better be ready for it, but we’re playing good volleyball and that’s a good thing.”