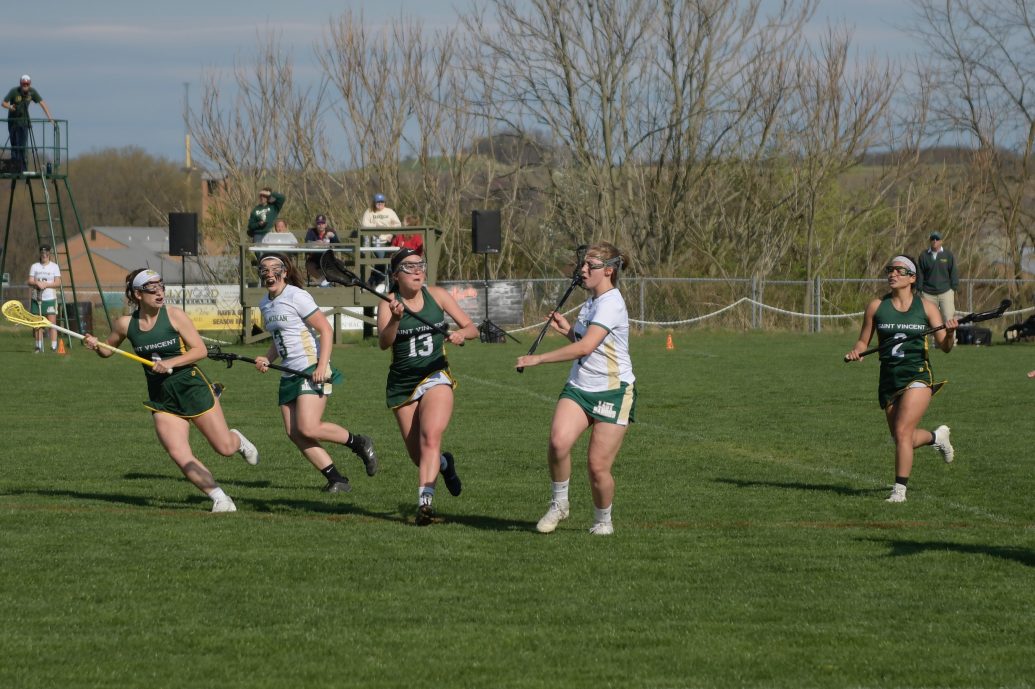 The Lady Barons lacrosse team reigned victorious over its green and gold counterparts, the St. Vincent Bearcats, winning 16-12 on Tuesday, April 16, at 4 p.m.

The Lady Barons played a strong game from the start as senior midfielder Elizabeth McEntee scored within the first minute of playing. The Bearcats, determined to keep their winning streak, copied with a goal of their own. Freshman attack Grace Deegan continued the fight, scoring two goals at 25:02 and 23:35, putting the Lady Barons in the lead at 3-1.

After scrambling for the ball, the Lady Barons got a leg-up from McDonald as she scored one for the team with 8:21 left to play. Offense remained strong as Deegan solidified the lead with two more goals. Senior midfielder Elizabeth Dawyot scored another goal before giving one up to the Bearcats. The Lady Baron defense stayed strong in fending off the Bearcats for the rest of the half, and Dawyot scored another goal, ending the half 10-6.

After halftime, the Lady Barons came back on the field with fire and Deegan scored a point in the first five minutes, shortly followed by a goal from senior attack Treise McCarthy. The Bearcats broke through defense and scored two more goals by 20:55, with Deegan scoring one in between.

Head coach Maura Conant was thrilled with the ladies’ effort. “This is our first time … beating St. Vincent,” she said. “It was a great team effort across the field. We had great transition (from) defense and offense by Beth McEntee, Grace Deegan and Carly McDonald really controlling our attack.”

The Lady Barons next home game will be at 3 p.m. on Thursday, April 25, against Bethany College.