Karaoke competition returns to campus for round two 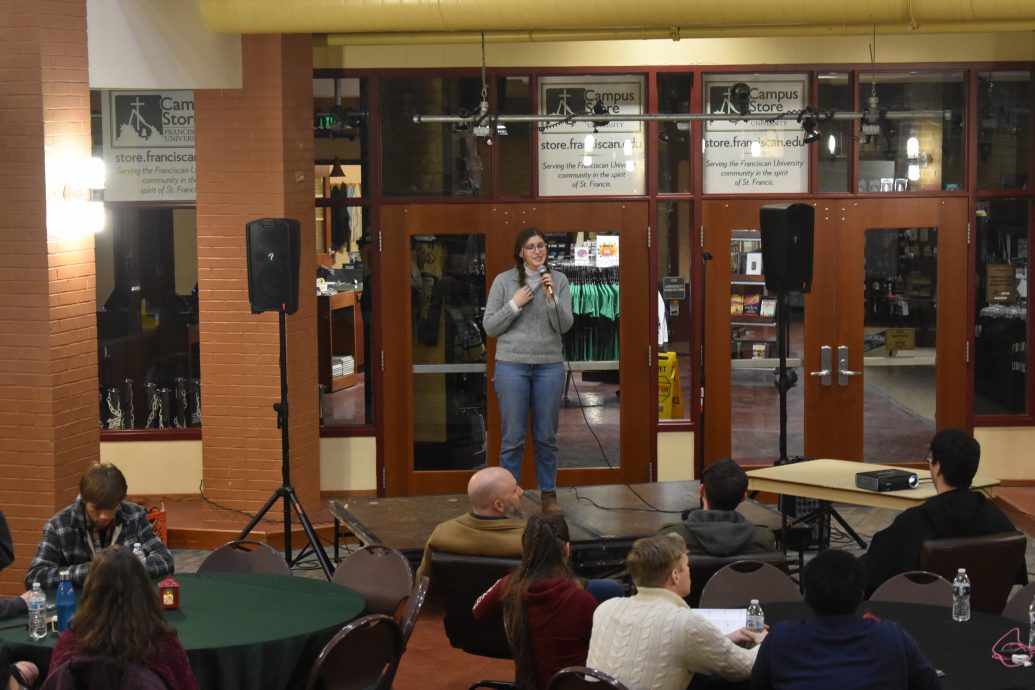 Students competed in two rounds of karaoke to be named Franciscan Voice Thursday at 8 p.m. in the J.C. Williams Center Atrium.

The Franciscan Voice II event consisted of a competition round where the first 20 sign ups could compete for prizes of up to $100. Each competitor received commentary from a panel of judges who picked the three finalists.

The judges for the event were the Rev. Rufino Corona, TOR; Bob Lesnefsky, director of pastoral ministry for student life; and senior Joe Kiss.

The first round of competition saw a variety of songs performed by students. Many students chose to sing songs from musicals, including “I Dreamed a Dream” from “Les Misérables,” “Once Upon a December” from “Anastasia,” “Let it Go” from “Frozen,” “One by One by One” from “Ordinary Days” and “Never Enough” and “The Other Side” from “The Greatest Showman.”

After the 20 students performed, the judges stepped aside to decide on three finalists, and the floor opened up to all students for an open mic section of the night.

The finalists were given a few minutes to prepare a second song.

Daniel Johnson began the final round singing “Bridge Over Troubled Water” by Simon and Garfunkel.

Kiss said that he enjoyed the experience of judging.

“Watching as individuals opened up to their peers to sing was inspirational,” he said, “and as I commented on the performance, I sought to commend that vulnerability. … May God continue to bless the musical journeys of all who attended!”

Despite promises of free pizza and beer, the event began without either. Pizza was eventually provided free of charge with gluten-free options also available. The beer never arrived.

The Voice was hosted by Exc!te.

2022-02-26
Previous Post: Sports Column: Be healthy for your own sake and for others’
Next Post: Students drop commitments to pray for Ukraine at campus holy hour