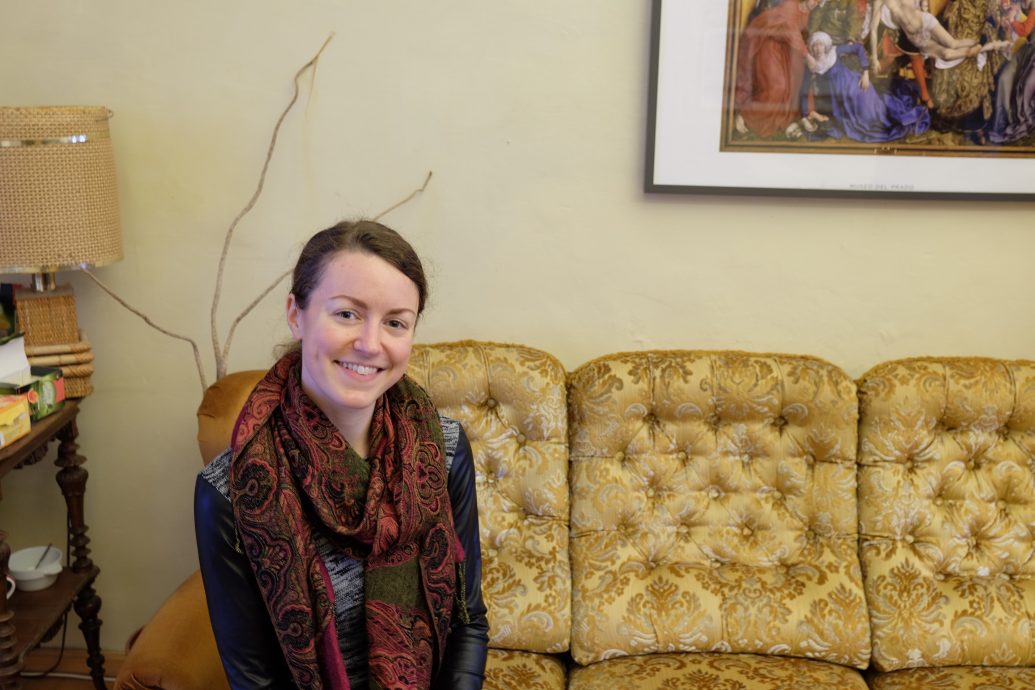 Sutherland, who holds a doctorate in English language and literature, is single-handedly teaching all of the English courses for the Gaming branch, and she is not a professor to miss out on. In addition to the core literature classes, she also offers a course called “Shakespeare and Religion,” to which she invites students of all majors.

Sutherland is certainly one to know that great literature can sweep anyone off his or her feet. She began her college career studying government and history at the College of William and Mary in Virginia. It was there that she ventured into a medieval literature class.

“That class was so fascinating,” Sutherland said, “that I kept taking classes on medieval literature ‘for fun,’ in scare quotes, and eventually I realized that I was so much more passionate about those classes than I was my government classes. So, I switched my major to English.”

Her fascination with medieval literature grew so much that she went on to earn her doctorate from the University of Virginia, writing her dissertation specifically on 13th- and 14th-century saints’ lives and representations of sainthood.

Medieval literature remains her favorite subject to teach, she says: “I love sharing it with students in a classroom because I remember the wonder that I felt when I experienced it for the first time. … I was exposed to this very different, kind of alien, strange, kind of magical and very Catholic literature in college, and it was just one of the most wonderous things that I took away from college.”

Sutherland became Catholic while earning her doctorate. “One of the things that drew me into medieval literature is its fascination with the sacred,” she explained. “The class that I took was on the holy grail, meaning that each of the texts was ultimately about characters searching for God. … These stories weren’t warm and fuzzy; they were strange and surreal. But somehow the sacred was at the center of it, and I think I just hadn’t read anything quite like that and I wanted more.”

“The presence of the sacred in the literature I encountered as an undergrad led me to the lives of the saints, and that played a part, although just a part, in leading me to the Catholic Church,” Sutherland said.

While this is only her second year with the Austria Program, Sutherland is in her ninth year of teaching experience. She had much freedom to teach and experiment with developing courses while working on her doctorate and during her year as a postdoctoral fellow at the University of Virginia, she said.

Sutherland has also translated works from Middle English, including portions of saints’ lives and a mystery play about the Harrowing of Hell, which was performed at an arts festival “by little kids, so it was really cute. And that was fun because it brought medieval literature alive and brought it to the community,” she said.

Sutherland’s expertise doesn’t just stop at centuries-old literature — she has also worked at two different cupcake bakeries. “And I will say that I got offered those jobs because I went there so much and ate so many cupcakes. So, I was an expert,” she said with a laugh.

Outside of work, her interests include writing creatively, hiking and dinosaurs. Sutherland said, “I’m always reading something about dinosaurs. So that’s a love I’ve had since I was three years old. It has stayed with me my whole life and it flares up every now and then. Right now, I’m in the middle of a flare. I just read like four dinosaur books over Christmas break.”

“I recommend to students to follow those random interests and go down those rabbit holes,” Sutherland said. “If you get kind of interested in anything, read all about it ’til you get bored of it. Then that’s another thing you know a lot about.”

As someone who loves reading so much that she can’t decide on just one favorite book, it’s easy for students to see how Sutherland brings her passion for literature into the classes she teaches. She says literature matters because “it cultivates the ability to attend, to really be present to other people, to other worlds, other possibilities. … It gives you an appreciation for beauty, too. … To cultivate an eye for beauty, zooming in on things and really appreciating the wonder in the world really all around you, you have to cultivate a way of seeing, and I think reading can really help you do that. As can the study of any of the arts.”

If you’ve been on the fence about the Austria Program, deliberate no longer; Sutherland is a professor well worth studying under and getting to know.