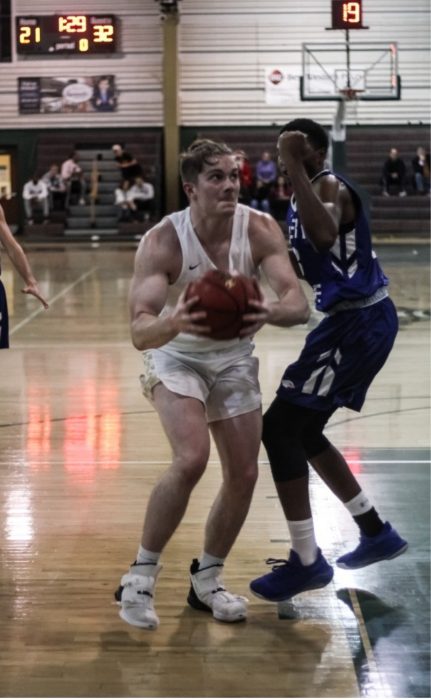 The basketball team has had its ups and downs, and one student athlete has been with them through it all for the past four years. Senior accounting major Joe Vernau is from Irmo, South Carolina, and has played basketball at Franciscan University of Steubenville since his freshman year.

Vernau has played basketball since fourth grade after deciding he liked it more than soccer, with encouragement from his father.

“My dad really wanted me to play basketball,” said Vernau. “I kind of fell in love with the team aspect there. He initially pushed me. I made the decision for myself though once I hit middle school and high school.”

“He encouraged me to keep playing. … My dad played college basketball, and I was always a bigger kid, tall and lanky, so it just seemed like a natural fit for me physically at the time.”

Vernau said he loves the family atmosphere that the men’s basketball team has given him during his time at Franciscan.

“You know, leaving home, I didn’t really have a strong family unit to rely on coming from high school,” said Vernau. “The basketball team gave me family, they gave me friends, they gave me great role models and great mentors in my young adult life.”

Vernau recently made a career high in both points and rebounds while playing Bethany College, which became the first post-season game that the men’s basketball team won in Franciscan history.

COVID-19 has affected all the sport teams, but even more the indoor sports like basketball.

“We have to test like three times a week, that’s pretty crazy,” said Vernau. “We (the men’s basketball team) only got shut down once. I went into quarantine for a week back in November, (but the team) wasn’t shut down. I just got removed from the program and they kept on doing practices without me.”

Vernau has suffered multiple injuries over his four years of playing basketball at Franciscan but has kept playing every semester.

“I think every year I’ve gotten the urge to call it a career,” said Vernau. “My freshman year I ruptured a disk in my lower back. It was a pretty serious injury, and I thought about calling it quits. Sophomore year I broke my leg; junior year just had a lot of mental stuff I was going through. Then this past year I actually retired in November, because I did a lot of damage to my knee, didn’t think it was worth it, but ended up coming back. And then I’ve been starting for the whole year, that’s been cool.”

Vernau said being a senior on the men’s basketball team is definitely a different experience compared to previous years.

“I remember as a freshman looking up to the seniors,” said Vernau. “And now, as a senior, having to both lead a team, help coach the younger guys up, while also keeping yourself in shape and being the best version of yourself in your senior year is all pretty hard to juggle.”

Even though he’s suffered injuries and has sat out seasons, Vernau said it was just sitting on the sidelines that brought him some of his best friends.

“Going back to my sophomore year when I broke my leg, I was out for a number of games,” said Vernau. “I had to remove myself from the team and be a bystander instead of playing. There (were) a couple other guys out at the same time, and it’s actually how I ended up meeting two of my best friends, through us bonding through injury and rehabbing back to being able to play, that was cool.”

One of Vernau’s favorite memories is riding the over five-hour bus trip to play games in Buffalo, New York.

“We used to goon around a lot on trips to Buffalo,” said Vernau. “We would just do crazy stuff on the bus.”