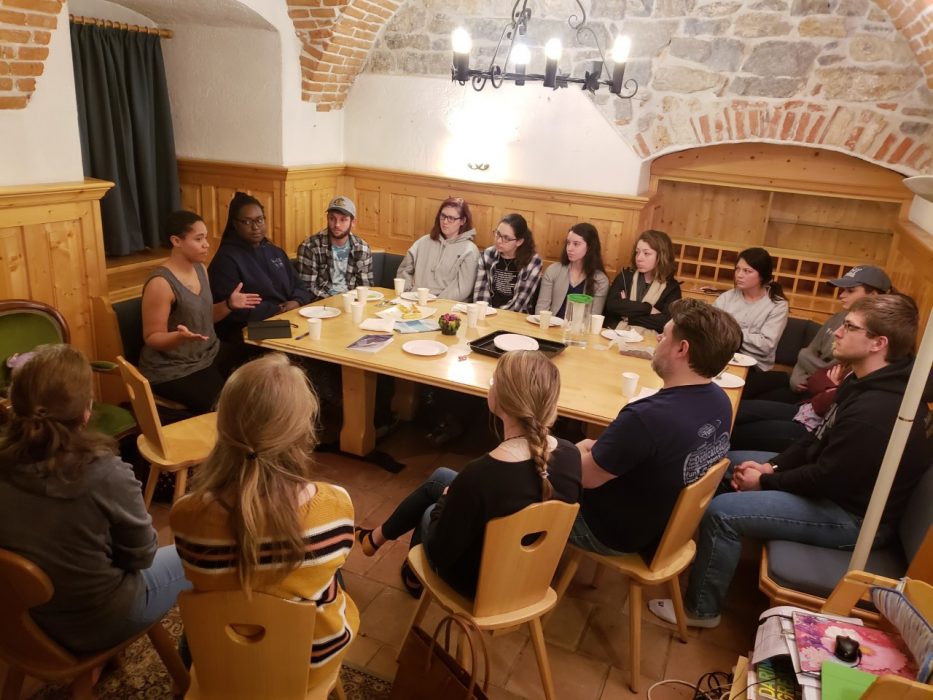 A collaborative event themed around caregiving will be held at Franciscan University of Steubenville for students and professors from similar fields to come together and learn from each other Feb. 12 in the J.C. Williams Center.

The event is “a mini-conference in which students will take over the J.C., and they will share talks happening at three different sessions around the topic of caregiving,” explained Megan Reister, associate professor of special education and early childhood.

Reister is one of the primary organizers of the event, which was originally conceived in 2019 when she and Catherine Recznik, professor of nursing, decided to bring their two fields together so they could learn from each other.

As the two developed a plan for the interprofessional collaboration event, Reister met Sha Smith, a resident director on the Franciscan Austria campus, while teaching in Austria spring 2019.

“She sat next to me during the opening of the school year faculty/staff meeting, and the rest is history!” Reister said.

Reister and Smith started a friendship and talked about both education and being a social worker in a school setting. Smith suggested Reister include social work as well as nursing and education in her interprofessional collaboration.

A little while later, in summer 2019, Smith was diagnosed with ovarian cancer and died after a hard battle in December 2019.

Reister said, “The first (interprofessional collaboration) event to take place was weeks after the funeral, so all this was fresh.”

For the first conference in 2020, Reister prayed in discernment about the event. She then asked if the event could be called “The Sha Smith Interprofessional Collaboration Event” to honor Smith, who had inspired and exemplified an even greater spirit of collaboration, Reister said.

The theme of the first conference was collaboration between disciplines that are both different and similar. Kathleen Belanger, a social work professor at the university at the time, joined the team.

The first event was held in the St. Joseph Center’s Totino Room, and, after the event, an attendee suggested that it would be better if it were bigger and held in the J.C. Williams Center.

In 2021, in addition to social work, nursing, education, psychology, and human development and family studies were added to the disciplines in the event.

Reister said, “Last year, the theme was on identity and how we can know each other by active listening.”

The 2021 conference was completely virtual on BlackBoard due to COVID-19, so the team could not use the J.C. Williams Center.

The 2022 conference will have a theme of caregiving and is based on Hebrews 8:10. Along with disciplines from previous years, both counseling and the Center for Leadership will be participating. It will also be large enough to be in the J.C. Williams Center.

The 2022 Sha Smith Interprofessional Collaboration Event will start at 8:30 on Saturday, Feb. 12, with Mass in Christ the King Chapel. After the Mass, attendees will gather in the Gentile Gallery.

The event is free, but there will be a check-in table with raffle tickets.

Following a keynote address, there will be three sessions of talks in five different locations throughout the J.C. Williams Center, about 15 talks in total. Reister said that each session will include a “20-minute presentation and 10-minute Q&A. The talks range from international adoptions to ‘What is mentoring?’ to family dynamics to the death of a sibling.”

The entire event is volunteer-led and operated, relying solely on donations.