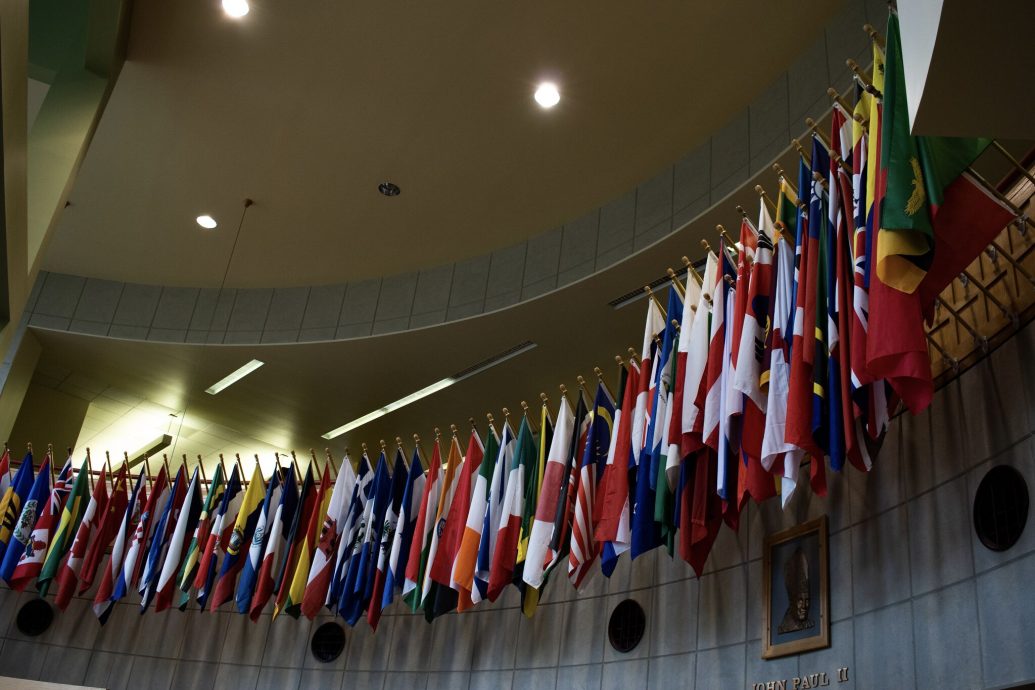 Plenty of students and visitors have most likely looked up as they entered the St. John Paul II Library and seen the many colorful flags hanging there. While their colors are certainly eye-catching, the flags were not meant simply for decoration. Each flag that hangs in the library represents a student that has physically studied, or is studying, on campus from a foreign country.

Recently, the St. John Paul II Library has acquired seven new flags for the display, representing seven new students from foreign countries new to the university. These countries include Austria, Bermuda, Iraq, Singapore, Spain, Vietnam and Zambia. Beforehand, the Austrian flag was only displayed in the Gaming, Austria, sector of the library but has been moved to the main display to honor the Austrian student.

Amy Leoni, director of the St. John Paul II Library, said, “I think a lot of people see the flags, but they don’t realize that they actually do represent a student that could be here.”

“The library routinely updates the flags based on if we get a new student from a new country that we don’t already have their flag for,” Leoni explained. “This year was a big year, with seven more international students and the countries that they’re from.”

The library only puts up flags for the international students that are physically present on campus, and not any online students.

“If we did online, we’d probably have a lot more,” said Leoni.

International students are always welcome to come to the library and take a picture with their flag.

“A lot of times we’ll see people come in and point and hear ‘That’s mine!’” said Leoni, talking about the flags and the students they represent.

“We only have so many slots in (the International Lounge), so when we have students that are from a different country and we need to put a new country up, we try to reflect that during their four years here,” said Juliana Daugherty, director of orientation and international students.

“We try to make sure that those who are currently here studying, that their flag is up representing,” Daugherty said. “What we try and do is just recognize and appreciate the cultural heritage and diversity of our Franciscan University community, so that’s the main reason why we have all the flags up there.”

This school year of 2019-2020, there are 18 different countries represented on campus. Daugherty says that 18 countries is the highest number she’s seen since she began working at Franciscan University.

“We usually range from nine to 13 or 14,” said Daugherty, “but this year we have 18 different countries represented here on campus.”

Daugherty says that flags are a good way to make the international students feel welcome, appreciated and recognized for being here from other countries.

“I think Franciscan becomes their home,” said Leoni, “but it’s nice to know that we recognize where they’re from.”