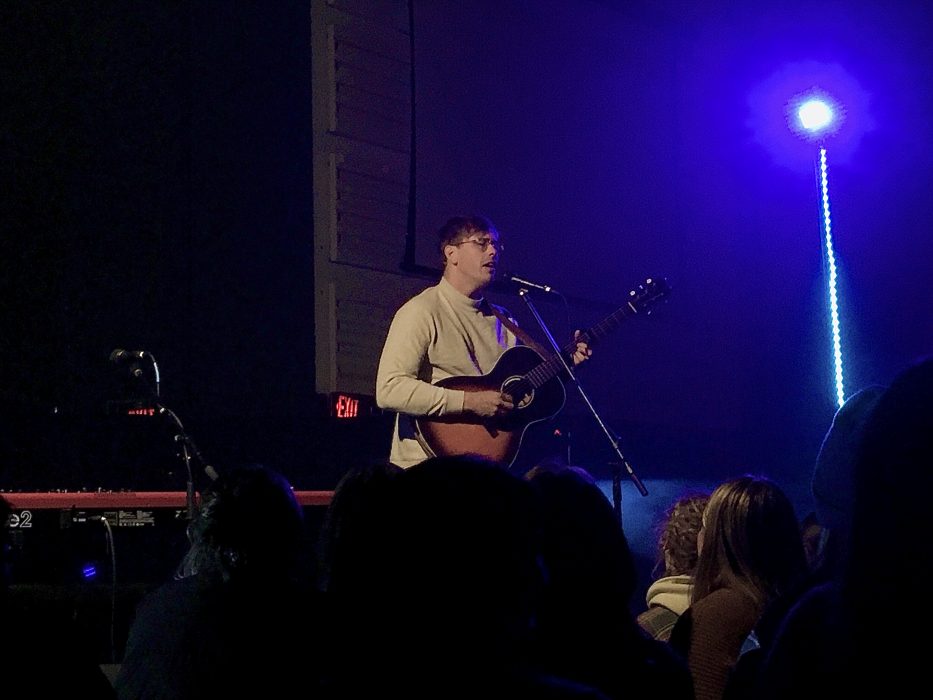 On Friday, an indie-pop artist performed for students in Finnegan Fieldhouse at 9 p.m.

Jordy Searcy is a singer and songwriter best known for his hit song “Love and War in Your Twenties.”

Doors opened at 8 p.m., and a variety of hit songs, such as Taylor Swift’s “Love Story,” were played to pump students up for Searcy.

When Searcy came out, students packed the space in front of the stage. Searcy was met with cheers and applause as he started his opening song.

After his opener, Searcy explained the recording process behind his popular song “Molly.” Searcy said he initially planned to leave it off the record and just post it to TikTok.

At one point during the concert, Searcy left the stage to play on the floor at the same level as the audience. Students formed a circle as Searcy sang “Explaining Jesus.” The lyrics fed into a rendition of “Amazing Grace.”

After returning to the stage, Searcy did a mini question and answer session where he answered audience questions. When asked about his favorite cheese, Searcy said he likes a sharp gouda.

The audience cheered and sang along when Searcy sang “Love and War in Your Twenties.”

Searcy closed the performance with his song “Favorite Days.” He said it was about his brother and childhood best friend.

After shouts for an encore, Searcy returned on stage twice to play two more songs.

Sophomores Mikaela Telles and Angel Pham both said they appreciated the intimate feeling Searcy created during the concert.

Telles said, “He was very wholesome.”

Pham added, “He’s very personable and comfortable with everybody, which was so fun to be around.”

The concert was co-sponsored by Residence Life and Student Government. No entry fee was charged for students.