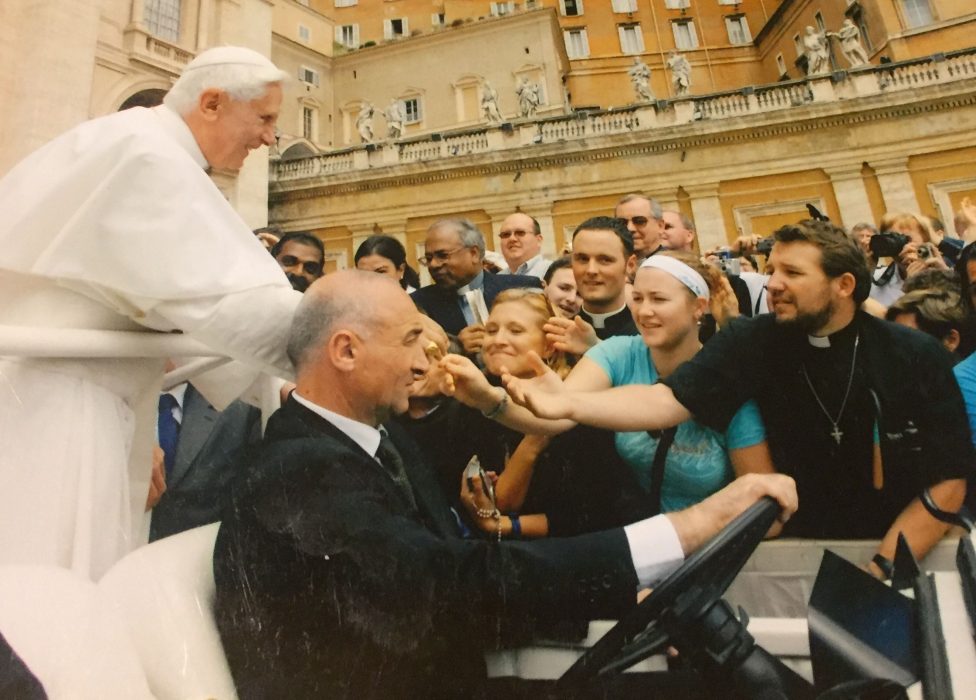 When the phone rang toward the end of 2019, the Rev. Michael Gielen was in Rome, preparing to return to his homeland of New Zealand after a three-month sabbatical.

Over the past several weeks, Gielen had visited the Holy Land for the first time, studied at Oxford in England and was now closing the trip out with some time in the Eternal City. Gielen would then return to New Zealand’s national seminary, where he’d served as director of formation since 2014.

However, Gielen’s caller, Archbishop Novatus Rugambwa, had news changing that. Pope Francis had appointed Gielen to be auxiliary bishop of Auckland, said Rugambwa, apostolic nuncio to New Zealand. Would he accept?

Gielen immediately took the request to the only person he could talk to about it. “It’s a pontifical secret so you can’t tell anyone,” Gielen said. “I went straight to the chapel and shed a few tears because I knew a little about what was waiting for me. … But I’ve never said no to Jesus, so I thought, ‘We’re not going to start now.’”

When he’s ordained on March 7, Gielen, a 2007 alumnus of Franciscan University, will become one of at least four bishops who graduated from the school. As the seventh bishop of New Zealand, he will assist Bishop Patrick Dunn in overseeing the Diocese of Auckland, home to almost 40% of the entire country’s Catholics.

Gielen’s journey to that fateful phone call in Rome began 48 years earlier, when he was born in Cambridge, New Zealand. The oldest of six children, Gielen grew up on a dairy farm and loved it. His parents weren’t practicing Catholics, but that changed when they had a reversion of sorts when Gielen was 8 years old.

“It was absolutely black and white between what our family had been like before,” he said. “I noticed a massive difference in my life. … (And) when I was about 9, I felt called to priesthood in a very profound and everlasting way.”

After working in the justice department for a couple years, Gielen began seminary formation at New Zealand’s Holy Cross College in 1992, which culminated in being ordained a priest at the age of 26 for his home diocese of Hamilton in 1997.

He served for four years as an assistant priest, starting a youth program and other evangelization movements. In 2002, he was appointed pastor of two parishes, one in the city and another in the country, and remained in that position until 2005.

Throughout this time, however, Gielen felt there was something he was lacking. As he put it, “I felt like I had studied theology, but it wasn’t a part of me. It was more of a theory that I really wanted to own, but I didn’t know enough of it.”

He asked his bishop for permission to study theology overseas earlier in his ministry but was told to wait. In 2005, however, he was given the green light to pursue a master’s in theology at Franciscan University.

“I told the bishop, ‘Our young people are inspired by Scott Hahn and Mark Miravalle and other lecturers (Franciscan) had, and we’ve got to be with them on this journey.’”

Upon arriving in Steubenville, Gielen stayed in a house for studying priests kept by the Rev. Richard Tuttle, then pastor of Holy Family Parish in Steubenville.

“I respected him very much,” Tuttle, now retired and living in Florida, wrote in an email. “When he would (minister at Holy Family), he was well received. … He helped out at retreats by hearing confessions and giving witness talks and giving spiritual direction.”

“I saw the young people really living (their faith) in so many ways, through adoration, the outreaches to the poor, mission,” he said. “I was so inspired by that place and the graduates I was with and their faith and love of the Church.”

A lifelong sports fan, Gielen was pleasantly surprised to learn about Franciscan’s rugby team, even playing in a few games for the team.

“I remember they took me out to try and get me to play,” Gielen said with a laugh. “It’s the only time I’ve been wined and dined by men.”

While he didn’t join a household, Gielen struck up friendships with many students and friars, including the Rev. Dave Pivonka, TOR.

“He was energetic and passionate,” Pivonka, now president of Franciscan University, said. “One of the things he loved about Franciscan was that we can dream big. He said that was a blessing for him and kind of broadened his perspective about what might be possible for the Church.”

Gielen said he found a strong community with the graduate/non-traditional (GNT) students. Richard Sealy was in his second semester of graduate theology studies at Franciscan when he first met Gielen and quickly sought to become his friend.

“I saw him come into class, thought he looked cool, heard he was from New Zealand and immediately invited him to come to a men’s group we had just started,” wrote Sealy in an email.

However, it took Gielen some time to warm up to the social aspects of being a student at Franciscan, according to his friends.

“Our first impression of Father Michael was that he was quiet and studious,” said Kelly Sealy, who met her future husband, Richard, during their GNT days. “We couldn’t have been more wrong. … In time, Father Michael became the very heart of the GNT community.”

“He is incredibly funny — able to laugh at himself as well as gently make his friends laugh at themselves,” she added.

The Sealys and Gielen grew particularly close: Richard’s passion for football and the Pittsburgh Steelers became shared by Gielen, who presided at the couple’s wedding at the end of their graduate studies. It was around the time of the wedding that he told the Sealys what he hoped to bring back with him to New Zealand after graduation.

“He shared his dream of doing something important for the young and (he wanted) us to come collaborate with him in that effort,” Kelly Sealy said.

Said Gielen: “The biggest thing I learned (from Franciscan) was that young people can and do have a very real and life-giving faith. A lot of New Zealanders can be cynical about the faith and that there’s no hope for their children to practice their faith. I just say no, no, no. No one can ever tell me it’s not real. I’ve seen it and experienced it (at Franciscan).”

In 2008, with Pivonka’s help, Gielen brought two young women from Franciscan to New Zealand, where they stayed until 2010, to help him start a youth program.

That same year, Gielen asked the Sealys and their two young children to move to New Zealand and step in as missionaries, which they accepted. In New Zealand, the Sealys ran high school and junior high youth groups, groups for men and women, a young adult group and a ministry to young mothers. They were the only full-time youth ministers in the entire country.

The Sealys also welcomed their third child in New Zealand, who coincidentally was born on the same day, in the same hospital and with the same midwife as Gielen’s nephew.

“Father Michael was the only ‘family’ we had since we were across the globe from home,” Kelly Sealy said. “We all hung out in one hospital room (that night) with two newborns and all the new parents.”

After returning to the United States in 2012, the Sealys kept in frequent contact with Gielen, who was being called to increasingly more responsibility.

After starting another stint as a parish priest, Gielen concurrently served as diocesan vocations director from 2009-2012. He took leave in order to pursue a licentiate in theology at the Pontifical Gregorian University in Rome, where he would sometimes run into students at the North America College whom he knew from Franciscan.

He returned to New Zealand in 2014 and was appointed director of formation at Holy Cross Seminary in Auckland. After his ordination, he will remain in that position until plans for a replacement are made and he returns to being a pastor, in a way.

Being at a parish was like working at a sheepstation, he said – it’s a broad ministry that has many different responsibilities. Being at the seminary, while a very good ministry, felt much more institutional with the classrooms and teaching.

“I missed meeting people from all sorts of different backgrounds and … helping them get close to our Lord,” Gielen said. “I’m looking forward to returning to that as a bishop.”

While Gielen said he was surprised by the appointment, his friends knew that day was coming.

“He has a magnetic personality and an unswerving commitment to bringing people closer to Jesus,” said Richard Sealy. “He is exactly the person the Church needs, especially the Church of New Zealand.”

Pivonka had similar things to say: “He’s pastoral, he’s visionary. He really loves the Lord and wants to be able to brings others into a relationship with him.”

As for Gielen himself, he’s aware of what lies ahead. The Catholic Church around the world has suffered immensely in recent years, and especially in Gielen’s part of the world. That won’t deter him from answering the Holy Spirit’s call.

“One of the challenges is … retaining a sense of hope,” he said. “We’re people of the resurrection, of the light. I’m trying to instill a hunger for faith and for Jesus.”

2020-02-27
Previous Post: Jacques Philippe comments on the importance, beauty of praise in the Spirit
Next Post: Friend With Car has to finish homework, students in turmoil