Hundreds of Franciscan students join the March for Life 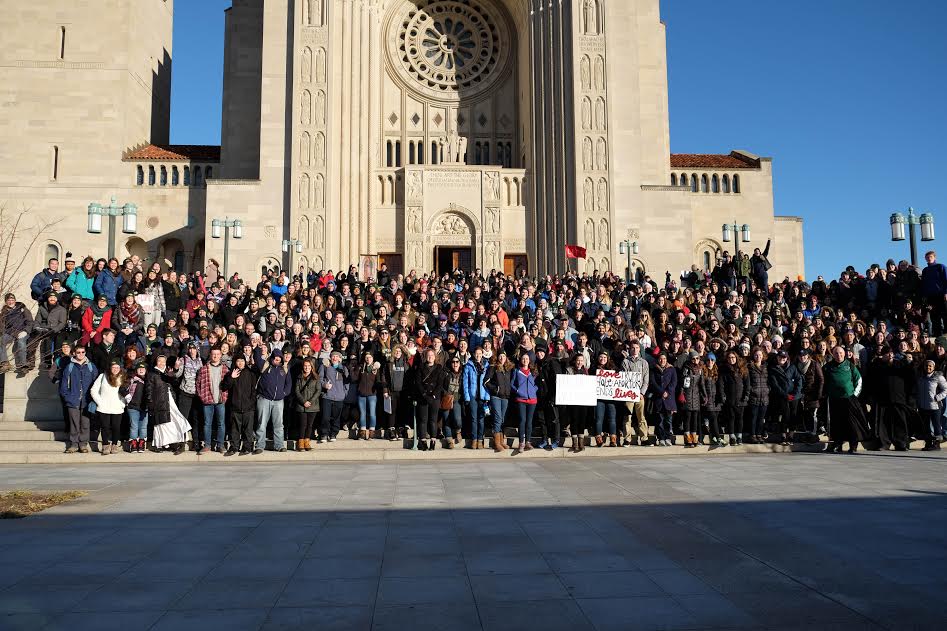 Walking among the hundreds of thousands gathered in Washington, D.C. for the annual March for Life, 800 Franciscan University students united as a single voice to send a powerful pro-life message.

The March itself, which after a rally on the grounds of the National Mall proceeds down Constitution Avenue and ends on the steps of the Supreme Court, is the 44 of its kind, deliberately held on January 27, the anniversary of the Roe v. Wade decision.

Students marched behind an instantly-recognizable, forest-green banner which under the university name read, “Before I formed you in the womb I knew you, before you were born I dedicated you,” in reference to Jeremiah 1:5.

Armed with rosaries and pro-life signs and banners, students walked alongside faculty and staff in support of the right to life, a dignity which Pope Francis deemed, “the first among human rights.”

Among the university marchers were three instantly recognizable faces: university president, the Rev. Sean Sheridan, T.O.R; the Rev. Nathan Malavolti, T.O.R,. vice president of pastoral care and evangelization; and the Rev. Dan Pattee, T.O.R., director of mission and Franciscan charism. The friars’ presence was representative of the marchers dedicated to the religious life.

Malavolti spoke on behalf of the university as to the importance of the March in our current age.

“Christ wants us to stand up for all those little ones who lost their lives over these 43 years,” said Malavolti. “We need to be vigilant, we need to pray that our society changes, and our witness here…is important.”

Sheridan said, “It’s good to be surrounded by so many pro-life people who are here to be the majority now in the world, and to be able to speak out for the unborn.”

Senior biology major, Annie Babcock, coordinator of the Franciscan contingent to the March for Life, understands the March as an expression of legal freedom.

“The March is an exercise of our First Amendment rights,” said Babcock. “In this country, we have the legal right to express our grievances to our government at our nation’s capital.”

Babcock said, “Not everyone in the world has the ability to do that.”

“We began the preparations for this year’s March after last year’s March,” said Babcock, a testament to the lengthy preparations required on the part of Students for Life to ensure safe travel conditions for students to and from the event.

Babcock said the March for Life is an opportunity to “stand for something we all believe in.”

Buses for Washington, D.C. left campus at 11:30 p.m. on Jan. 26 following a holy hour. After attending a morning Mass at the Basilica of the National Shrine of the Immaculate Conception, students frequented a highly anticipated pre-march rally, graced this year by recently elected vice president Mike Pence.

“Life is winning again in America,” declared Pence in his address, to the responsive cheers of the hundreds of thousands braving the nation’s cold capital. He praised an unprecedented positive movement in America, evidenced by recent elections of “pro-life majorities” in Congress.

Before concluding, Pence added that newly-elected president Donald Trump would, as early as next week, appoint a pro-life Supreme Court justice dedicated to upholding “the god given liberties in our Constitution in the tradition of the late and great justice Antonin Scalia.”

This year’s cloudy conditions were of stark contrast to 2016’s blizzard-like conditions, which left seven buses full of returning students were stranded on the Pennsylvania Turnpike for 45 hours.

Despite the cold, the lack of sleep, a lengthy march and all other complications of a pilgrimage, still Franciscan University attends the March for Life. Every year, until the pro-life platform is the norm in America, representatives from the university will march beside hundreds of thousands of others dedicated to life for the most vulnerable: the unborn.