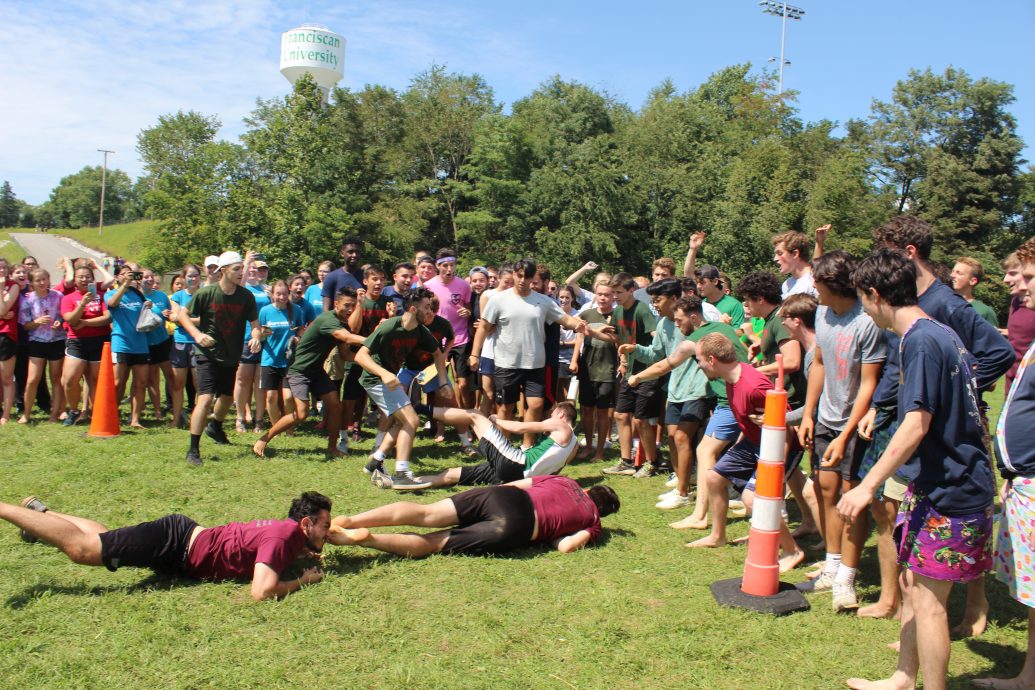 Franciscan University of Steubenville men’s and women’s households met out in the sunny fields to compete in the Household Olympics Sept 4, which were held at the Intramural Field from 10 a.m. to 1 p.m.

The Intramural Field was split in half, with male households on one side and female households on the other. Seven different games were played on each side. Once all the teams had cleared those games, the households would each switch to the opposite side of the field to complete the other seven games.

There were a variety of games, such as soap hockey, where students played miniature hockey on a tarp covered in dish soap. Another game was an egg toss game, where one team rode on a roaming ATV while trying to dodge eggs thrown by another team. There were several relay races, one including a chair-stacking challenge and an obstacle course.

Regina Angelorum took the women’s trophy for the ninth Olympics in a row. Brothers of the Eternal Song and Guardians of the Divine Will were declared co-winners after an exciting and hotly contested rematch, and Brothers walked away with the trophy.

Music, drinks and snacks were provided for the students and staff who came to the event.

Household teams screamed and shouted as they prepared to take on each challenge.

“No pain, no glory!” said senior Micholl Dumanig as he and his team approached the next game determined to win.

Those who were not part of a household were encouraged to participate with the households.
For a lot of students, this was their first Household Olympics, even upperclassmen.

“My first Household Olympics, last year, was canceled because of COVID,” said junior Julia DiBiase. “You can feel that everyone has joy.”

Among other commitments, households meet for the celebration of Lord’s Day Saturdays at 4 p.m. Anyone interested in visiting households can find more information about commitments in household common rooms or on the household Instagram accounts.