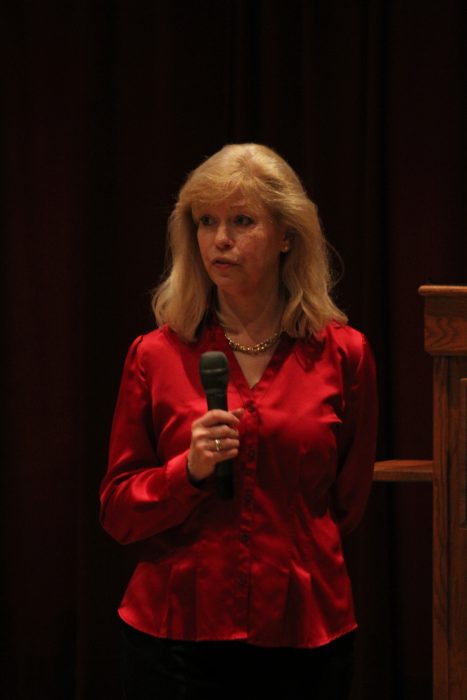 The laywoman leading the cause of canonization for an Italian Capuchin who died in 1978 spoke in the Gentile Gallery Wednesday, March 24, at 9 p.m.

Klapatch said that St. Pio of Pietrelcina (Padre Pio) and Padre Domenico were close friends, and that Padre Domenico was filmed bilocating at the funeral procession for Padre Pio.

Klapatch spoke on Padre Domenico’s early life and said he had many spiritual gifts, including the ability to read souls, bilocate and experience the stigmata.

Klapatch said that Padre Domenico had a strong devotion to the Holy Face of Manoppello, or “Volto Santo,” which some say is the true face of the resurrected Jesus on a transparent cloth woven from byssus fiber, or sea silk.

Klapatch projected images of the Shroud of Turin, the Sudarium of Oviedo and the Volto Santo on screen. Klapatch also displayed an image of the three shrouds superimposed on each other, and said they match up to form the true face of Jesus.

“Everything lines up completely with all three images,” Klapatch said,

The first time Padre Domenico saw the Volto Santo, he recognized Jesus’ face as the face of the stranger that pulled him out from earthquake rubble as a young boy, Klapatch said.

Klapatch concluded the presentation by leading attendees in prayers to the Volto Santo and Padre Domenico. Attendees were then able to pray with a relic of Padre Pio and write prayer requests to be placed in the notebook on Padre Domenico’s tomb.

Junior Mary-Kate Schratz said, “I took away from it how beautiful the image is and just like the Lord’s timing, how we are hearing about Padre Domenico and the Volto Santo right now.”

Schratz’s household, Mary, Spouse of the Spirit, organized the presentation.