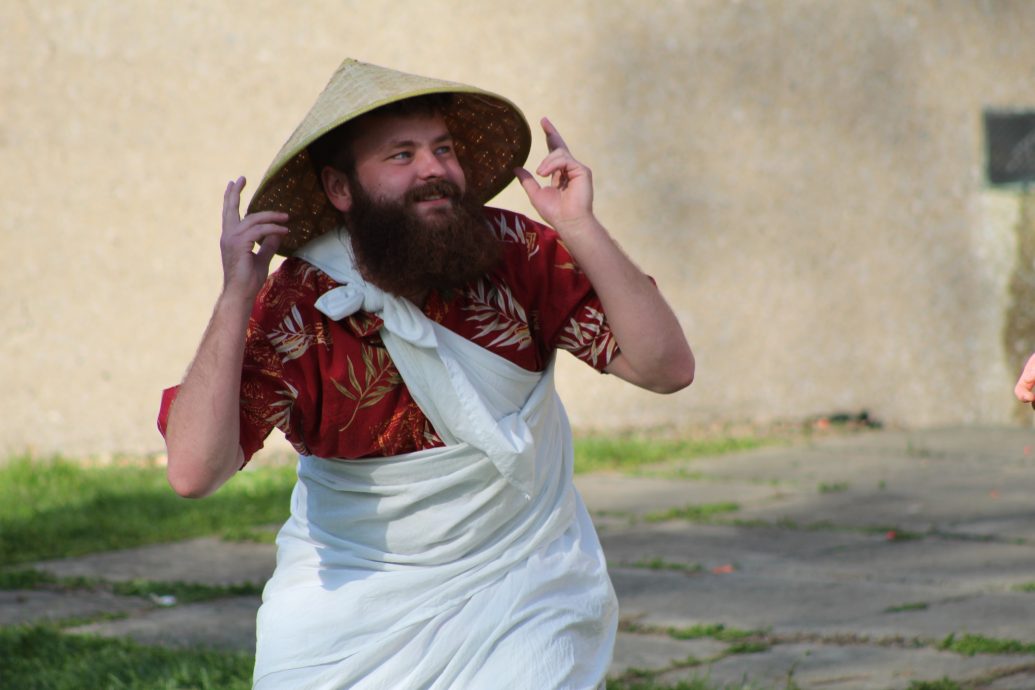 Lion of Judah household performed an original comedy to two large and boisterous crowds on the grass between Christ the King Chapel and the St. John Paul II Library at 5 p.m. Friday and Saturday, April 23-24.

The parody mashup “Top Gun: 422 B.C.” –– which, according to the “LOJ Bill” was written by household members juniors Mac Williams, Clay Boyle and Roddy Lowder –– was a spoof on several movies, including “Top Gun,” “Pulp Fiction” and “Shawshank Redemption,” and the entire story was set in Ancient Greece.

With the admission fee, each audience member received a water balloon to throw at the actors over the course of the performance. Additionally, when onions and bananas were thrown onto the stage, the audience yelled “onion!” or “banana!” and whichever performer was closest to the produce picked it up and took bites out of it in between his lines.

To start the play, the character Maverikus, son of Hermes, and played by sophomore Nate Lamansky, poisoned his philosophy teacher Socrates so as to pass an exam.

Later, the play turned into a musical with the performance of the original sea shanty “Randy Dandy O” and the comedic “Madman’s Dilemma,” in which the character Goose asked himself the existential question, “Do I like ducks more than chickens?”

In the last act, two characters performed a rap battle to win the lady.

Junior Molly Propson said, “It was actually really funny. I was impressed!”

Freshman Samantha Apanasewicz said, “Even though they had no set or (almost) no props, they were still able to convey the story very accurately but in a funny manner. When they had the cardboard box and they wrote ‘boat’ on it, and then ‘police boat’ came –– that was funny.”