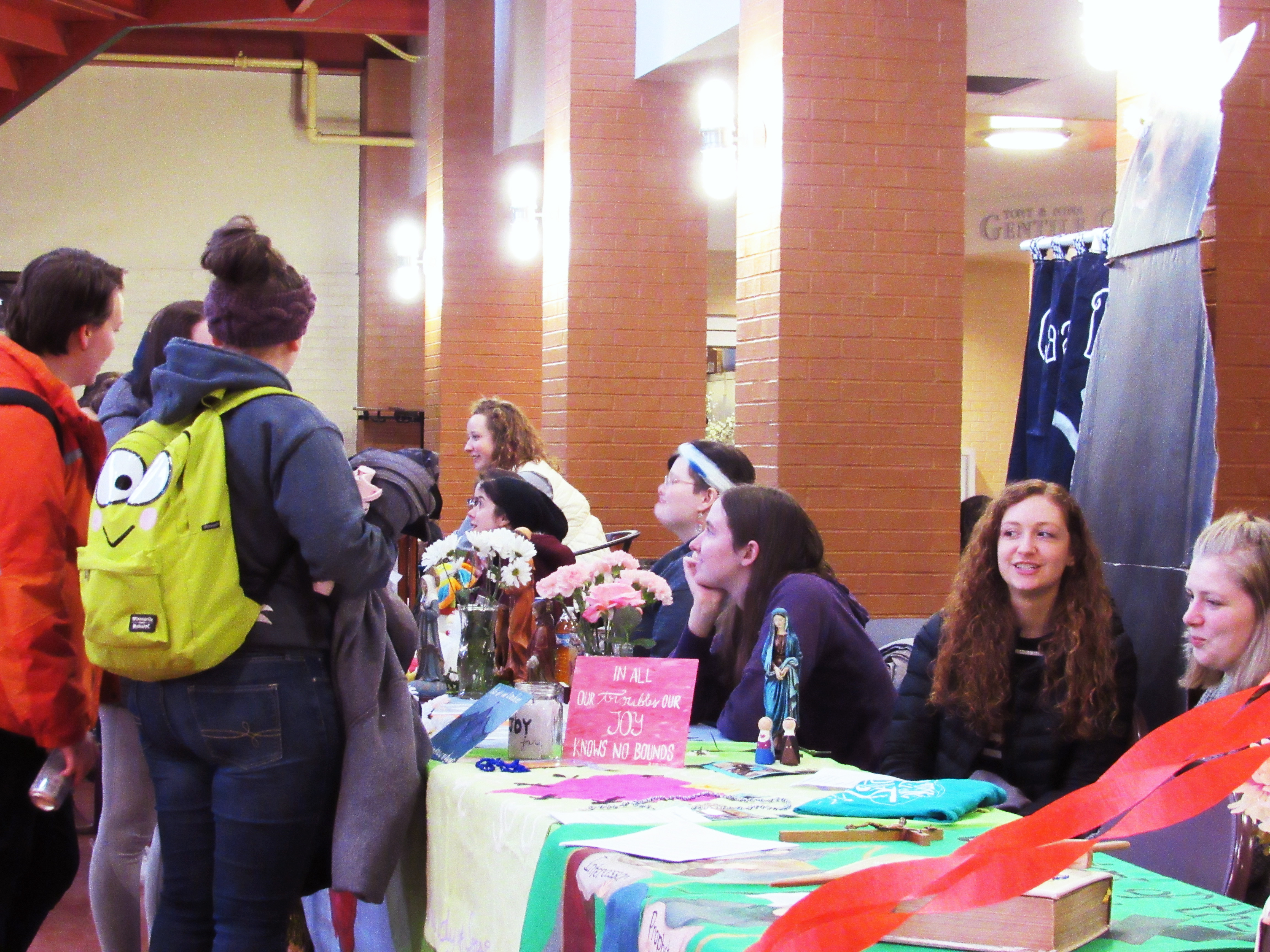 On January 23rd and 24th, the men’s and women’s household fairs were held on the bottom floor of the J.C.Williams Center from 10 a.m. to 2 p.m. Both events were fairly well attended with curious students looking to see if they felt drawn to a particular household, as well as students already in households dropping by to visit friends.

On Tuesday, men’s households attracted students walking through the J.C. by upbeat music and hot chocolate, provided by Director of Household Life Bob Lesnefsky. There were many tables lined up with banners, significant statues and household brothers ready to share about their particular household.

Anthony Hernandez, a junior theology major, commented on the importance of “exposure for smaller households” at the fairs. As for the men walking down the rows of tables, Hernandez said, “The fairs are important to get a general scope of the households and to see if you have chemistry with the guys.”

Michael O’Connor, a junior economics major, and Jacob Zamarron, a sophomore catechetics major, were manning the ‘Martyres Regis’ household table. O’Connor spoke about the need for “men striving for holiness together, but also the importance of the covenant (of the household).” He also spoke of the “satisfaction” for the desire of brotherhood that household can offer.

Zamarron, an intent to the household, said he had been looking for “a sense of community” which he discovered among those men. “Everyone in the household is friends, which is a big focus of ours,” he added.

On Wednesday morning, the bottom of the J.C. was filled again with the women’s household fair. It was better attended, mostly likely due to the unbalanced ratio of men and women on campus. Everyone was excited, both women at the tables to share, but also those students who ambled among the tables.

Kaitlin Greer, a freshman psychology and business management major stood to the side reading some information sheets she had gotten from one of the tables. “I am looking for a small household, somewhere to have support and to grow together in a small group,” said Greer.

At the ‘Servants of the Eucharistic Heart of Jesus’ table, Hope Bergsma, a sophomore philosophy major, talked about how she “loves the strong friendships that are focused on Jesus in the Eucharist. That is one of our charisms.” She also mentioned that “(Household) is a support of sisters that can help with advice, both on spiritual and life things.”

At both fairs, the desire for community was a frequent focus. The households seem to offer the family-like support many students crave while at college, and the fairs were part of the means to grow and expand these groups with a central theme of spiritual growth.

2018-01-30
Previous Post: New household welcomed and inducted into the Franciscan family
Next Post: Letter from the editor: The present moment