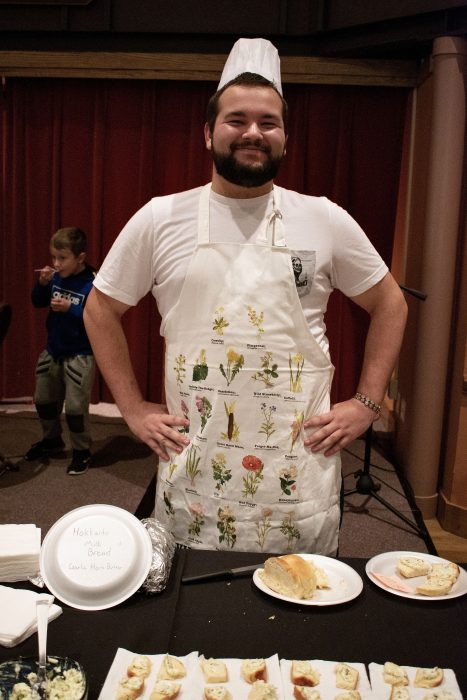 Households put their talented bakers to the test at Franciscan University of Steubenville’s first Household Baking Competition in the Gentile Gallery Tuesday night.

Samples of food made by the households and Tim Horton’s coffee were available for those who purchased wristbands for entrance: $2 for three samples and $5 for unlimited samples.

Households exhibited their creative baked goods on tables wrapping around the perimeter of the Gallery, and attendees had the chance to enjoy a variety of samples, such as turtle cheesecakes, rum cake muffins, beer bread, Grandma Camella’s Oklahoma State Fair–winning jalapeno cornbread stuffing and much more.

The competition was to determine which household made the best bread and which made the best sweets. Three judges decided who would take home the prize money raised that night, selecting one household for each category.

After about almost an hour of sampling, taste testing and judging, the judges made their difficult decision. The household who made the best sweets was Handmaids of the Lord for their lemon blueberry cupcakes, and the winner of the bread category was Soldiers Under Command for their Hokkaido milk bread with a garlic herb butter.

In addition, a couple of honorable mentions were announced, with superlatives such as “who should own her own cooking show” and “best dancer.”

Senior Becca Elrich said that the competition was “really good for the university” and remarked that, as opposed to the Household Olympics, the night was an opportunity “for non-athletic people to find strength in baking, rather than physical strength.”

Sophomore Patrick Frazier, whose favorite from the night was the Soldiers’ winning bread, said that he was glad most of the households involved were on the smaller side “because not everyone knows the smaller ones, and it is good exposure through this.”