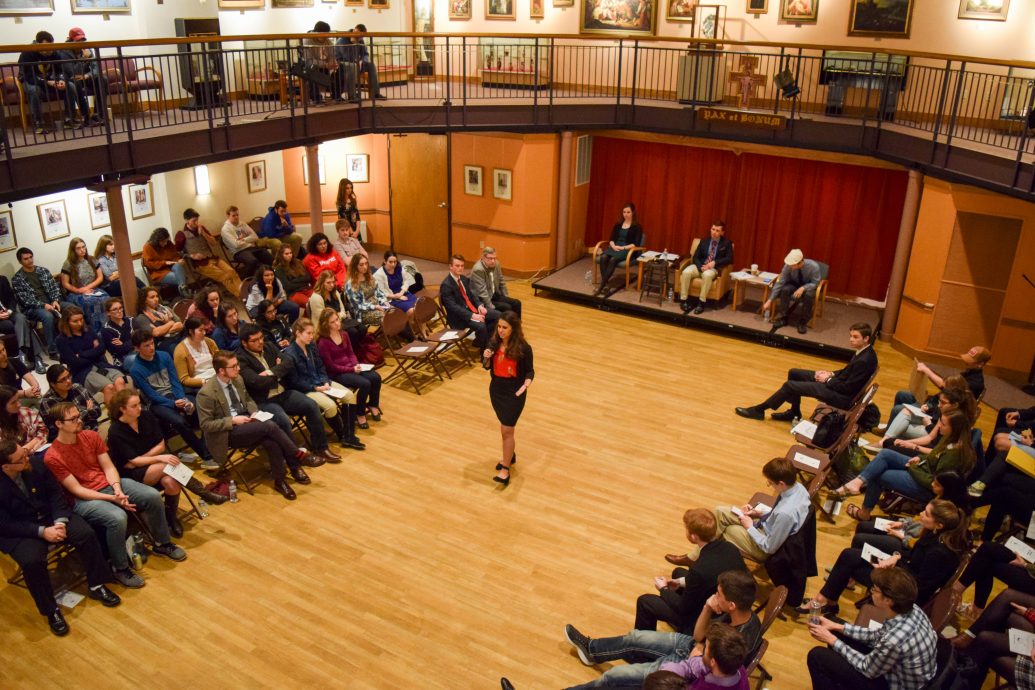 Over 150 students and visitors crammed into the Gentile Gallery on the evening of Dec. 2 for an explosive debate on President Trump’s immigration policies, Catholic social teaching and open borders.

The motion of the evening, “This House believes that Trump’s approach to immigration is not in line with Catholic values,” was affirmed in a majority vote due to the strength of the arguments made against Trump’s immigration policies.

The debate began with a series of prepared speeches for each side before opening up the floor to anyone who wished to debate.

On the affirming side, Joseph Zoric, who holds a master’s degree in economics, opened the debate with the words, “I am the grandson of poor, illiterate immigrants, and here I am, a college professor.” Zoric argued that the country’s founding principles demand that America welcome the hurting, oppressed and lost.

According to Zoric, 85 percent of Haitians who escaped poverty did so by immigrating to America, and Zoric said that Catholics have a duty to aid the poor.

On the opposing side, Jeremiah Poff, a senior communication arts and human life studies student, said that as Americans, “We need (immigrants) to represent our values.” Poff argued that Trump’s immigrations policies, such as the E-Verify system, increase protection for indigenous American citizens and allow America to provide a safer home to all.

Countering Poff’s argument, freshman political science student Alex McKenna appealed to the audience’s compassion by quoting the Statue of Liberty’s plaque, saying, “Give me your tired, your poor.” McKenna argued that E-Verify holds destitute potential immigrants to an impossible standard.

In response, senior theology student Marissa Eckelkamp asked whether illegal immigrants were criminals or Americans at heart, arguing that increased border control as implemented by Trump would better regulate which immigrants enter the country.

When the floor was opened to public debate, the crowd erupted with emotional stomps and hisses according to whether they agreed or disagreed with the 20-some speakers. Many speakers mentioned Catholic social teaching, human dignity and family stories of immigration.

Making the final speech of the night, Eckelkamp told her grandparents’ immigration story. She ended the debate with the words, “My grandparents came to this country legally, and I am very proud of that.”

The motion was affirmed with 46 votes in favor, 39 against and 30 abstentions.

This event was the Veritas Society’s third and final Dumb Ox debate of the semester.