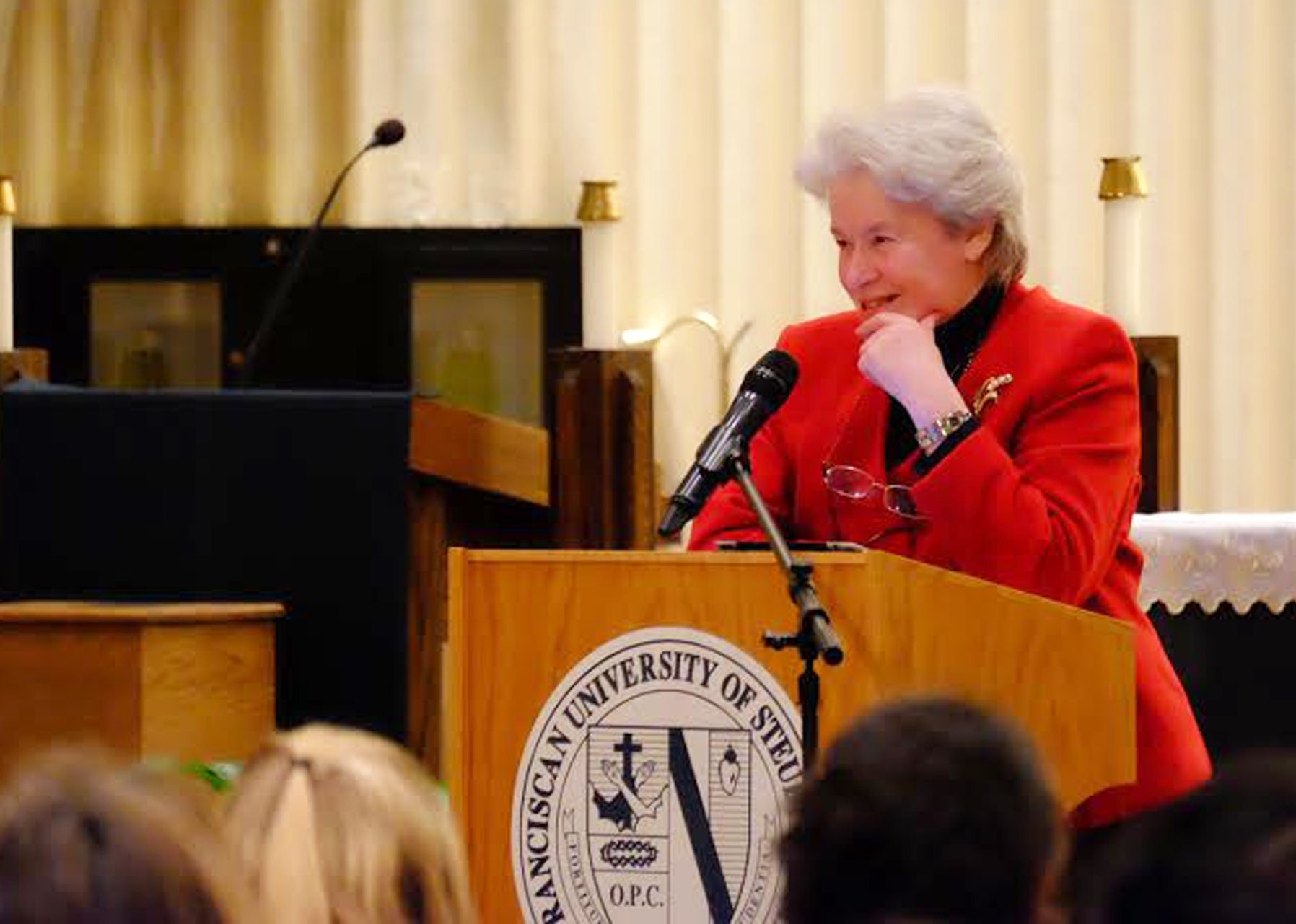 The claim to an explanation of the mysterious apparitions of Lourdes drew many to Christ the King Chapel on Feb. 16.

Guest speaker Barbara Davies, coordinator of the new evangelization for the Diocese of Shrewsbury, England, and who lived in Lourdes for 33 years, gave a talk entitled “St. Bernadette and the Meaning of Apparitions.”

Davies emphasized that Lourdes is not about the physical cures of the sick.

“Lourdes is about the redemption,” said Davies, “the Father sending His Son …. Priests will tell you the greatest cures take place in the confessionals.”

The key message of Lourdes, according to Davies, is that of penance. When Our Lady invited Bernadette to penance, she chose things that a “weak girl” could do.

“Mary is bringing Bernadette to the suffering of Christ in a way that a child can enter into it,” said Davies. Despite the smallness of the penances, she added, “anything we hand over to Christ he uses way beyond anything we can do.”

Davies detailed the background of St. Bernadette’s family, including her father’s imprisonment, her family’s housing in an old jail, and an aunt who resented her, in order to place emphasis on how Bernadette truly was the lowest of the low, and too insignificant, yet someone to whom an apparition would occur.

Through explaining the details of each apparition Bernadette experienced, Davies brought out the “harmony and structure” of the entire experience, which reflected the structure of the rosary.

Davies said that there is no such thing as a coincidence, and the incredible timing showed Gods true presence.

“Unless we are prepared to enter into silence and submit to his terms and timing, then we won’t even hear the word of God,” said Davies. “Our pain with our relationship with God comes from the fact that we have wrong expectations.”

Davies said, “(The message of Lourdes can) bring us up from the grotto of our lives and bring us up into the light of the Son.”

Davies was introduced by Petroc Willey, who holds a doctorate in philosophy, and is also originally from the Diocese of Shrewsbury.

Bethany Muczynski, freshman, said “I was really impressed with Bernadette’s humility … and it was really eye opening to see how (Davies) laid out the dates.”

Junior Abbey Thompson said, “(I was struck by) the fact that (Our Lady) went to Bernadette and reverenced her was so profound.”

2017-03-04
Previous Post: Missionary priest calls students on to a bigger life
Next Post: Professor opens students’ eyes on the meaning of charismatic renewal