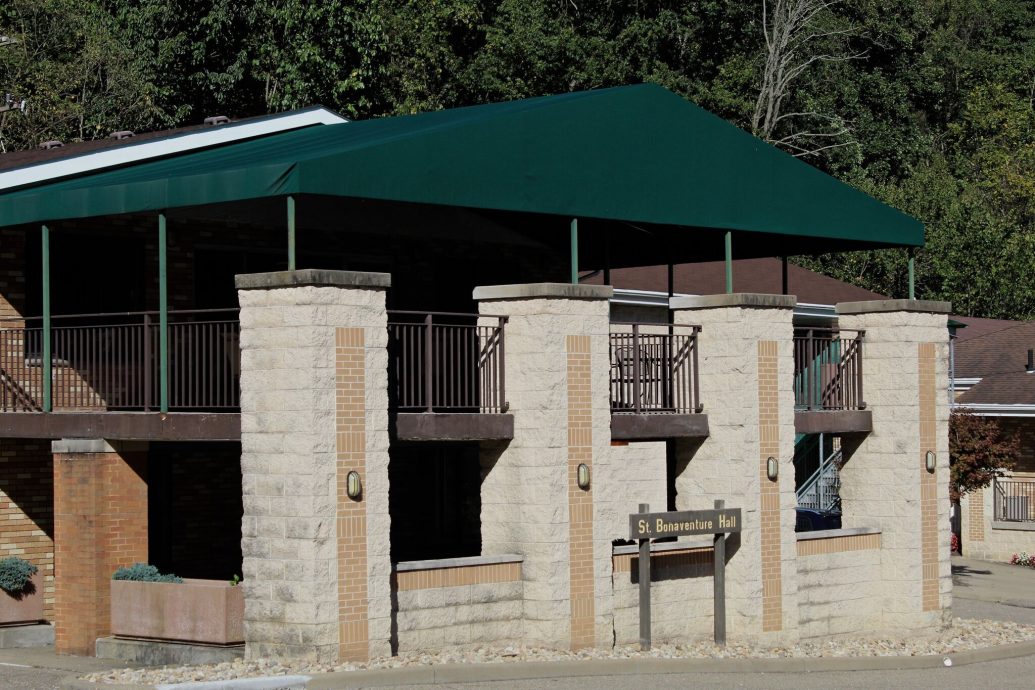 With the reopening of Bonaventure Hall on lower campus this fall semester, graduate and non-traditional (GNT) students at Franciscan University of Steubenville now have a place to call home and a community of their own.

Internal damage to the building, including mildew under the carpets and paneling, chased undergraduate residents away from Bonaventure Hall when it shut down in the fall semester of 2018. But some new flooring and fresh coats of paint have made the building habitable and homey once more.

This former hotel-turned-residence hall is part of a new program on campus to give GNT students an anchor in the community. Before the reopening of Bonaventure, GNT students were housed in Assisi Heights, where they struggled to build a community of their own.

Joe Silva, graduate student and new residence director of Bonaventure hall, expressed how difficult it has been in the past to build up a community that was able to attract the GNT students. “It was really hard to do outreach with a community like that when you didn’t have a home base,” he said. “You are trying to do outreach with a group of people who are often just over the college experience because they are already graduate students.”

Initiating a program which appeals to these older students has been difficult, but Silva thinks that Franciscan is off to a good start and is excited to watch the program grow and expand. Despite the hurdles of the past, now that they have a central location of their own, Silva hopes it will grow quickly. “I think we will probably get more next year,” he said, “and we’ll be able to open more of the rooms for housing.”

A coed residence hall, Bonaventure provides each student with an individual dorm, air–conditioning and a personal restroom. There are currently 12 students in residence, but this number is expected to go up as the program grows.

Community life for GNT students in Bonaventure is already off to a vibrant start with monthly holy hours and potluck brunches on Sundays. Additionally, Bonaventure hosts Theology on Tap sessions. Before moving to Bonaventure Hall, hosting these events was a struggle for the GNT community, with events being held at the homes of various students and suffering from a general lack of structure.

In progress are plans to reinstall a chapel in Bonaventure Hall. While there was originally one in the building when it was an undergraduate dorm, it was removed when the building closed down. “Having the chapel really creates and instills that sense of home that we have on campus,” Silva said, “because if the Lord is present, so is everyone else. That would be a big blessing.”

Sr. Maria Immaculata Glofcheskie, a graduate resident in Bonaventure, shares this sentiment. “My hope for Bonaventure Hall,” she said, “is that one day there will be the presence of the Blessed Sacrament.”

As room director in Bonaventure Hall, Silva is eager to incorporate the spirit of Franciscan that he found during his years as an undergraduate student. Although Bonaventure can feel like it is disconnected from the upper campus, Silva wants to avoid that sensation and instead bring a feeling of connected community to this portion of lower campus.

“I want to incorporate a sense of belonging for GNT students,” he said. “I want it to be where I walk into the TV lounge in Bonaventure and I know that someone will be along that I can have a conversation with. You’re not just alone in an old building on lower campus.”

Glofcheskie shared how she has enjoyed the feeling of peace which exists throughout the dorm. “There is a real sense of fraternal life and charity where the students strive to build each other up and support one another,” she said.

When it comes to the infamous trek up the university hill, most students are content to walk, but several have their own cars and are able to avoid the arduous hike. Silva says it would be ideal to have a shuttle service provided but realizes that they would have to build their numbers considerably to warrant such accommodations. “A shuttle system would be nice,” Silva said. “Or I don’t know, just give us a ski lift or something.”

Silva doesn’t think that the distance from upper campus will affect their community life as long as they work to build up their own central hub.

“I really want to make lower campus feel like it is still a part of campus,” he said. “Because that meant a lot to me as an undergraduate, just feeling at home.”