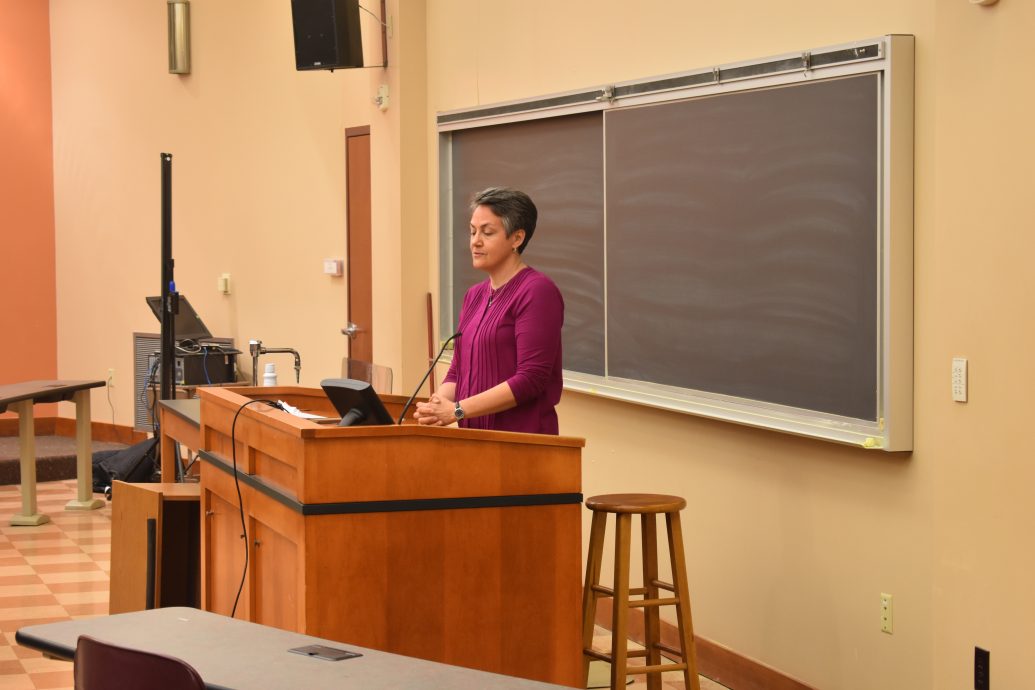 Society sponsored a counseling presentation at 7 p.m. in Pugliese Auditorium featuring an alumnus.

Margaret Vasquez graduated from Franciscan with a bachelor of arts in theology and later returned to complete her masters in mental health counseling. Vasquez said she developed the neuro-reformatting and integration adaption of the instinctual trauma response treatment.

Vasquez said she grew up in a dysfunctional home and experienced childhood trauma. While finishing her masters at Franciscan, she underwent instinctual trauma response treatment to successfully treat her past trauma.

Vasquez said, “I became a big believer in that method of treatment.”

Vasquez focused a large part of her presentation on how to build rapport with patients and shared personal stories of how she was able to do so.

Vasquez said, “I notice if someone brought up something to me that was beautiful, it tended to be this profound moment of connection to God, to self or to others.”

Vasquez said, “The core is being known — which I would go back to Genesis for that — being seen and heard is very good.”

After being known, Vasquez said the next level of connectedness was being valued, followed by respect of boundaries and finally openness.

Vasquez said that connectedness with self helps a person connect with patients.

“I have also learned we tend to connect to others to the extent we have connected to ourselves,” said Vasquez.

Vasquez concluded her presentation by answering questions from the audience and said, “Go be compassionate.”

Junior Kateri Lock said, “What struck me was the integration of psychology with theology since I think the body composite is so important, but so often we isolate the two. I think she had a very holistic view.”

2021-03-15
Previous Post: Speaker shares how St. Joseph can be spiritual father for all
Next Post: Lady Barons soccer triumphs over Bethany